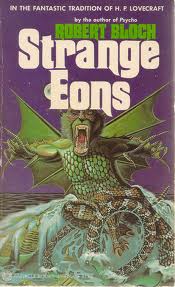 The late 1970s were a curious crossroads in the recognition of the life works of one Howard Phillip Lovecraft. By this point, his work had acquired a respectable cult following, but was still terribly hard to find outside of Arkham House reprints (a state of affairs that would remain true until, maybe, sometime in the mid-1990s). A new generation of writers such as Stephen King, Clive Barker and Ramsey Campbell were coming up in the literary world with new twists and turns to the horror genre that the most-honest among them would acknowledge was built on the rock-solid foundation left by the Lovecraft Circle. Of that fabled circle, there were only three members left: Donald Wandrei, Frank Belknap Long, and the man who had since become famous as the original scribe of Psycho since Hitchcock’s adaptation of it in 1960, Robert Bloch.

This period was an equally curious transition time for America, the twilight period between Watergate and Reagan’s Morning in America. The Bicentennial had been celebrated in 1976, but not much else about the era was worth jumping for joy about. From the first-ever resignation of a U.S. President to the end of the costly mistake that was the Vietnam War to the Arab oil embargo to the Iran Hostage Crisis that consumed the Carter presidency, the national psyche was reeling from one body blow after another. Add widespread urban decay, racial polarisation that had followed the successful Civil Rights movements of the 1960s, the beginning of the feminist and gay rights movements, and the ever-present menace of the nukes starting to fly (the latter being true of all decades of the Cold War) and you had a very fertile recruiting ground for the Christian fundamentalists, as well as the smaller players, which ranged from 1960s holdovers like the Hare Krishnas and Neo-Pagans to newer groups like UFO cults and Scientology. The overall mood of pessimism was probably best expressed by Harlan Ellison in “Reaping the Whirlwind”, his introduction to his early 1970s short story collection, Approaching Oblivion: “You’re approaching oblivion – you know it – and you won’t do a thing to save yourselves.”

Into this curious mixture of literary and social culture, Bloch dropped a novel that was, in many ways, the last hurrah of the Lovecraft Circle itself: Strange Eons. I refuse to own any copy of it other than the original Pinnacle Books paperback, which has a fantastic front cover of a creature rising from the sea like Godzilla on amphetamines. There are a power and force to that original image that are more than matched by the story. This novel is to the grand cycle of tales that Lovecraft conceived what Frank Miller’s The Dark Knight Returns would later be to the Batman mythos: an ending to the story that pays tribute to the roots it is referencing.

There are no chapters to this novel, only three sections. Each is labeled with a one-word title: “Now”, “Later” and “Soon”. Simple, everyday words that just hang there like storm clouds or grim harbingers of doom. Each section follows the track of one protagonist, all of whom find themselves following the trail that Lovecraft’s stories had suggested. In “Now”, we meet Albert Keith, a wealthy dilettante who has developed a barely-acknowledged mania about collecting things. He finds a certain picture in a small shop on South Alvarado Street in Los Angeles of a hominid creature with distinctly canine features. The shop owner gives it to him for $500 and lets him know that it came from an abandoned storage facility back East that has held onto it, and a lot of other things, for forty or fifty years. A friend of Keith’s sees the painting later and then clues him in to the works of H.P. Lovecraft. The friend had always thought that the works were fictional, of course, but the uncovering of the artist’s signature on the dusty painting starts a chain of events that make both men question every assumption that they ever had about what is and is not real. Every step of the way, they are hunted by mysterious pursuers who have a vested interest in keeping their discoveries from ever seeing the light of day.

Of all the sections in the book, this one is the most fun, especially if you already are in the know about HPL. That said, Bloch goes to great lengths to give people who are just hearing about Lovecraft for the first time a crash course in the man’s life, works and personal relationships. Infodump is a sometimes-sad necessity when you are trying to fill in readers to elements about which they may have no knowledge, but any writer who does this regularly could do worse than study how Bloch accomplishes it here. The various deaths in this section are perhaps the best illustration of that, referencing everything from “The Lurking Fear” to “The Statement of Randolph Carter” in the demise of people who learn way too much. Albert Keith himself finishes this section on a certain set of coordinates in the South Pacific which should be familiar to anyone who has read “Call of Cthulhu”.

“Later” picks up the tale of Keith’s ex-wife, Kay Keith (whom, one suspects, was based on HPL’s one-time wife, Sonia Greene, just as Keith himself had certain correlations to HPL himself). Though they have long since gone their separate ways, she finds herself unable to walk away from the mystery of her ex-husband’s disappearance. In a seemingly coincidental vein (or is it?), her modeling work puts her in contact with the Starry Wisdom Temple, headed by one Reverend Nye, who has the most extreme example of black skin pigmentation that she has ever seen. She wants to turn him down flat, but something she spots in his office convinces her that he might know something about what happened to Albert. She has no idea, until the very end of this section, how accurate that surmise is.

This is the longest section of the book, easily twice the length of “Now” (I would not put it past Bloch to have called this section “Later” for that fact alone, as it seems like a good writer’s in-joke), and it is a slow spiral into paranoia that sadly proves to be more than justified. In spite of that, the storytelling is every bit as streamlined as “Now”, just much, much busier. Kay winds up finding out the inner secrets of the Starry Wisdom Temple and becoming involved in a government task force that takes them back to where Albert disappeared. Along the way, we get allusions to Bloch’s long-time fascination with Egyptian gods, his equally long-time pessimism about the ability of law enforcement to actually deal with problems, yet more Lovecraft references (though not nearly as many as in “Now”), and one of the most insightful critiques of modern religious movements ever written in fiction. Any atheists out there who want to argue against Christian fundamentalists should commit Reverend Nye’s speech on pages 98 through 99 to memory. That Bloch wrote this in 1978, just before the Christian fundamentalists came into massive social and political power, is remarkable. But writers always tend to be closer to the social pulse than most people.

We conclude our tale with “Soon”, the most threatening of the section titles by far. Twenty-five years have passed since the conclusion of the last section. Lovecraft’s works have been effectively – if covertly – suppressed by governments worldwide, much like the mystic tomes of his stories. Nobody really notices it, of course, but Mark Dixon, junior researcher for a Los Angeles newspaper, begins to notice a pattern springing from the widespread terror campaign orchestrated by the Black Brotherhood. In fact, we start off this section with the assassination of L.A.’s mayor. Following the thread of information leads him to his guardian, Judson Moybridge, who has knowledge of what is truly going on that he is keeping from his charge. In the ruins of the long-awaited earthquake of California folk legend known as the Big One, Dixon learns about his true heritage and the role he will play in the new order to come.

I honestly wish I could say more about this one, but I can’t. To do that would be to give the story away, which I steadfastly refuse to do. This section is pure, relentless, elemental horror on the order of the Biblical Apocalypse…only, the Bible, God and anything else from the Abrahamic faiths have absolutely nothing to do with what goes down. This section is out to get you, pure and simple, put an ice-cold hand on your heart and give it a hard squeeze. There is one last, direct allusion to one of Lovecraft’s most famous stories that figures into the plot, but leave it to Bloch to make that final twist to it a hundred times more terrible. I do not recommend reading this section late at night. You may come to the same conclusion that Kevin Pollack comes to in the old Arnie action film, End of Days: “All right, it’s official. I’m never sleeping again.”

There does seem an aptness to doing a review of Strange Eons this year. Not just because of the 2012 hysteria, but also due to the fact that we once again stand at a cultural crossroads. Lovecraft now has more of his work available than ever before. Some of the most famous movies of the last thirty years – Alien, Ghostbusters, Predator, even, to a certain extent, Thor – seem to be taking their cue from the man’s work. Worthy successors from Joe R. Lansdale to Guillermo Del Toro are developing his themes in ways unimagined at the time of his death. Culturally, America once again finds itself at a crossroads. We ultimately won the Cold War, but wound up with a more unstable world that gave us 9/11. We have aped our previous misadventures in Indochina with occupation follies in Afghanistan and Iraq. Gay rights have gone from being fringe to mainstream over the course of twenty years. The fresh-faced revolutionaries of America’s right wing have become the old guard with all the connotations that designation implies. A decade of economic mismanagement has utterly stranded a generation of kids who are finding themselves on the losing end of the economic scale. Gas prices are now three times the price they were during the height of the Arab oil embargo. In short, it seems like the stars are right for Strange Eons to be found once again.

You can buy Strange Eons from Amazon.com.