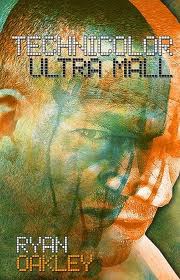 “Every cheap hood makes a bargain with the world,” claimed The Clash in “Death or Glory” – an “ancient poem” referenced in Ryan Oakley’s bleak Technicolor Ultra Mall.

Its main character, 16-year-old Budgie, is a little less cheap after being upgraded in value for killing a rival gang leader, but he’s definitely questioning the whole bargain he’s made by becoming a Vidicon. They’re one of the gangs working the red level of the mall that is the whole world of this story. Killed in the same fight was Budgie’s comrade, Sputnik. Only trouble is, Sputnik was more than Budgie’s comrade. He was, as other members of the gang jeeringly note, a friend, that troublesome relationship that’s sand in the gears of commerce. The drugs he pops – one blatantly termed ‘synapacide’ – just aren’t getting rid of the thought that the unwritten “rulebook” that keeps everything cricket in and between gangs isn’t worth it, anymore, that loyalty to a gang that conducts occasional human sacrifices of its own members is not something he values. He’s just product to them.

Into his life comes Harmony, a young Vidicon girl who terrifies her male comrades. A legendary perpetrator of a vengeful genital mutilation on two rival gang members, Harmony is not all she seems. She is fierce, but, unlike Budgie and almost everyone else in this book, she refuses to be manipulated by the mass media and its memes, and the marketing that permeates every level of the mall. She’s been known to forsake TV for a book. And she is genuinely touched that Budgie grieves for Sputnik.

The first third of this novel is somewhat unpleasant. I’ve never been a big fan of the romantic criminal or criminal-as-revolutionary idea. None of these characters is pleasant and there is almost no science-fictional tech mentioned in this part of the novel, beyond some hints of an advanced biotech that creates the market for human corpses serviced by the ghouls of the mall’s alleys. But Oakley has one big talent. He does a very nice job with the dialogue and characterisation of these lowlifes and somehow, reluctantly, I came to care about Budgie and Harmony. When he’s not carrying the plot of the main characters forward in the “Feature Program” chapters, he has lots of fake ads – many with real brand names – in the “Product Placement” sections and subplots with middle-class, green-level characters in “Channel Surfing” chapters. That helped with the variety and I’m a sucker for anything that comes close to mimicking that modernistic style of John Dos Passos that was brought into science fiction with John Brunner in the late 1960s, but underused since then.

But I genuinely got caught up in the plot when Budgie decides to defect from the Vidicons and get a job on the green level. Unlike many red-level residents, he’s not “chipped” – permanently exiled there and tracked via a brain implant. He earns the murderous wrath of Griff, an initiate fanatically devoted to the rulebook, for sparing another defector’s life. Several subplots come together. TeeVee starts to ominously say, “I am inevitable,” as he gets weirder and deadlier. What is he up to with his new music marketing campaign? We learn more of this world’s details and history. Certain characters shed their criminal cool when seen through the new, more weary and knowing, eyes of Budgie.

This is pretty obviously a satire on marketing and media manipulation. A quote from Newton Minow’s famous “TV is a vast wasteland” speech opens the book. And, in case you still don’t get the point, there are those names, ‘TeeVee’ and ‘Sitcom’. I don’t, however clever and grim it is to have a world where everyone drugs themselves constantly, where you have to pay the toilet paper dispenser in your own hovel, and friends charge each other for cigarettes, think Oakley has much new to say on advertising or the media. But I did appreciate coming to root for Budgie and Harmony in a way I didn’t expect, and the conclusion, which avoids the easy cliche of social revolution.

A cover blurb says this is the kind of thing Philip K. Dick would be writing today. To me, its plot of gangs and music and media-induced mayhem was more reminiscent of Norman Spinrad’s work, particularly Little Heroes and “The Big Flash”. If you like your fiction efficient, with a lot of violence and a little transcendence mixed in with the bleakness, this is the book for you.

You can find Technicolor Ultra Mall on Amazon.com.