Do I really need to sell anyone on Laird Barron at this point? With three collections (counting this one) and two novels under his belt, he’s not so much the next big thing in horror as he is the 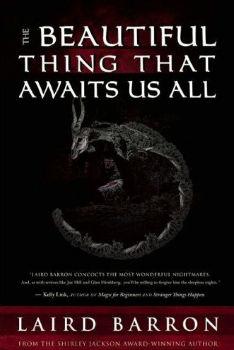 current big thing, and justifiably so. While he broke onto the scene as maybe the finest modern practitioner of true cosmic horror, and one of the only people around seriously and consistently turning it out without resorting to pastiches of Lovecraft’s Mythos, he has since gone one better than that and created what will one day no doubt become a Mythos of his own.

From stories set in and around Ransom Hollow and the Black Ram Lodge, to shared symbols (a broken Ouroboros features prominently in the tales and on the cover of The Beautiful Thing That Awaits Us All), even a re-occurring fictional book, Barron’s stories have all the trappings of a Mythos in the making. And though they inhabit many different settings and points in time, they are so thematically and narratively interwoven that it can be difficult to extricate them from one-another. And, fundamentally, extricating them sometimes feels like a futile exercise. For all that they stand just fine on their own, they function even better as a gestalt, a blended tapestry of crushing, unyielding, inescapable dread as palpable as any that has ever been summoned up since the Old Gent’s time.

Indeed, if there’s any complaint to be leveled against The Beautiful Thing That Awaits Us All, it may be that the stories join together almost too seamlessly, and it can sometimes be difficult to remember where one stops and another begins. But then again, that could just as easily be a feature as a bug, a literal reproduction of the phantasmagoric dislocation that features so prominently in Barron’s work. And for every mythology-heavy story that sends out tendrils into Barron’s other tales, there’s an entirely self-contained ghost story, like “The Redfield Girls,” that still manages to carry all the same resonances of fathomless dread.

For the dedicated reader of Laird Barron, you already know what sorts of things you can expect from The Beautiful Thing That Awaits Us All. Tough, damaged characters experiencing the intersections of their own brutal lives with forces vast and infinitely more brutal. Narratives that inevitably break down into events both ghoulish and barely comprehensible, and yet, completely hypnotic. Some of the best stories in the book approach themes and locations already touched on in other stories but from entirely new time periods and angles, like “Blackwood’s Baby,” “Hand of Glory,” or “The Men from Porlock.” Others, like “More Dark” and “Vastation,” may surprise with their unexpected playfulness, while still maintain the building sense of total unease that exists throughout the collection. Only one of the stories is original to this volume, though it may also be my favorite of the bunch. “The Jaws of Saturn” begins with a familiar horrific image – Goya’s painting of Saturn devouring his children – and creates new images as indelible as anything I’ve read in some time.

For the dedicated reader of Barron, The Beautiful Thing That Awaits Us All is more of what you’ve come to expect – nay, crave: a master of the craft, working at the top of his game. For those who’re coming to Barron’s work for the first time here, you’re in for a treat and no mistake. I’d say something hokey about leaving the lights on, but really, lights on or off, it won’t do you much good either way.