[dropcap]T[/dropcap]he Bell Witch, by John F. D. Taff, is a ghost story based loosely upon the poltergeist legend from 19th century Tennessee, which has previously been adapted into the movie, An American Haunting, and might have served as inspiration for The Blair Witch Project. In this latest adaptation, the author shows how the Bell family endures this poltergeist over a 16-month period, and how they learn to come to terms with it. 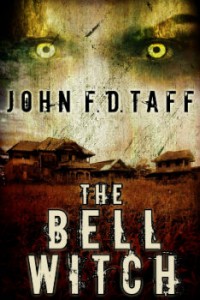 Jack and Lucy Bell run a busy household with the help of their slaves Naddy, Saloma, Anky, and Sam (who are a couple), as well as Adam (the eldest slave) and Harry a ten-year-old houseboy. Jack and Lucy’s eldest children John and Betsy help as well as they can – between illness, fever and lack of sleep. But it is Jack and Lucy’s younger children Zach, Drewry and William, who leave the Bell property – something they are forbidden to do – and enter Mud Cave, a dark and slippery cavern where they are spooked by a disembodied voice that talks to them. The voice follows them to the Bells’ house and a haunting begins.

Eerie noises, sounds and whispers become commonplace. Over time, fear infects not only the Bells, but all the people of Adams, and the occurrences manifest further into an oppressive presence that will not be ignored. The entity, referred to as the ‘Bell Witch,’ toys with the family, confuses them about what they think it is, becomes tangible/intangible, disappears for days, and then talks ceaselessly. The children are terrorized and the slaves avoid the house as much as they can. Jack Bell might know who the mysterious Witch is, but refuses to tell.

The cast of characters is large and extends beyond the Bell household. There is Richard Powell, a schoolteacher who loves Betsy. There’s Reverend Johnson, the local priest of Adams. You also have Kramer, the German who built the Bell’s chimney, and Hank Gardner, who also loves Betsy and wishes to marry her. There is a local doctor, Doc Hopson, who tries everything to help them, procuring vials and tonics that the Witch corrupts. And the Witch, of course, is a major character in her own right, though her motives remain obscure. Eventually, it becomes evident that the Witch is somehow linked to Betsy, and at times possesses her and the children, which reminds one of the movies, The Exorcist and The Omen.

Throughout The Bell Witch, the actions and choices of each character are overshadowed by the witch’s presence. She becomes deceptive, comical, even awkward, hurting and humiliating the Bells. She is the star of the story.

Ultimately, The Bell Witch is a creepy tale of how a family tries to forget their past. But some things can’t be buried away and a confrontation will take place. An interesting read overall, it manages to keep the reader invested in the characters and their effort to deal with, or try to overcome, this strange and constant entity. If you like historical horror and ghost stories, you might want to give this a try.