Penny Crescent is a typical street in a typical country town about three hours from London. Several families live there, but we’re 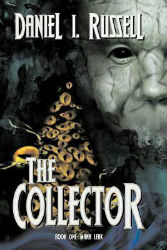 concerned with three – three families with very different approaches to life…What they have in common is an attachment to their ghosts.

Frank and Anne Harper have two adorable children, Charlie and Bronwyn. They appear to be your typical nuclear family. Frank teaches physics in the local comprehensive school. Anne is a stay-at-home mother. Behind the charming façade are ugly secrets; one of them concerns their dead daughter Katie.

The Deans, Jenni and her twin sons Adam and Jake, embody the idea of dysfunctional. Since the death of her husband Harold, Jenni has descended into slobbish despair, wallowing in self-pity, allowing her teenage sons to rampage unchecked through the community.

Joseph McGuire worries about his grandmother Eleanor. He wants her to sell her house and move into London to be nearer to him. She refuses because she doesn’t want to leave the home she shared with her beloved husband Arthur, whom she has been desperately trying to contact.

They are about to discover that holding on to the past can be dangerous – very, very dangerous.
Penny Crescent isn’t a happy place – not really. The Dean twins, bored and unsupervised, frequently stoned and drunk, taunt and terrorise their neighbours. Frank Harper, usually strung out on coffee, lives for order and logic, for rules and control. When these are threatened, he fights back with his fists. Eleanor lives in a world of books and make-believe.

When the story begins, Frank has been ordered to take some extra time off from work to ‘rest.’ Furious at this insult, he arrives home spoiling for a fight. Anne, still in pain from a previous beating, employs every tactic she knows to prevent him from pounding her again. Enraged, he storms out to spend the night with his teenage girlfriend, taunted by the Dean boys as he goes. Everyone knows what he does to Anne behind closed doors.

Later, the boys roar off on their motorbike and steal money from an old women to buy drugs. Only in the McGuire house does calm and friendship reign. Joe arrives for the weekend. He and Eleanor have a quiet evening, disturbed only by the incessant barking of the Harper’s dog Betsey. Later, Joe goes over to check on the dog and is disturbed by Anne Harper’s anxious face.

As night settles over the town, a violent storm blows in, attacking the houses. In the morning, strange things begin to occur. Eleanor is woken by the smell of bacon frying, something Arthur used to do for her. Since Arthur’s death, she has amassed a vast collection of occult books and material. Consulting one, she discovers: “The sudden arrival of a mysterious odour with no apparent source is also a sign of a supernatural presence.” So, who or what is this presence? Sadly for Eleanor, it’s not Arthur. A supernatural presence has indeed arrived, The Collector.

Sent from a mysterious underground kingdom called “The City,” he is in Penny Crescent to gather a quantity of missing mana. We learn that mana is a kind of force that powers life and which leaves the body on death, in the form of a visible blue light, to be returned to The City. Mana which persists in hanging around to be near the living becomes ghosts. Penny Crescent is the source of three missing portions and The Collector’s bosses, the Elders, want it back.

What ensues takes the form of increasingly vicious and bloody attacks on the members of these three families. The Collector sets a mechanical monster after the twins. It attacks them in their garage hideout, killing Adam. In a panic, Jenni and Jake run to the Harpers’ house for shelter. Joe and Eleanor arrive soon after, and the beleaguered group sets about trying to secure the house against invaders, boarding up doors and windows.

Daniel Russell has written an effectively creepy and gore-filled thriller, full of peculiar monsters like the giant, mechanical Megathon and the ravenous Montgomery, beast of insatiable appetite and countless sharp-toothed mouths. For me, the most horrific were the Prowlers, an army of spider-like (I hate spiders) creatures that attack in waves. This is Joe encountering one for the first time:

Legs, long and black, emerged from under the bed. They had the texture of burnt wood, and the tips ended in sharp points that sunk into the carpet. The joints high, the legs formed inverted Vs. Two narrow viciously hooked claws, similar to a crustacean, poked out. The linear appendages opened and slammed shut, snipping the air like living scissors….

Its crusty shell contained one huge, bulbous eye, the size of a football. It rotated left and right, sliding in its own clear slime.

Again and again throughout this endless nightmarish weekend, the Collector, always smiling, orchestrates sequences of terror in an attempt to frighten the inhabitants into returning the missing mana. When he realizes they no longer have it, his vengeance is chilling.

The letter accompanying the book informed me that The Collector has been a great success in Australia. I can well believe that. This book is truly frightening, with violent events and deaths escalating the terror, chapter by chapter. I read it during a long, snow-stormy weekend and was so frightened that I insisted my cat stay with me the entire time. With buckets of blood and black slimy bits, a couple of spectacularly gruesome murders, monsters straight from a demented imagination, as well as violence and suspense that builds and builds, I can whole-heartedly recommend The Collector to readers looking for a proper horror experience.

You can buy The Collector, Book One: Mana Leak from Amazon.com.