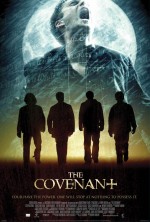 I had a hard time figuring out who was who in this flick, not because of an intricate script, but because everyone looked the same. It was like Invasion of the Preppy Clones.

The Covenant is a child of its time, a descendant of urban fantasy, which springs from the same well that gave us The Craft, Buffy the Vampire Slayer and, nowadays, Supernatural and The Vampire Diaries. In fact, this feels so much like a CW TV show, with its beautiful actors and slight tinge of soap opera, that I was almost expecting a commercial break to stop the monotony.

That is the great problem of the flick: despite all its digital special effects and the gorgeous leads, it is a bore. The film does nothing with its locations (Canada, once again substituting for New England). It’s like the director never saw a Hammer film or learned the uses and misuses of shadows and fog.

A pity, really, because there’s enough material here to produce a slick bit of film. Perhaps not something truly terrifying but a fun romp. I mean, I loved the films in which Julian Sands played a warlock (aptly titled ‘Warlock‘) and the thought of, not one but four, warlocks promenading across New England had a certain allure. Be warned: this film is nothing like Warlock and, although our four heroes are as good-looking as Mr. Sands ever was, they lack charisma and character. To compensate for that, we are given several scenes in which the hunks appear shirtless (and some scenes of women in their underwear and in the shower, too), as though the director has figured that the only way to keep the audience interested is to pass the film off as an underwear ad.

Ah, but you are wondering about the plot. Turns out that warlocks really do exist and there was a reason for those Salem trials after all. The Sons of Ipswich, descendants of Colonial-era warlocks, are super-powered high-schoolers, who can levitate or use telekinesis. In this movie, magic power is a genetic gift (Only the eldest male can become a warlock) and it has its drawbacks. It can become addictive and any warlock above the age of 18 will start to age quickly, the more he uses his power. The foursome Ipswich buddies feel something weird is happening in their little Massachusetts town, threatening their power. Caleb, leader of the pack, sets out to find the person behind it all. This leads to…a whole of digital special effects. The movie also has some homoeroticism, which seems to be completely unintended, but this does nothing to elevate the proceedings (though it might have made it more interesting if these young men actually had a same-sex romantic relationship). Perhaps to counteract the audience’s inkling that this is a tale about teenage gay warlocks, the movie serves us a limp, romantic heterosexual couple.

Sarah, the new kid in school, is soon paired off with Caleb. For a while, I thought she might be the secret “fifth warlock”, which would have been a fun and unexpected twist, as all these men think magic power can only be employed by males. Alas, no. Sarah’s only reason for existing is to give us a female object of affection for Caleb. Ultimately, the movie might have been better off without her and some more character development in her place. I literally knew nothing about anyone except for Caleb. However, considering what I did learn, which is that powerful male warlocks use their gifts to pull up a girl’s skirt or throw kegs at each other, perhaps it was all for the best.

The Covenant is available through Amazon.com