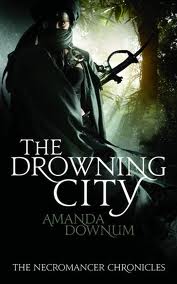 In The Drowning City, Amanda Downum has created a phantasmagoria that combines elements of the Orient, the Middle East and Medieval Spain. The city in question, Symir, is built on the banks of the powerful river Mir that flows from a barely dormant volcano. A network of canals that control its meandering courses through the city is also home to a host of dangerous water sprites. The river and many other natural forces are as important to the story as the humans, demons, mages, and necromancers that people the pages of the book.

Magic is everywhere – from the simple sigils scratched into canal banks, that prevent nakh, water demons, from attacking citizens, to ward-posts along trails to weave, “a spell to hold the stones steady if the earth shook. Isyllt wasn’t sure she understood the intricacies of it, but the implication was unsettling.”

The young and greedy Assari Emperor Rahal al Seth has been casting covetous eyes on Selafaï, a kingdom to the north and west of the Assari Empire. Into this churning physical cauldron comes Isyllt Iskaldur – necromancer, spy and agent of the secret police of Selafaï. Isyllt and her party have been sent to Symir to seek out, encourage and offer funds to rebel groups opposing the occupant of The Lion Throne. With her is Adam, her nominal bodyguard, work partner and co-conspirator; and Xinai, another bodyguard who is originally from Symir and is Adam’s lover. This bittersweet return to the place of her birth will have far-reaching consequences for all of them.

There are two main rebel factions: The Jade Tigers, led by Jabbor Lhun, believe in mostly peaceful acts against the Emperor, while the much-more-violent Dei Tranh, led by Xinai’s auntie, Selei, are committed to extreme violence and include a battalion of angry ghosts, the Ki Dai.

Once Isyllt and her party arrive in Symir with a lift from customs official Anhai Xian Mar, the game is afoot. Now it seems that everybody they meet is related to, or involved with, one group or another – or maybe several.

Anhai’s niece, Lilani, has been possessed by the ghost of her grandmother, Deilin Xian. Isyllt exorcises the ghost and binds her spirit into her Necromancer’s diamond cage, thereby making valuable friends of Anhai and Lilani’s mother Vienh.

Other friends in Symir include the Mage, Vasilios of Medea and his apprentice Zhirin Lai. Her mother, Fei Minh Lai, is a member of the government, the Kas. Since becoming Jabbor Lhun’s lover, Zhirin has been persuaded to assist the Jade Tigers. Her involvement with Jabbor, the group and Isyllt will change many lives forever.

Members or employees of the Kas important to the plot include: Faraj al Ghassan, Viceroy of Symir and his family, and the enigmatic Asheris, a mage employed by the Kas police. Possessing great internal power, he is able to control fire. Isyllt is attracted and disturbed by him in equal measure.

This is a book that doesn’t waste any time. From the first page, plots, counterplots, firebombing, terrorist acts, arrests, and kidnappings explode across the landscape. A key factor in the unfolding events is the precious gemstones secretly mined by enslaved prisoners. Charged with magic, these provide a major source of income for Symir and the Asseri Empire. The normal stones, rubies and sapphires, are used for making and breaking spells. More rare, powerful and dangerous are diamonds, mainly used by Necromancers to cage the souls of ghosts who have committed crimes against the living.

With all the characters assembled and activated, what happens and how are the meat, bones and blood of the book, and include a surprising last-minute transformation that I didn’t see coming. The book races along like a tribe of wild Tartars galloping across the steppes, ravishing and pillaging with delight. Isyllt is an imperfect super-heroine. Sometimes, she drinks too much and wakes with ferocious hangovers, often following her heart and not her head – my kind of heroine.

It is rarely that I turn the last page of a book wishing there were another one or two hundred pages – or a sequel, especially a sequel. This was one of those times.

You can buy The Drowning City from Amazon.com.