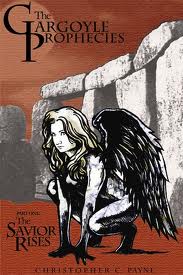 The Gargoyle Prophecies, a small-press urban fantasy, is the first in what promises to be a series that centres around a most improbable heroine: Stefani is a virgin topless dancer. As if that were not hard enough to believe, she is also the Chosen One (shades of Buffy) who will either lead the gargoyles into a new age or bring doom down upon them.

Stefani’s life was never that great. Her mother died before her eyes when she was a child and she never had a real father. She lives within strong walls she has created around herself, hoping that one day, she might be able to avenge her mother’s brutal slaying. Stefani’s dysfunctional world becomes a Norman Rockwell dreamscape compared to her new existence. She discovers gargoyles are real, not just stone carvings on old buildings, and in less than a week, on her 21st birthday, she will become one.

That is more than enough to drive someone mad, but it doesn’t stop there. The villains she encounters, and sometimes even her allies, play fierce tricks with her mind. Why does she fall asleep in the middle of an adventure, only to wake up in her apartment as if nothing has happened? Still, this is better than when she wakes up in the psych ward.

Stefani’s life quickly becomes a whirlwind of dangerous encounters and unexplained events. Doublecrosses and strange déjà vu abound, and for every answer, there are five more questions. Soon, the reader is wondering if this is an account of a heroine’s crazy life as she rushes around the world trying to find a ring with special powers, or just the sad story of a delusional mental patient in a hospital.

This book is a fun read, but there were a few places where I could predict what would happen next. Other events became a little routine: Stefani meets a new guy and he gets killed. Things get rough and she wakes up in the asylum again. And again. And again.

These issues are easy to overlook as the novel sweeps you into a new world where gargoyles are the things that move in the darkness. Much as the authors of White Wolf have done, Payne uses gargoyles as a tool to explain myths and changes in history, and it is enjoyable to allow yourself to be pulled along. It is nice to see an urban fantasy that employs a different creature besides a vampire. Payne’s unusual monsters deliver.