[dropcap]B[/dropcap]LACK SCREEN, HUSHED VOICEOVER: By the end, everyone knew about Stephen. About what he was into. About what 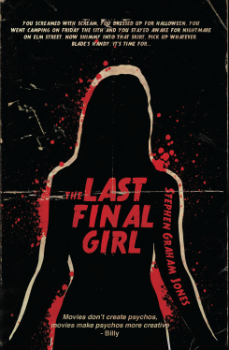 he did. Some people didn’t get it. Didn’t even try to understand. But there were those of us who did, those of us who still do, even after…everything. For us, he wasn’t just some guy spinning clever stories that spun round and round like reels of old school film, before everything went digital. He was us, only smarter, faster. Sharper.

A woman’s scream makes us jump in our seats, even if we were half-way expecting something like this after the quiet of that opening – this is a review of Stephen Graham Jones’s post-modern literary ode to slasher films, after all. The black of the screen lightens, revealing:

TIGHT SHOT OF A BARE FOOT HANGING OFF THE EDGE OF A COUCH: The foot doesn’t move and the shot comes into focus. We see light flickering across it in the dim room and a horrible, protracted choking noise. The dolly tracks up the couch, up the body, revealing a TALL MAN WITH BEAUTIFUL HAIR who’s leaning back into the cushions, a look of sublime concentration on his face. JONES. That awful audio is still playing, but just in case we’re not sure if this dude’s somehow making it in the back of his throat, he opens his mouth and pops in a handful of SIXLETS, the sound of his hard, glistening teeth gnashing the candy drowning out the choking sound.

Another flicker of rapturous white light across his features clues us in.The TV he’s watching has some kind of sick horror movie playing. Then he turns to face the camera. The warm, welcoming expression on his face is way creepier than any cold detachment we might have expected. Then, just NEW NIGHTMARING through that fourth wall, JONES scoots over, making room on the couch and, as if we had any choice anymore, pats the cushion beside him. JONES wants us to have a seat and the POV SHOT obeys. JONES wants to show us something. JONES wants us to eat his candy.

The POV glides around the couch, too smooth for found footage, and we take in the rest of the room. There are skulls everywhere. Plastic ones hanging from the ceiling, paper cut-outs stuck to the walls. There’s a jack-o-lantern-shaped candy pail resting on top of the TV and we almost relax, until we remember that Halloween is a long way off. But for JONES, every day is HALLOWEEN. As the POV settles down next to JONES the shot pans back over the TV. While the screen is too bright to see, what’s holding it up isn’t:

Rather than a cheap stand, JONES’ television is resting atop a meticulously stacked pillar of movies. No scrawny DVDs here, though there might be a LASERDIC or BETAMAX tape poking out on the edges. Supporting the base are the oversized, cardboard, GORGON video boxes and a few plastic ANCHOR BAY clamshells, but the bulk of the collection is the cheapest of the cheap VHS sleeves, their spines luridly exposed for our inspection. Half the fun is seeing how many titles we can recognize before we’re on to the next shot, the next reference; how many MASSACREs can JONES fit on the head of a pin? But the countless slashers that JONES sets his story upon are just that, a base on which to build, and the real meat of the matter isn’t this or that film. It’s what rests above it all: the TV, the screen of which is finally coming into focus.

From that opening scream and the ensuing gurgle, we thought we’d missed the beginning, but that was just a coming attraction and now the main event is about to begin. We turn to JONES in time to see him slip the rubber MICHAEL JACKSON mask over his face, holding a finger to MJ’s too-red lips and pointing to the screen. The POV back-turns just in time to catch the title;

THE LAST FINAL GIRL, writ big and bold and, of course, bloody. CUT TO:

A dark forest. A BEAUTIFUL TEENAGE GIRL staggers into the shot, because of course she does, covered in the blood of her friends and screaming for help. A moment later, the KILLER stalks up after her, VOORHEES-style, because of course he does. CUT TO:

The edge of a cliff, the showdown between this FINAL GIRL and the KILLER, except two things are really creeping us out right now. One is that there’s a goddamn HORSE somehow involved in the melee and the other, the really disquieting thing, is that now that the camera is in tight on the action, we can see that the KILLER is wearing that same MICHAEL JACKSON mask JONES just put on. We’re practically begging the POV SHOT to pan away from the screen, to see what JONES is up, but it’s too late. Somewhere in there was a subtle shift from the POV watching a TV to being in the TV itself – we’re a part of this now, like it or not. CUT TO:

Perhaps the smartest send-up of slashers ever, a brainier, brawnier, literary SCREAM; the ROSENCRANTZ AND GUILDENSTERN of the genre, complete with inside jokes stashed in every margin, every direction. CUT TO:

Familiar scenes redubbed, the picture manipulated, outright reshot where necessary, until even the stalest tropes in the horror cupboard seem fresh and delicious. CUT TO:

An homage, a parody, a paean, a love letter. CUT TO:

A champion at the height of a defining game; a director helming their masterpiece; a B-movie ham in the role of a lifetime; a brilliant writer writing about what he loves most, maybe, in all the world, and making you love it, too. CUT TO:

THE LAST FINAL GIRL, the greatest slasher movie never made. Yet.