Great music transcends time. We are still moved by the compositions of Beethoven, Bach and countless others today. Why, then, 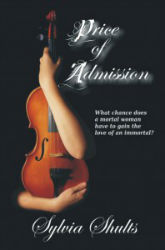 cannot the musicians themselves transcend time? And, once they have transcended time, I suppose they might as well be able to find love. That, at least, is what Max gets up to.

Jessica arrives at an amusement park with her boyfriend and is struck by the presence of Max, the lead guitarist in the cover band that’s playing. She and her boyfriend then enter a haunted house, which transports her back in time to the 1920s. There she meets Max again. Jessica goes home with him. He proceeds to spend the novel’s middle giving us his life story, beginning with his mortal youth in early 18th-century Russia. That concluded, we sit about in the 1920s for a bit, there is some great sex, and then Jessica starts to think about going home.

Despite all of the happenings within it, Price of Admission is a book without conflict. None of the characters are striving for anything. For the most part, they sit about and listen to music or talk about not much. When they realize they want something, it’s given to them mere pages later and never as a result of their own efforts. Max wants to be a musician, but is not allowed to? Poof! Magic talisman! Jessica is lost in the 1920s? No worries: Max is crossing the street just over there. Now, Jessica wants to go home? Well, I’m sure there was at least one German physicist with a passion for the violin that could get her back in a jiffy….

Many of the book’s scenes fall apart under scrutiny and key plot points aren’t exempt from this. Let’s look at Jessica and Max’s first meeting. As I mentioned previously, he is playing lead guitar at the time. Jessica’s “heart skips a beat” (p. 12). Their eyes meet. At this point, he gets off the stage and walks towards her. We are told that he is “still playing” (p. 13), but I’m going to have to admit to some confusion about how one can play guitar while walking through a crowd and away from the amplifier that the guitar is presumably plugged into. Then he calmly says, “Hi. I’m Max,” (p. 13) somehow managing to hold a conversation despite the whole concert going on around him. To end it all on a high note, Jessica then remembers that she has a boyfriend, so, instead of giving Max her name and number, she decides to imitate a chicken: “Call me chicken. Buck-buck!” (p. 14)

Still, Shults does write with passion. Her descriptions of music convey her deep affection for the art form and show a respectable level of technical skill. Every once in a while, she even seems very much in on the joke of the novel’s silliness. Amidst Max’s rapturous descriptions of a concert, we get the admirably cheeky tidbit that one musician plays as if she had “swallowed a violin” (p. 60). These pokes at the premise can be surprisingly endearing. After travelling back in time, Jessica wonders if she can beg sanctuary from her grandparents. But then she realizes that won’t work: “She’d have to find her great-grandparents. Her grandmother would’ve been only ten years old in 1927” (p. 23).

Despite its occasional passion and fun, Price of Admission was too tensionless and perpetually out of left field for me to enjoy. Music may be able to transcend time. Maybe even Max can do it. But I rather doubt that this book will.

You can buy The Price of Admission from Amazon or directly from the publisher.