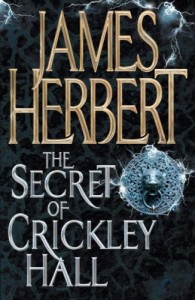 Turn the lights down low. Light the fire. Huddle close. The night is about to get very dark.

It took five years, but we’ve finally got a North American release of The Secret of Crickley Hall. And it’s a straight port of the text, with no localization, to boot (Yes, the shifting usages of U.S. and UK terms – the almost magical transformation of “flashlight” to the proper “torch” in the last act is my favourite – exist in the UK version, too). And for those who couldn’t get their hands on the Macmillan (UK) edition, it was, as Herbert’s work always is, worth the wait.

Crickley Hall is deeply rooted in the British gothic tradition of storytelling: A bereaved family recovering from the loss of a missing, possibly dead, child who vanished without a trace almost a year prior, comes to a house with a dark history that hangs over the local town like a sepulchral pall. The family’s pain resonates with the residual horrors of a house (Crickley Hall) where the deaths of eleven children still haunt local memory. Officially, the floodwaters claimed them, but there are buried secrets here that threaten to rise up and overflow their leveed borders, much like the rivers swelling to bursting with the weight of a gathering storm, as all the terrible secrets within the house wake, reaching out for the living – some in desperation, others in lingering hate and madness.

It’s quite a full novel and its gothic approach to its central ghost story pivot actually reminds me of a form that found a welcome home in American cinema, which may well be why Crickley Hall, for me at least, resonates so deeply with three American films: The Uninvited (1944 – not the 2009 film of the same name, which is a remake of the 2003 Korean film, A Tale of Two Sisters [Janghwa, Hongryeon]), The Changeling (1980 – brilliantly terrifying, in spite of Trish Van Devere’s “performance”, which is a whole other kind of terrifying), and Ghost Story (1981 – not as well done as the Peter Straub novel on which it’s based, true, but the film still creates an underlying sense of entirely palpable menace).

Tension is a double-edged sword, but the keenness of its blade must be applied very carefully. Herbert, thankfully, as an extremely masterful and clever writer, knows how to build progressive and sustained tension. His measured, deceptively relaxed approach to horror is what makes his work so effective – though it can, in his longer works, seemingly weigh down his narrative, as is the case in Crickley Hall, where the second act (middle two hundred pages…) does not so much ostensibly create tension as act as sustained plot exposition, coming very close to being an outright infodump, which, in a horror novel, is an act of suicide.

However, that teased-out pacing has a purpose, and an effective one. In addition to filling us in on the backgrounds of the characters, the titular haunted house, and the conflicts of the characters driving the story (both living and deceased), the molasses pace of the middle act of Herbert’s novel creates, by the very act of denying us breakneck pacing, a sense of underlying urgency. We can feel the awful and foreboding shadow of what’s coming, and it nettles us right at the base of the spine – an antipodal shunt, if you will – that we’re not getting there fast enough, that we are being forced to share the protagonists’ progression through the story.

It’s tied to that part of us that wants to peek, with tremulous fingers peeling back freshly printed pages, at the back of the book to see that everything is, in fact, going to be fine – that somehow, the stars will come right, that the storm will pass and the world will be right and well, again. But this is horror. Those stars herald the coming of the Old Ones; the storm is not going to pass; and the world will never be the same.

You see, by this point, Herbert has us hooked (Actually, this happened on the first page; we just didn`t notice) and – like a fish that’s taken the bait, but can’t yet feel the bite of the hook digging into its palate – we’re caught. And Herbert, skilful writer that he is, reels us in ever-so-slowly.

Ultimately, it’s all about timing – or pacing, if you prefer. With a longer work, you have to pace out information extremely carefully and the structuring of successive scenes takes a different kind of rigour than the composition of a shorter work. You can’t rush the material. For lack of a better metaphor, short stories are quickies, whereas novels are a lot of foreplay.

Also, horror is different in the way it explores a story than, say, fantasy or science fiction. Take fantasy as an example. A work of fantasy is a complex or detailed series of story branches or plot arcs that tie together in a weave of interconnections – each point eventually circling back to serve the main narrative, no matter how disparate those threads may initially seem.

By contrast, a work of horror is an examination of the events or circumstances that feed the plot itself, not always rooted in the progression of events as much as in the culmination of events (though this technique can prove extremely effective in fantasy and science fiction, as well, it’s just not the way those genres typically work, not on a commercial level, anyway).

Think of it this way: A horror narrative is far more like a river than a skein – everything in the story is carried along by the underlying current (usually one of dread) until those elements end up dashed on the rocks that border the mouth of the wide, roiling sea, or are conversely carried out to sea, there to disappear beneath the icy, trackless depths.

And Herbert’s novel does come to a head. Oh, my, yes. Like all good horror novels, its elements come together in ruinous fusion informed by the terror – arising from both the supernatural and more material horrors – that we feel for the protagonists.

It’s a credit to Herbert’s mastery of language and pacing that we are willing to wander with him through a 600-page narrative. Most writers have a tendency to get a little lost during the course of a work that long (Pick a random epic fantasy and try arguing that point), but Herbert’s deliciously deceptive ‘pacing drop’ in the middle act only serves to heighten the tension, once things start coming together fast and furious in the final act.

But does the novel ultimately satisfy? Well, Herbert gives you everything you need to figure out the story’s resolution in the first hundred or so pages, drops enough hints (They used to call this “foreshadowing”) to let you guess every twist between 50 and 500 pages in advance, and yet, still manages to deliver a powerful, if on-rails, conclusion. But really, if you’re already a fan of the genre, or of Herbert in particular, you know exactly what you’re in for long before you ever open the book.

So, yes, the novel definitely satisfies, and in some ways, Crickley Hall, with its rigorous nod to classic gothic horror/suspense structure, is a perfect entry point for someone who’s never really read horror before. And maybe therein lies the true strength of this novel. Rather than bowing to a more modern, more niche, genre of horror, and by instead embracing the highly accessible gothic mode of storytelling, Crickley Hall becomes a gateway for those who’ve yet to try horror. And that, my friends, is quite an accomplishment for a 600-page gothic ghost story, told in the classic tradition.

Bio: Spinner of lies and fictions, weaver of tales, Michael Matheson is a native of the frigid North, where the shadows fall in tandem with the drifting snows of the Canadian wilds, and trackless paths hunger for the unwary. His website (A Dark and Terrible Beauty) can be found at michaelmatheson.wordpress.com.