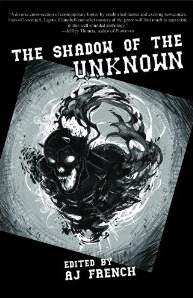 There’s no shortage of Lovecraftian anthologies on the market these days. (They may not quite outnumber zombie-themed anthologies, but, then again, who can keep track?) So, any new one that does arrive has the job right away of trying to distinguish itself from the eldritch pack. Many take the route of some more specific sub-theme, or of mixing Lovecraftian elements and some other motif, such as Innsmouth Free Press’s own Historical Lovecraft and Future Lovecraft. A. J. French’s The Shadow of the Unknown takes a somewhat different tack, choosing instead to focus on “the element of the unknown in supernatural fiction.” As anyone who’s familiar with my own work or my pontificating on the subject can probably surmise, that’s a goal that I find commendable, and one that’s near and dear to my own heart.

The difference between Shadow of the Unknown and the next Lovecraftian anthology on the shelf is pretty obvious, even from the striking black-and-white cover, where there’s nary a tentacle to be found. There aren’t many in the pages of the book, either, and to those for whom “Lovecraft” is generally synonymous with “Mythos,” Shadow of the Unknown may appear to be pretty thin when it comes to references to Cthulhu or the Necronomicon.

Instead, Mr. French and his authors seem to have been more interested in other themes and preoccupations in Lovecraft’s work, notably: uncertainty, madness and doom. The stories in Shadow of the Unknown abound with unreliable narrators who stumble, sometimes unwittingly and sometimes by their own machinations, into mind-shattering realizations and terrible fates. Sometimes, these realizations and fates are familiarly Lovecraftian, other times strangely pedestrian, and sometimes, they’re something else entirely.

As for the stories themselves, they’re a mixed bag, in style and quality, as well as in tone and subject, and some succeed better at capturing the “element of the unknown” than others. While it seems unlikely that many readers would find the contents to be entirely to their taste, I also think that most anyone who finds the premise of the book interesting will find at least a few stories to like here. Among my favorites, the wonderfully decadent and almost surreal “Blumenkrank” by Erik T. Johnson deserves special mention.

While ultimately, The Shadow of the Unknown may have a reach that exceeds its grasp, its premise provides an intriguing focus for a Lovecraftian collection and it proves to have a few real gems within its pages.

You can buy The Shadow of the Unknown on Amazon.com.