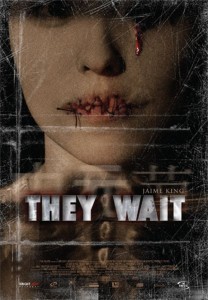 and their young son Sam (Regan Ooey) to attend a family funeral. They arrive during the seventh month of the Chinese calendar, considered to be bad luck in Chinese Buddhist culture (Today, the Hungry Ghost Festival, is the most important day of that month), when the vengeful dead are able to return to touch and affect the living. Sam sees people who appear and disappear and take strange shapes. His mother also sees odd things, like a massive head wound in the bathroom mirror that vanishes seconds later. Jason thinks his son is just fantasizing. Jason’s domineering Aunt Mei and colourless two uncles are cold and secretive. When Sam appears to acquire what look like long, black gloves on his arms and collapses in her arms, Sarah is forced to delve into Chinese culture and her inlaws’ ugly sweatshop past to save her son. But it’s a dangerous journey that could get her killed and her worst enemies may not be the dead but the living.

Filmed in Vancouver and set in a west coast Chinatown, They Wait is a solid Canadian indie horror with a fair bit of creep and original horror mythology, not to mention a nasty twist ending that feels organic to the story (Listen carefully for that whimper at the very end). It explores, not only ghosts, but general Asian folklore in a way that goes beyond the usual Ringu rip-offs of creepy, little girls with parental issues. It also delves into the troubled history of Chinese immigrants in North America, cross-cultural issues, interracial marriage, the illegal trade in bear parts, and the old Chinese immigrant belief that one’s bones must be returned to China and buried there, or one’s spirit will never rest. The supernatural and flashback scenes dealing with the backstory of the ghosts, their powers and their revenge are original and frightening, easily the best parts of the film.

Unfortunately, the script turns timid in its characters, which are nothing you haven’t seen a thousand times before in horror films. It’s just that some of them are Chinese. You have the hysterical and credulous mother, who is right about the evil, but not listened to; the cute and vulnerable child; the clueless husband/dad; the evil inlaws; useless doctors and nurses; bewildered or inscrutable helper figures; and so on. Sarah spends so much time having conniption fits that there’s little build-up to the terror and helplessness she experiences when Sam falls into a coma. The writing doesn’t exactly lend itself to King’s talents, which run more to action scenes (as in My Bloody Valentine 3D, where she credibly fought off the Miner) than emotional subtext. The excellent Terry Chen, a Da Vinci’s Inquest veteran, gets little to do as Jason, who spends most of the film in denial about his own cultural heritage. Fortunately, Chen also gets to play several ghosts and demons, appearing as such in two of the creepiest scenes, one in a Chinese shop and one near the climax. Ooey is a pretty decent little child actor, but Sam’s only there to be cute and get rescued. And though Pei-Pei Cheng ably navigates Aunt Mei’s necessary transition from cold defiance to stark fear near the end, she’s not given much to do, either, aside from glower for a lot of the film.

The acting, including King’s, is not my problem with They Wait. The actors all do their jobs as well as the script allows. But some of the things the story has them do…oy. On the one hand, I applaud the film giving us a sympathetic interracial couple and I understand why They Wait, which is intended for a Western audience, uses King’s white-mother character as a way to introduce the necessary Chinese culture and historical background to viewers largely unfamiliar with it. The story is a form of the Gothic romance, where the heroine finds herself plunged into an unfamiliar situation where everyone else knows more than she does. However, it eventually becomes a case of the White Protagonist Saves the Day Against Inscrutable And Treacherous Asian Inlaws. I kept thinking that this should be Jason’s story not Sarah’s. It’s his family curse not hers.

Worse, Sarah, her husband and her son just came back from China after several years. So, why is she so ignorant of Chinese culture? Furthermore, why are her husband and inlaws so cavalier about their own cultural traditions that she has to almost “teach” her husband, especially, what to do to save their son, five minutes after meeting some wise old Chinese apothecary (who is, I believe, also a ghost)? Sure, these are superstitions and people have a wide range of skepticism about superstition within a culture. Yes, Jason’s aunt and uncles are in complete denial about their dark past, having literally walled it up. But that doesn’t stop everyone having to act very Dumb on Cue in order to make the (present-day) story move in the right direction.

Still, this is a pretty good example of Canadian horror, moodier and more-culturally-oriented than most American horror. And it’s also an example of why ghost stories can be so compelling. They are our past come back to bloody and literal life. You can tell a lot about a culture from the way it views its dead.

You can buy They Wait on Amazon.com.