Twice the Terror is a Best-of anthology from The Horror Zine. It has a stunning cover of a red-robed, green-faced, stony monk, holding a putrid rose that appears to be turning his fingers black, against a background of a castle in a blood-red sunset – or it could be on fire. Man, I’d like a poster of that. On the back is a Roman plate design with a fiery-eyed medusa head and multiple species of snakes for her hair. Quite the entrance, you might say.

The book contains quite a lot of material in a variety of media – fiction, poetry, and illustrations – put together into a very professional and well-edited product. Twice the Terror won’t be falling apart on you any time soon. The fiction itself, though well-written, I found a little on the stale side. Lots of stock characters (the abusive father, the bitchy trophy wife, the evil corporate suit) in too many stories; more gore than supernatural scares, with a few too many serial killers; and most of the settings were not exactly unusual. Plus, there were a few stories that were essentially science fiction with a slightly supernatural bent but not very scary or horrific. The illustrations also had a fair number of naked females in them for no apparent reason. Not unusual for horror fiction art. Not really living up to the promise of that front and back cover, either.

But there’s still enough good stuff in here to warrant a buy. The inclusion of poetry and art broadens the subject matter and styles. And what is striking is very striking. In fiction, I especially liked Jonathan Grey Chapman’s “We Zombies”, which went back to the old-style voodoo zombies while also somehow evoking the pathos of Romero’s original Night of the Living Dead. “Bottom Feeder” by Deborah LeBlanc reads initially like a rip-off of The Texas Chainsaw Massacre (Or one of those AfterDark Festival flicks), but ends up evoking sources from The Odyssey to Buffy the Vampire Slayer to Canadian serial killer, Robert Pickton’s, notorious pig farm. No mean feat. And Jeani Rector’s “Under the House” has one hell of a twist. Even though you can see it coming, that doesn’t make it any less a kick to the head when it arrives. Also, Bentley Little’s “The Security System” would have made a very disquieting Tales from the Darkside episode.

Stand-outs in the art are Jason Beam’s portrait of Vincent Price in the preface section, Beth Robinson’s screaming puppets, Larkin’s 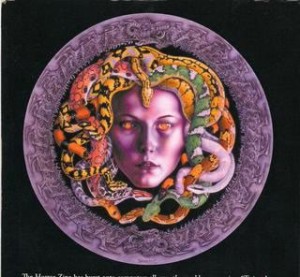 spider-eyed woman (Larkin also did the back cover), and Riann Marais’ noncommittal wooden door off a cliff. For some reason, that last one always creeps me out the most.

In the poetry, Jane Blue mixes evocative imagery about graveyard corpses in “Sonnet” with Dexter-ish fatalism in “Forensic Pathologist”. Gary William Crawford makes even the most benign kirkyard sound like a Lovecraftian bastion of centuries-old menace and decay in “The Ruined Church”. Holly Day’s “Chicken Woman” contrasts the night and day jobs of a female practitioner of voodoo. Richard Hill gives us the POV of the hapless son in that climactic moment from “The Monkey’s Paw”. Alec B. Kawalczyk is feeling just a wee bit paranoid about police chalk lines of bodies on the sidewalk in “Transfer of Guilt” and drowns a town in a reservoir in “Sinker”. And John Marshall draws a sensory-rich word portrait of the eponymous holiday in “Hallows”.

All in all, it’s a good anthology to sink your teeth into and there’s a lot here to read. Plus, those covers are really nice.

You can find Twice the Terror: The Horror Zine, Vol. 2 on Amazon.com.