If you can’t tell by the title of the anthology, Undead & Unbound: Unexpected Tales From Beyond the Grave is full of stories that feature the undead in all their possible permutations. 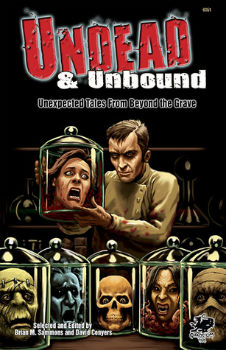 In fact, one thing this reviewer grew to appreciate was the distinct thread of dark humor throughout the anthology. That’s not to say there wasn’t some straight-ahead horror and fear (and occasional missteps into pathos), but there were also a few times I laughed aloud while reading. (Thankfully, it was because the stories were intentionally funny and I was supposed to laugh.)

Let us take as our benchmark “Undead Night of the Un-Deadest Undead” by C.J. Henderson. I hope the name conjures for you the delightful monster-mash kookiness contained therein.

As for more serious fare, I’ve got to take a moment to extol to the skies “In the House of Millions of Years” by John Goodrich. Now THAT, kids, is how you handle mummies. There is an understated monstrousness to his style that reminds me of Gene Wolfe. So, yeah, I like.

One of the things I appreciated was the variety of undead creatures. Sure, you have your zombies – excellently handled in “A Personal Apocalypse” by Mercedes M. Yardley, whose endearing, cutlery-selling door-to-door zombies end up packing a serious emotional punch – and your vampires (with a crotch-grabbing twisty-twist in Glynn Owen Barrass’ unapologetically-named “Phallus Incarnate), and your furious skeletal conquistadors courtesy of William Meikle’s deeply human “Descanse En Paz.”

But there were also critters like undead faeries, Lovecraftian demon tentacles, and the fit-for-bizarro monster called a “Penanggalan” in “Mother Blood” by Scott David Aniolowski. (No, you should not go on Wikipedia; read the story first.)

The only weakness was in the perceived unevenness of the anthology. Perhaps, in trying to cover all the angles without too much monster repetition, the editors, Brian M. Sammons and David Conyers, ended up with a handful of stories that felt overdone and didn’t resonate with this reviewer. But that’s endemic to every anthology, so I’ll chalk some of that up to personal taste.

To summarize: While there was an unevenness to the anthology, the stories that were good were super-duper shining stars. Get thee to a bookstore and see for yourself.

You can buy Undead & Unbound: Unexpected Tales From Beyond the Grave from Amazon.com.

Bio: Mason Ian Bundschuh is an award-winning author, musician and troublemaker raised in Hawaii, educated in England, and currently haunting Las Vegas. He once punched a shark and plays the banjo. His work has appeared in Crossed Genres Magazine, Chiral Mad 2, Las Vegas Citylife Magazine, Historical Lovecraft (Innsmouth Free Press), Wily Writers, and Shock Totem Magazine, to name a few. His sci-fi horror novella, Piercing the Veil, comes out in Spring 2014 from Samhain Publishing. You can find him at www.MasonBundschuh.com.