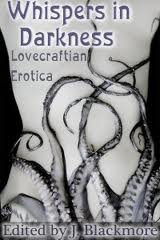 Yes, there are tentacles here, so let’s just get that out of the way right now. But it’s not all tentacles.

But I do know that most of these stories, and their polymorphous blobs, gods, ghouls, and, yes, tentacles – lots of tentacles – succeed in the goal of Circlet Press books: poking, prodding, stroking, and provoking your brain’s pleasure centers. They’re a literary cross-wiring of your brain’s sex centers with your sense-of-wonder forebrain, with some intermittent short-circuits with your “what the …?!” centres. Of course, I can only report my results. The circuits in your skull may produce different results.

Note that the subtitle is “Lovecraftian Erotica”, not “Lovecraftian Horror”. With the exception of two, none of these stories really has any horrific elements in it – and one of those stories fails at the sex.

Still, the writers took their writ fairly seriously, didn’t go for jokey stories, and usually use Lovecraftian imagery, often coming up with direct prequels and sequels to specific Lovecraft tales.

So, let’s take a look at the eight stories.

Emotional explication and logic get sacrificed for sex in Bernie Mojzes’ “Ink”. A private eye meets Eldritch Horror, a veritable orgy in a cheap suit, who hangs out in a local bar and knows something about a missing girl the detective is looking for. Why a shoggoth-like creature is allowed to hang out, relatively unremarked upon, in a bar is never explained, because this story isn’t interested in reality at that level but in what Eldritch Horror sells, for a high price, to local college kids in a backroom of the bar. But, if the story’s imagery is Lovecraftian, the theme of the alien providing an irresistible lure to self-annihilation reminded me of something Lovecraft’s friend, Clark Ashton Smith, might have produced if he had explicitly written erotica.

“Koenigsberg’s Model” from Peter Tupper is another monster lover story. (This anthology is lean on stock Homo sapiens coupling with each other.) A Miskatonic University student doing a thesis on the primal attractions of pornography – beyond the obvious ones – comes across the sketchbook of a famous comic book artist. Soon, his slightly atypical attraction for the bookstore owner who shows him the book – she’s black, he’s white – becomes something a whole lot more outré. This one, with its look at the career of the artist Koenigsberg and his odd drawings, is actually more interesting in its non-sex parts, though it wobbles a bit in the logic of its ambitious plot.

Of all the times in this book I was unnecessarily assured, by a phrase or bit of foreshadowing in the beginning, that those “good parts” were on the way, I found “The Dreams in the Laundromat” by Elizabeth Reeve least annoying in that respect. That was probably because the tone and characters were like something out of Penthouse Forum: “There was this really cute guy in my lit class, Lars. I sooo wanted to talk to him, and then one day he told me he was having a lot of trouble sleeping and thought it might have something to do with this math student who used to live where the laundromat is now except like in the 1920s or something. Anyway, he asked me for help researching this Walter Gilman guy, so we went up to his apartment and, well, things kind of took off. You will sooo not believe what was under his shirt!” Those are my words. Reeve uses a lot more. Still, goofy, sexy fun with two students from Misk U.

In some ways, I liked Angela Caperton’s “Sheik” the best of any story in the book. Or, at least, I wanted to. Its setting – Hollywood in 1922 – and protagonist – a young starlet about to be in her first starring role – promised something a little different. And things definitely got more interesting when her co-star, Ahmed Bey AKA stage magician Nyarlathotep the Great, is introduced. But things ended anticlimactically – at least in a literary way, in the coda that went nowhere.

You can buy Whispers in Darkness: Lovecraftian Erotica at Amazon.com.