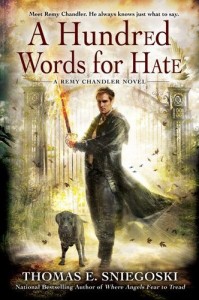 The caretaker of the Garden of Eden is dying, and something evil festers and grows beneath her fertile soil (Yes, her, the Garden is sentient). Meanwhile, Bostonian PI Remy Chandler’s latest case involves an elderly African-American woman suffering from Alzheimer’s (and an even older angel, Malachi). Fernita can’t quite remember what she hired Remy to do, but it’s connected to the Garden and an old angelic friend of Remy – Francis, a former Guardian of Hell. Remy, a recent widower, is being pushed by his best human friend, Detective Mulvehill, to reconnect with his humanity by getting into a new romantic relationship. Since Remy’s humanity is a fragile shell (or is it?) covering his true identity as a seraph who deserted to earth after fighting on the winning side in the War of Heaven, Mulvehill is right to be concerned. But Remy’s new case may level his entire life as a human and kill (or alienate) those humans with whom he’s created a connection.

Strictly speaking, I suppose A Hundred Words for Hate doesn’t quite fit into the category of paranormal romance. It’s called “hardboiled noir fantasy” on the back cover and could also be called “urban fantasy”. Less Sookie Stackhouse. More Harry Dresden. Though there are three major couples (four, really) in the story, this is not romance. The genre focus lies elsewhere (In fact, the monster in this one perhaps has even more connections to Mythos than the one in the last book, Where Angels Fear to Tread). And yet, in a way, the story is all about Love, in both the romantic and more universal sense. Remy’s universe has a lot of sad and dark corners, but even the ones in Hell are illuminated by the connections that people (human and angelic) make with each other.

Sniegoski does a surprisingly good job of making the stakes seem high, and the consequences of failure catastrophic, in each book. Which is pretty good, considering the first novel, A Kiss Before the Apocalypse, threatened the end of the world and killed off Remy’s human true love. He has been working his way slowly through various eschatological ideas and biblical figures as he’s gone along (A Hundred Words for Hate is the fourth novel in the Remy Chandler series and Sniegoski has also written a YA series in the same bookverse called “The Fallen“). We’ve seen Remy fight a variety of foes, most of them angelic and some of them quite deadly.

But his worst crises are internal. His Inner Angel, the Seraph Remiel, which he believes to be his true identity, approaches every problem with total ferocity, leaving scorched earth in his wake. Remy fears him in a way he fears no external monster. And yet, “Remy” appears to be only a human persona, carefully constructed in order for this fallen angel to interact safely with humans and go about a quiet life on earth. So, who, exactly is driving the bus? This question has life-threatening consequences when Remy confronts the Big Bad of the story and it turns out the seraph is not strong enough for the task…but the human might be.

In a somewhat-less-psychologically-fractured fashion (though with no less pain and confusion), Remy’s old heavenly buddy, Francis, is going through an identity crisis of his own. We get a lot of flashbacks to his tenure as Guardian of Hell and how he fell (and fell in love). Having originally rebelled along with Lucifer (and later repented), Francis is understandably less connected to humanity than Remy, but he’s getting there. Though he seems to be taking a mighty big detour via working for someone he has no business working for, and falling into the clutches of a deadly foe.

Sniegoski’s portrayal of Heaven and its angelic inhabitants comes across a lot like a religious cult, with the fallen angels being tortured in Hell then allowed back to earth on parole, only to (usually) fall prey to human vices and sink further into damnation. But this time out, the story hints that maybe there is more to the process than punishment. We have seen both Remy and Francis grow more powerful in their angelic selves over the course of the series. But so have their human sides, with their angelic powers being shown as extremely dangerous and difficult to control. Sniegoski seems to be saying that these angels are growing souls and that all fallen angels, given enough time, will also do this, eventually finding redemption. He also implies that souls are good things to have and that it’s a good thing to be human (something that Supernatural needs to work on). Humans even have some secrets and surprises of their own, and are not nearly as helpless as the angels think they are.

All this is not to say that the Big Bad is incidental or underwhelming. In fact, the Big Bad for A Hundred Words for Hate is pretty freakin’ scary and – as I said before – decidedly Lovecraftian in its implacable, protean, angel-killing rage and hunger. But you don’t meet it right away.

I find myself enjoying this series more as I go along (including when I go back to read the older books). Probably that’s because I like to get into characters and their world and Sniegoski finds a new corner to explore each time. Also, the characters grow from book to book, as do their situations. It helps that Sniegoski likes to hunt the snark. I’m looking forward to the next one.

You can preorder (at a discount) A Hundred Words for Hate from Amazon.com in both print and Kindle.