Mean Streets has one big goal – to get you to read the series of at least one of the authors inside. It consists of four 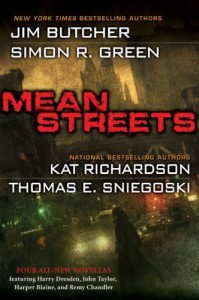 paranormal noir novellas by Jim Butcher (The Dresden Files), Simon R. Green (The Nightside series), Kat Richardson (The Greywalker series), and Thomas E. Sniegoski (The Remy Chandler series). As with Unusual Suspects, this is a teaser anthology…or, if you’re really into the series protagonists found herein, a volume for completists.

In “The Warrior”, cynical Chicago wizard Harry Dresden gets involved in a case that goes personal when his friend Michael, a former Knight of the Cross, and Michael’s family end up in danger from an unknown source. The mystery involves a magical sword and enemies in strange places. And it could get Harry killed several times over…or teach him a lesson about his own true worth in the world. Harry’s a fun character, somewhat different from the TV version (which I enjoyed before Sci-Fi unceremoniously pulled the plug on it), more Sam Spade than the TV’s Philip Marlowe. He has no illusions that his life is worth as much as a rare and powerful sword, but it’s nice to see him proved a little wrong in the end.

John Taylor in “The Difference a Day Makes” probably wishes he could have such a clean resolution to his case, but that’s not the way London’s sinister Nightside works. And it’s especially not that way when Taylor, with the help of his undead buddy, aptly-named ‘Dead Boy’, accepts the case of a woman who’s lost a day of her life somewhere in the Nightside. Some things, as both Taylor and his client discover, are better left lost than found (The climax is kinda creepy and almost Lovecraftian in a cyberpunk sort of way). Taylor is no more or less hardboiled than Dresden, but his Nightside is a good bit grimmer than Dresden’s sorcerous Chicago.

“The Third Death of the Little Clay Dog” by Kat Richardson has a lighter touch, a female protagonist this time, and a fish-out-of-water plot. Unlike Dresden and Taylor, Harper Blaine is forced to leave her hometown of Los Angeles and go to Mexico on the Day of the Dead to fulfill a client’s request. Being a “greywalker” (someone who can see and interact with the spirit world), Blaine knows that visiting a graveyard during such a dangerous time isn’t such a hot idea. But not being up on her Mexican culture, she has no idea just how ugly it can get – at first. This is a mostly light-hearted jaunt with a nice bit of karmic revenge for the invisible title character at the end.

Finally, “Noah’s Orphans” reintroduces us to Sniegoski’s angelic Bostonian PI, Remy Chandler. This was the story I bought the book for (though I was curious about the Dresdenverse and Unusual Suspects got me interested in Green’s Nightside stories) and it doesn’t disappoint. It’s a lot like the books in the series, though the mystery, of course, is somewhat less convoluted than usual. Remy investigates the death of a biblical figure, Noah (Yes, that Noah) in the present day. Turns out it’s a murder and the killer has a very twisted agenda concerning some creatures that didn’t make it onto the Ark. If you’ve read any of the books in the series, you’ll know the plot always involves a fair bit of angelology (though some of Remy’s old heavenly comrades make Supernatural‘s feathery clan look downright cute and huggable, and I don’t just mean the fallen ones). If you haven’t, you’re in for a treat. There’s an especially touching and unexpected resolution involving Remiel, Remy’s Inner Angel, who is not normally what you’d call “touchy-feely”. Whenever he comes out to play, things burn. But his paternal feelings are roused in this one from an unexpected quarter.

So, as I said, it’s a teaser book, meant to give you a taste of four popular series put out by the same publisher. They’re all paranormal mystery, but all a little different, with different styles, and different types of private eyes with different backgrounds and skills (even different species). If you’re into the subgenre, you should be able to find one to your liking…if you haven’t, already. If you’re buying them because you’re into one of the series, the book is also worth it. All the stories are competent and well-written, with the elements you expect for each series (Well…I’m guessing a bit with Richardson’s, since I’m not familiar with that series, but it’s true of the others). You’ll get the series fix you’re looking for here.

You can buy Mean Streets at Amazon.com.