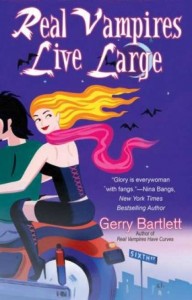 Gloriana St. Clair is a relatively young vampire, having been turned (willingly) in 1604. She owns a boutique that gets burned down early in the book. She also has an on/off boyfriend named “Blade”, a dog/shapeshifter/bodyguard named “Valdez”, a larger Scooby Gang than Buffy the Vampire Slayer’s, and even more enemies. Her biggest two problems seem to be that she is perpetually “curvacious” and that she has built up a load of vampire power over the centuries (Hmm, who knew eternally PMSing could have value?). The latter quality makes her the target of “Energy Vampires”, who like to steal other vampires’ powers and use or sell them.

As it’s the second book in the Glory St. Clair series (There are six so far, the first being Real Vampires Have Curves), you’d think you’d have a hard time getting into the storyline of Real Vampires Live Large, but Glory’s background is helpfully infodumped in the first couple of chapters. With this kind of book, that’s not really a criticism. Like the chicklit bestselling Shopaholic series, this is one that you can enter at any point. While there is some progression in plot from book to book, each one can stand alone. The draws are the main character and her world.

Real Vampires Live Large doesn’t exactly leap out of the pack in terms of originality. These are fairly standard vampires of the “sexy”, paranormal romance variety: unable to go out into the sun, but also hot, sexy, perpetually young, and pretty benign for the most part. They can glamour ordinary humans and can feed without killing their victims, even healing them afterward. Many of them can also shapeshift. And there is the now-standard paranormal motif of rival vampire groups and hot, brooding vampire men.

On the chicklit side of the genre fusion, Glory tells her rather meandering tale from a snarky first-person POV. She has a “female” profession and obsesses about clothes and her weight (though she does rescue herself, and everybody else, in the end, which is nice to see) a bit more than the mystery of why her shop burned down. She’s blonde and blue-eyed and practically every man who comes in contact with her obsesses over her. One could say the last bit, especially, is cliched to the point of Mary-Sueness, but of course, the twist is supposed to be that she’s a fat chick who is still irresistible to men (though in pre-20th century terms, fat in a woman was a turn-on not a turn-off in most cultures, because it signaled wealth and power). Sadly, Bartlett doesn’t really do much with this fantasy aside from having Glory mention her “curves” from time to time. Even more annoying (and, granted, probably outside the author’s control), all of the books actually have slender women on the cover, which seems hypocritical and short-sighted. I mean, if this book is aimed at “normal”-sized women, why not have a normal-sized woman on the cover?

Still, this kind of melding of chicklit and paranormal romance is intended to be fun not deep literature (even allowing for the plus-sized angle), and there, I think Real Vampires Live Large succeeds. Glory has a strong, singular voice and doesn’t let her weight issues cut into her self-confidence (thus reinforcing the romantic fantasy about her being a “real”-sized woman). She has plenty of lovers and friends, to whom she shows a lot of loyalty and affection, and gets to save the day (even if she does dither quite a bit before then). Also, some of the sex scenes (Yes, they’re fairly explicit) give new meaning to the phrase “long-term relationship” and Blade is a decent guy, rather than Tall Dark and Jerky. If you’re going into this series looking for a good time with a snarkier and less-inane version of Twilight, you won’t be disappointed.

You can find Real Vampires Live Large on Amazon.com in print and on Kindle.