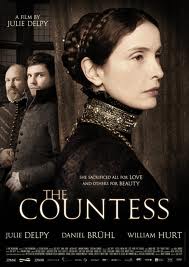 Erzsébet (or Elizabeth to English-speakers) Báthory is a character whose life has been coloured more by fiction and speculation than fact. I once read a book which said she’d been bitten by a vampire and took this concept quite seriously. The book was not intended as fiction. It has been hard, thus, for an accurate picture of Elizabeth to pierce the veil of time and few people have attempted to do so because the sensational version sells more books and films than the more prosaic explanations.

The Countess is a fictionalized historical account of Elizabeth’s life and though it seems closer to a depiction of the real Elizabeth than the other stuff we’ve seen on film (Hammer’s Countess Dracula, some porny version of Elizabeth which I can’t bother to track down right now, and many more), it’s still a flawed product which ultimately can’t decide what it is. It’s also a love story and the reason why I am reviewing it for Shivers and Sighs Week stems from this fact. Also, it serves as a contrast to Dorian Gray, another film I’ve looked at that has a protagonist who is very worried about his looks, the same malady that afflicts the countess Báthory.

The film opens with a brief recap of Elizabeth’s life. Rich, powerful, smart, and beautiful, Elizabeth nevertheless lacks an important element: love. She finds it as a teenager, but her lover is executed by her family when the affair comes to light and Elizabeth weds the rich Ferenc Nádasdy. Then, after a couple of decades, she finds herself a widow and quickly falls head-over-heels in love with a much younger man, István. If this were 2011, Elizabeth would be the equivalent of Demi Moore and simply wed her young, besotted lover. But because this is Hungary 400 years ago, that shall not be the case. István’s father, who hoped to wed Elizabeth himself, is miffed by the situation. He yanks István away and forces him to marry a young woman. Thinking that István does not love her because she is too old for him (due to a forged letter, no less), Elizabeth goes nuts and starts killing young women to bathe in their blood.

Julie Delpy does a good job of playing the main character and directing the film. The costumes are pretty, the period setting looks great and we do believe that Elizabeth and her paramour care for each other. The problem, then, is that the flick wants to have its cake and eat it, too. At the beginning of the movie, we hear a voiceover that explains history is told by the victors and it seems now we’ll get to hear the other side of the tale. For a little while, it seems that this will be the case, that Elizabeth will be able to tell her tale, and then it doesn’t happen. The film shows us that Count Thurzo is setting up Elizabeth, killing people and colluding with the King to have her appear as a murderer, which would indicate she is innocent, but she really isn’t because Elizabeth has been killing women all along. Thus, the subplot of the coup seems unwarranted. It’s as though the movie wants to tell the story of an innocent Elizabeth (which would still be quite a story), but the filmmaker feels obliged to provide us with corpses, dismembered bodies and the like, because this is Elizabeth and those come attached to her. I would have been much more interesting in seeing an innocent Elizabeth, or having a more complex narration, a Rashomon of sorts, with Elizabeth observed from different points of view and varying greatly in the telling.

The movie gives Elizabeth a speech where she complains that when men kill in wars, they become legends. It’s different for women. Although it’s an interesting point, considering the violent times Elizabeth lives in, we don’t spend enough time outside Elizabeth’s castle to see how Hungary operates. Is it a barbaric horror where violence is rewarded? Is Elizabeth merely the product of her environment, as opposed to a lady who needs some Botox? Yes, we get to see some deaths and mayhem and some discussions at the dinner table, but the larger political and cultural context of the times remains hidden. Religion, for example, is never examined, even though it was a big deal (Elizabeth’s family supported the Protestant Reformation, but her uncle, the King of Poland, was Roman Catholic) and probably led to Elizabeth’s downfall.

Thus, what we get is Elizabeth obsessing over wrinkles and age spots, descending into madness, doing atrocious things, while at the same time, the director demands that we view her as a sympathetic figure who was wronged by the mean, anti-women establishment. Um…it doesn’t quite work that way. Though, to be fair, Julie does give it all she’s got. I’m just not one to feel too keen about serial killers, even if some asshole told them they couldn’t marry the love of their life.

In the end, this flawed costume drama aspires to be feminist film, psychological drama, mild horror romp and tragic romance, and it all doesn’t quite turn out right. However, it’s a recommended watch for people who like period films and horror (though this is horror of the mind, not of supernatural creatures).

Elizabeth Báthory is an elusive creature. She still has many film incarnations left. Personally, I think a well-produced miniseries would be the obvious choice to tell her tale. And, if they’re filming The Game of Thrones, I can’t see why they wouldn’t be able to do a historical costume drama based on her. Whether the result would be more Dexter or Dracula than a scholarly account of the infamous lady, I cannot say.

Note: The Countess is available from Netflix and seems harder to come by as a DVD in Canada or the US.