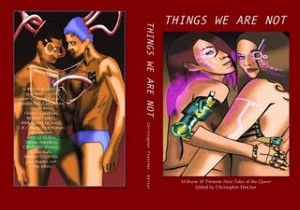 First, I have a confession to make – I promised Chris a while back that I’d review this. I was curious about the subject matter and he needed reviews. Unfortunately, at the time, I was thinking ebook review copies would be an awesome way to get around postal rates and such. Well…after a year of having this and another book on my desktop, I’ve figured out that, for various reasons, I review print books a lot faster. So, mea culpa. Sorry, Chris. I’m doing it now.

For those of you who don’t know about the book, Things We Are Not is an anthology of “queer” science fiction. That is to say – science fiction with gay, lesbian, bisexual, and transsexual characters. Since this is science fiction, some of those characters are also hermaphroditic or switch genders (as in Michael D. Griffiths’ “Transitions”), either freely or inadvertently. Some of them are even machines (Christopher Fletcher’s “The Robbie” and Derek J. Goodman’s “As Wide as the Sky, And Twice As Explosive”). And, of course, we do have an mpreg (male pregnancy) story, too – Lisa Shapter’s “The World In His Throat”. Yay for fanfic’s influence on pro spec-fic.

I actually rather like the trope of gender-bending because it is, by its nature, experimental and some of it can be a lot of fun. It really feeds into the whole idea of trans-or-posthumanism. You can get some perky, optimistic stories about plucky Homo sapiens evolving to the next level…or you can descend into full-blooded body horror. If you’ve never checked out John Varley‘s stuff (not only does he do GLBT and gender-switching, but he also did early cyberpunk before there was such a thing), give it a try. Varley has a light touch, much like Lois McMaster Bujold’s, with hard SF concepts and plays with a lot of ideas.

I thought this anthology would be a good addition to Shivers and Sighs Week because, as Brandon Bell notes in his introduction, a major question of queer lit is the question of sex…whether it’s the central question, and even whether it should be the central question, of sexual identity. So, naturally, you’ve got quite a lot of queer romance in the anthology, though it’s not every story. In some stories (such as Alex Wilson’s “Outgoing”), the protagonist’s biggest problem in life has nothing to do with her (or his) sexual orientation.

I won’t get too much into what didn’t float my boat. The only one which really made me scratch my head was Larissa Gale’s “Diplomatic Relations”, which evoked – a little too much for comfort – those “spaceman cures a frigid (alien) woman with a good shag” first-contact stories of yesteryear that Joanna Russ mercilessly skewered in her classic tale, “When It Changed”. With others (like Mari Kurisato’s cyberpunk “Connected”), I admired the ideas, but wasn’t won over by the execution. This is an eclectic collection and I think each reader will have different favourites and near-misses.

I will say that the first hundred pages didn’t grab me as much as they could have, though I got more interested after that. The first story, “Switch”, by Eden Robins [correction: this is actually Brandon Bell’s “Things We Are Not”], for example, starts off well with a host of ideas about a post-apocalypse of weird, mutagenic plagues that forcibly evolve rather than kill, and have somehow evolved animals (especially birds) to the point where they are taking their first tentative stabs at civilization in the urban wreckage left by mutated-to-madness humans. This story is also explicitly Mythos, with an ending that evokes both Lovecraft and Poe. But the “switch” in POV in the middle of the story is completely confusing and the story never regains its momentum after that. Too bad, because it has a lot of nice ideas, but it’s also got too many ideas and the story never settles down to digest any of them fully.

On the flip side, Stephen Gaskell’s “The Offside Trap” offers a muscular (and rather sad) coming-out story set in Britain, but the one speculative element (the protagonist can slow time) is drowned out by the queer element of the story and never connects with the plot in any real way. More successful is Jay Kozzi’s “Pos-psi-bilities”, where the protagonist’s strange luck lies somewhere in the range of Magic Realism, but still affects the plot in a clear way. Though the story overdoes it on explicit sex scenes (which bring the pace to a screeching halt in the last third), it has a very likeable protag and a compelling Bostonian coming-of-age story. For some reason, I kept picturing Mark Pellegrino as Bruce, though that’s probably because I’ve recently started reviewing Syfy’s remake of Being Human.

My favourite in the anthology is Abby “Merc” Rustad’s pitch-black “Queen for a Day”, in which a young girl wins a lottery and becomes the absolute monarch of the world for a day – but only a day. Kudos to Rustad for managing to evoke the film Sister, My Sister so forcefully, engineer a whole string of betrayals from all quarters, both large and small, and still make the elder sister sympathetic at the end.

I also got a huge kick out of “Confessions of a Call Herm”, a byzantine murder-mystery satire in which the professional point of a love triangle encompassing a super-rich husband and wife tries to solve their murders. And Alex Jeffers evokes considerable heroic fantasy atmosphere in the anthology’s last story, “Composition with Barbarian and Animal”.

I was happy to see that the anthology didn’t linger too much on themes of prejudice and intolerance, though these do figure heavily (in various ways) in the plots for C.B. Calsing’s Mad-Max-style “Seeker” and Therese Arkenberg’s steampunkish “Reila’s Machine”, among others. While gays, lesbians, bisexuals, and transsexuals certainly face a boatload of prejudice, and at least some of the stories needed to address that, science fiction should also be about hope. It should also explore worlds where same-sex love is tolerated, ignored or even celebrated. Having only stories where being queer means being a victim throughout space and time wouldn’t be what you’d call “positive”.

I didn’t see any stories that addressed bisexuality as an identity, though (Deborah Walker’s “The Meerprashi Solution” probably comes the closest), which I found a bit odd. I don’t think gender-switching or hermaphroditism really counts in that respect. But overall, the anthology does manage to cover a lot of bases in terms of sexual identity, while also covering a wide variety of scientific tropes and literary styles. You can find something to like in here, even if you’re not into the general theme of “queer” fiction. It’s science fiction, too. All you need do is keep an open mind.

You can buy Things We Are Not, in both print and Kindle, on Amazon.