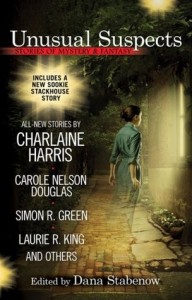 Unusual Suspects is an anthology of paranormal fiction, including 12 stories from various authors, all formed around the theme of a detective investigating a mystery. The mysteries range from murder and treason to lighter misdemeanors (like B&E and theft), the detectives from police to amateurs, and the subgenres from high fantasy through urban fantasy to X-Files-ish paranormal. I was surprised to find out that this was a sequel to another anthology by the same editor, Powers of Detection. Due to similar themes and similarly Gothic-looking covers, I had thought it was a companion piece to yet another anthology, Mean Streets (which we also review this week), but nope, they’re not even by the same publisher. Though they do share one author (Simon R. Green). Go figure.

This is a rather “unusual” anthology in some more significant ways. All of the authors, according to their bios in the back, are well-established heavy-hitters with novels under their belts. I didn’t know all of them, but I knew enough names going in to figure this was a fairly high-profile collection. And some of them write stories here within their own series’ universes, using established series protagonists (or not. But more than that might give away a few twists). Ironically, three of the authors live in Alaska (perhaps because the editor was born in Anchorage).

I got the impression that this book is intended as a sampler of these authors’ works, to give you a taste in case you wanted more. In that regard, I’d say the book’s successful. I was surprised to find the Sookie Stackhouse tale, “Lucky”, for example, more charming and less trashy than True Blood, the HBO show based on that series. I also enjoyed Simon R. Green’s “Nightside” tale, “Appetite for Murder”, even though I’d totally ignored his stuff on the shelves as ubiquitous and derivative-looking until I caught sight of a recent cover with his John Taylor protag wielding a sword. Never underestimate the power of a good cover – trenchcoats and sharp objects get me most times.

The anthology was lighter in tone than I’d expected, with fewer Gothic or cozy mysteries than the cover implies (though Sharon Shinn’s “The House of Seven Spirits” is nicely traditional Gothic). Many of the stories have an arch sense of humour and none of them really devolves into horror (though Green comes close). The authors put their skills on full display in most cases, efficiently establishing worlds and characters within the first few pages, but none of the stories seem likely to light any award fires any time soon. You’ll get your money’s worth, but this is still a tease to get you into reading the authors’ more significant works. If you don’t mind that, or you’re looking for a light evening’s read and/or wanting to try out some new authors in the cheap, this book will hit the spot.

You can find Unusual Suspects at Amazon.com.