Acacia Rhiannon Nokomis co-reviewed The Event for us last season. This year, she and her partner-in-review, J. Keith Haney, will tackle new NBC show, Grimm. Get acquainted with her this week, in an article about the Welsh mythological hero, Gwydion fab Dôn.

The word “mythology” is one that generally takes one’s mind to Mount Olympus, and the gods and goddesses who reside 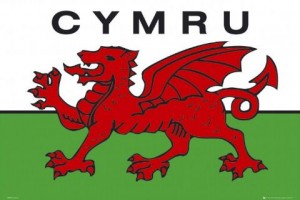 there, or perhaps to ancient Rome, or even to the Norse. But few people think first of the Celtic stories of the great Gwydion or his son, Lleu Llaw Gyffes. There are many other tales, but these may be the most interesting because they follow the path of Gwydion, from his early role as a trickster into his life as a caring father.

The King’s Foot-Maiden and the Pigs of Pryderi

Gwydion’s story is best begun with the tale of the king’s foot-maiden and the pigs of Pryderi. The tale is one in which Gwydion actually seems to be taught a lesson. King Bran had an interesting problem – his feet could only touch the ground during times of war. The rest of the time, his feet had to rest in the lap of a true virgin. Gwydion’s younger brother, however, fell in love with this beautiful young maiden. He tried to persuade her to make love to him and was rejected. Embarrassed and angry, he turned to his brother, Gwydion the Trickster, for help. Not being a man of wisdom in those days, Gwydion readily helped him.

Pryderi was a king, the son of the great King Pwyll and the former goddess Queen Rhiannon, who made a deal with a traveler (Gwydion, of course) for the sale of some pigs in exchange for lavish treasures of gold and silver. Pryderi, naturally, thought that he was getting the far better end of the deal, but Gwydion – especially as a young man – was a trickster by nature. As soon as he had gotten away with the royal swine, the gold and silver turned to moss and weeds – released from the magical charm Gwydion had placed on the worthless plant life. Then and there, Pryderi declared war. This was, of course, Gwydion’s goal, because then King Bran was able to place his feet on the ground to wage a war that he did not yet know to be unjust. Unfortunately, Pryderi also laid a curse upon the thief – that his flesh would be eaten by the swine he had stolen.

This left the young foot-maiden free to do something other than hold the King’s feet. This meant she was also free to be assaulted by the brothers. Young Gwydion guarded the entrance to her chamber, allowing his brother to enter and have his way with her. But when the King returned from war, having learned of Gwydion’s prank against Pryderi, he was already angry. Then he discovered that his foot-maiden had been raped and was, therefore, no longer a maiden at all. He became truly enraged, quickly putting together the chain of events, and enchanted the brothers. For a year, Gwydion had to live as a stag and his brother as a doe. They were forced to mate with one another. The next year, Gwydion was a sow and his brother a boar. They were forced to mate again. The next year, they were a pair of wolves, forced once more to produce offspring. They continued to live as different animals for several years, each time something a bit higher on the food chain, each time switching genders and producing offspring with one another, until they were finally human, and themselves, again. The lesson? Don’t start a war to rape a King’s prized virgin, no matter how pretty she is, unless you have a thing for being an incestuous animal.

The next story is not Gwydion’s but his sister’s. It’s unclear if Arianrhod was replacing the raped virgin or simply trying out to replace a maiden who was retiring (After all, no matter what an honour it was considered to be, who wants to have the job of holding the king’s feet her entire life?). The thing that is clear is that Arianrhod had a bit of confusion over what the King was looking for. You see, the word “virgin” once referred to any unmarried lady and the word “maiden” is what we consider to be a virgin today. This took place during the transition period for that word and Arianrhod didn’t know that any such transition was taking place. She was Gwydion’s sister and the two had once had an incestuous relationship; she had once also “loved” Manannán Mac Lir, the sea god. She had used magic to prevent pregnancy in both cases.

The virginity trial consisted of the woman stepping over a magic wand. But when Arianrhod did so, two children emerged from her body. One dove immediately into the sea and swam away, but Gwydion took the other young one to his chambers and placed the premature infant into a magical chest until the proper time came for the child’s birth. This boy would eventually become Lleu Llaw Gyffes.

Lleu, in the early days, had no name. His father and uncle, Gwydion, raised him alone. But, eventually, the time came when

it was unfit for him to continue being called “child” or “boy” and he needed a name of his own. The tradition was that the name must be placed upon him by his mother, but Arianrhod had refused to do so. She still nursed her wounded pride after her virginity trial and had disowned her sons at the moment of their appearance.

So, Gwydion, still a bit of a trickster, disguised himself and the child as bootmakers and went to Arianrhod’s land by the sea. There, Gwydion began to sing, as did many tradesmen of those days, to entice customers to buy; “Lady, my lady, we are bootmakers, the best in the land! Won’t you come down that I may fit your feet? Place them in my hands.” When she approached the boat, the boy did as his father had instructed him. He took a stone and threw it, hitting a bird in flight.

Arianrhod gasped, “Why, did you see the little sure-shot? The lion with the steady hand! Lleu Llaw Gyffes!” The moment these words left her mouth, Gwydion released the magic charm, turning the boat back to driftwood and the shoe-leather back to seaweed, and thanked her for her son’s new name. Arianrhod was angry. She swore that the boy would never be armed and, therefore, never sit on the throne as King, unless those arms were placed upon him by his mother. And she then refused to do so.

Several years passed until the boy was too old to go about completely unarmed, so they again disguised themselves and returned to Arianrhod, this time as musicians. Again, Gwydion sang, “Lady, my lady, we are wandering bards. May we play for you? We know songs of wonder; we know tales and more – at your feast for you!” She took them in, but the next morning, there was an invasion. Gwydion offered assistance, telling her, “Lady, I know my business, but help to arm the child.” And she did. The moment the boy was properly and fully armed, the invaders vanished back into mist. Gwydion smiled and thanked her for her son’s new arms.

Again, she was angry, this time swearing that the boy would have no wife born of woman. This problem had Gwydion rather stumped. So, he went to his uncle for assistance. Together, they made a bride for the boy made out of magic and flowers. And her name was ‘Blodeuwedd’.

The wife made for Lleu by Gwydion proved to be as disloyal as she was beautiful. While her husband and uncle were traveling, she would be left at home to tend to affairs at the hearth. Once, while they were gone, she met a young man whom she decided she preferred to her husband, named ‘Garynweigh’. The two became lovers quickly. When Lleu returned home, his wife and her new man killed him. He was transformed into an eagle and flew off. Blodeuwedd then disguised her lover as Lleu to hide his true identity from those who may have questioned her about her husband’s whereabouts.

Gwydion’s Search for Lleu and Bringing Two Killers to Justice

When Gwydion returned home, he could tell that Garynweigh had taken the place and appearance of Lleu. Blodeuwedd’s 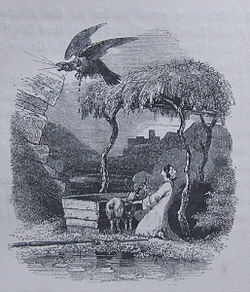 magic wasn’t powerful enough to fool him. And so, he set out on a journey to find his son and traveled the land. He paid particular attention to the animals of the sky, because the ancient Druids believed that the spirits of the dead would often take the form of flying creatures to aid their travel on the wind, which would carry them to Tir na n’Og, the place souls go after death. He traveled for a long while before he arrived at a village, where he discovered a sow who refused to eat with the others, yet she and her piglets appeared to be well-fed.

A terrible idea struck Gwydion, so one evening, he followed this sow and her piglets to the foot of an old oak tree. There he found an eagle, looking not at all well. The bird’s flesh was rotting and would fall to the ground, where it would become the pigs’ meal. It was the curse of Pryderi, come to fruition. The flesh of Gwydion was being consumed by the pigs he had once stolen.

Gwydion wept, but forced himself to overcome his grief. He sang to the bird, sang his name to him, and the eagle slowly fluttered lower and lower, until he landed on Gwydion’s knee and was turned into the broken body of Lleu. Gwydion took his son home and healed him, though it would be many months before Lleu was well enough to seek justice against his attackers. It was the next midwinter when Lleu battled Garynweigh to the death, this time defeating him.

As for Blodeuwedd, she literally met her maker in the form of Gwydion, who turned her into an owl.

This completes the transition of Gwydion as a purely selfish character into the type of father who thinks first of his child. By the end of his tale, he is a far cry from the troublesome youth who once started a war to give his brother the opportunity to rape an innocent girl.