A friend once told me that Rod Serling had always thought there was something weird about his hometown of Binghamton,

NY. That was something that has stayed with my thoughts through the years. Through my research, I did not find anything mentioning that Serling felt that Binghamton was any more weird than anywhere else, but he was very enamoured with his hometown, perhaps to the point of obsession. He only lived in Binghamton until he was 18 years old, but he was known to return to Binghamton for any number of reasons, sometimes up to as much as 12 times a year. He would make trips even from LA, just to give a speech in his old hometown. He would often visit alone, just for nostalgia’s sake.

Binghamton is located in Broome County, in south-central New York, not too far from the Pennsylvania border. It is at the confluence of two rivers, the Susquehanna and the Chenango. It was first settled in 1787 and was then known as Chenango Point. Later, it was renamed after William Bingham, who was a landowner in the area. It was once known as the “Parlor City of New York”, and has six running carousels, all of which have always been free to ride. One of the carousels inspired the one featured in the Twilight Zone episode, “Walking Distance”, which was based on Binghamton. Binghamton was a successful area, even during the Great Depression, mostly due to the Endicott-Johnson Shoe Company, founded by Henry B. Endicott, who, in 1899, made George F. Johnson his partner. Many people coming through Ellis Island in the early 1900s would ask, “Which way to Eee-Jay?”

Rodman Edward Serling was born on Christmas Day in 1924, in Syracuse, New York. That is about an hour-and-a-half

driving distance from Binghamton. Back then, it was much closer to a three-hour trip. Serling’s parents, Sam and Esther, and his older brother Robert, moved to Binghamton in 1925. Rod loved Binghamton. Joel Engel, who wrote the biography, Rod Serling: The Dreams and Nightmares of Life in the Twilight Zone, wrote this of Serling on page 21:

Rod Serling and Binghamton were perfect for each other. Each projected a persona that gave little hint of the ironies hidden beneath. A sublayer [sic] of subtle but insidious anti-Semitism affected all Jews in Binghamton’s small-city “perfect harmony,” including the Serlings. Likewise, Serling’s carefree, buoyant, easy-going exterior hid a very real sense of desperation […] Binghamton and Serling were, in significant ways, mirror images.

Rod Serling, of course, was most well-known for his television series, The Twilight Zone, which first aired on CBS, October 2, 1959, at 9:30pm. The show is instantly recognizable by its opening of surreal images and the voice of Rod Serling, himself, saying, “There is a fifth dimension, beyond that which is known to man. It is a dimension as vast as space and as timeless as infinity. It is the middle ground between light and shadow, between science and superstition, and it lies between the pit of man’s fear and the summit of his knowledge. It is an area which we call The Twilight Zone.”

What inspired Rod Serling? His brother Bob said that he was inspired by his “lifelong love of horror films, his war experiences, and the stories of such writers as Robert Heinlein, Ray Bradbury, and H.P. Lovecraft.” (The last of which is very relevant to this website!) Serling’s wife, Carol, said, “Rod wanted to believe in the unseen, but had no direct experiences himself.” Binghamton, itself, of course, was also a very strong influence in Serling’s stories. He wrote of himself in 1959, “Everybody has a hometown. In the strangely brittle, terribly sensitive make-up of a human being, there is a need for a place to hang a hat, for a kind of geographic womb to crawl back into. Binghamton’s mine.”

“Walking Distance” was not the only episode inspired by Binghamton, though that specific episode is nearly biographical of

Serling himself. In “Walking Distance” (first aired October 30, 1959), a man by the name of ‘Martin Sloan’, an advertising 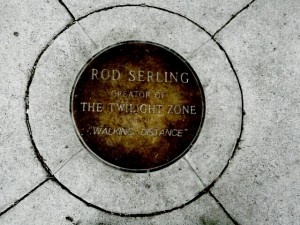 executive, tired from his job in New York City, begins driving. He soon realizes that he is very close to his hometown of Homewood. He stops at Mr. Wilson’s shop to buy an ice cream soda. Sloan does not notice that Wilson himself is working in the back of the shop. He doesn’t notice anything amiss until he runs into his parents and his 11-year-old self at the local park, where he played as a child.

While the episode itself was not filmed in Binghamton, it was clearly modeled after Recreational (“Rec”) Park, which is on Beethoven Street. The carousel in the episode was modeled after a carousel that is still operational in Rec Park today. No one believed Sloan was who he said he was. Later, his father told him that he believed his story, but that this was not his time and to invade it would be wrong. Once he left Homewood, he was back in his own time again. The point of the episode is that, no matter how much we may love where we came from, we can never truly go back. I believe this was probably a frustration to Serling in some ways, for, as much as he loved and was enamoured with Binghamton and returned there many times, he never lived there again.

Another episode, “A Stop at Willoughby”, featured yet another advertising executive who was also suffering from stress. The man, Gart Williams, dreams of escaping to a town called “Willoughby”. He learns that Willoughby is a “peaceful, restful place, where a man can slow down to a walk and live his life full measure.” Things continue to get worse for Williams at home and at work. He finally decides that he will get off the train at Willoughby and he does. He sleepwalks off the train to his death! Willoughby most likely was Binghamton, which Serling remembered very fondly throughout his entire life. He may have dreamed that he could be there through the stress of his life during his “Twilight Zone Years”.

I am sure there are other episodes which were autobiographical, in one way or another, for Serling and had some influence 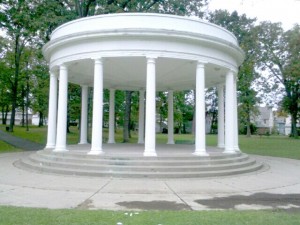 from Binghamton. In fact, there was at least one episode which mentioned Binghamton outright as a train stop. Most viewers of the show are probably completely unaware of just how autobiographical The Twilight Zone was.

If you ever happen to be traveling in New York along Route 17, you may want to take a drive through Binghamton and see some of the places which were important to Rod Serling in his early life.

His childhood home is still standing at 67 Bennett Ave. He often came back to walk around that neighbourhood, which is, in fact, walking distance from Rec Park, six blocks away. I have seen the house, but I did not take a picture because it is a private residence. There are pictures of the house on the internet, though, easy to find through a Google search.

Next, I would recommend visiting Rec Park at 73 Beethoven Street. During the summer, the carousel can be ridden for

free, as can all of the other five carousels located in various places in Broome County. (However, they are all quite old and, sometimes, may be under repair.) At the time of this writing, the carousel is currently running. In fact, it was running when I took this picture. The man running it was nice enough to wait until I snapped a quick picture before he started up the next ride.

Don’t leave the park without checking out the bandstand, not too far from the carousel. The bandstand was the inspiration for the bandstand featured in “Walking Distance” and has a plaque dedicated to Rod Serling.

Rod Serling’s high school still exists and looks a lot like it did when he attended there. There is a New York Historical Landmark sign near the sidewalk in front of the school.

The next place of interest is Binghamton’s own version of the Hollywood Walk of Fame, located at the entrance of the

Binghamton Metrocenter at 49 Court Street. It contains stars for many of Binghamton’s famous people. Most notably, a person will find stars for Rod Serling and Johnny Hart, the creator of the BC and The Wizard of ID comic strips, (‘BC’ standing for both ‘Before Christ’ and ‘Broome County’).

The last place to visit would be the Binghamton Forum. It contains a small exhibit for Rod Serling in the lobby. It also contains many photos and memorabilia. This is the only place I did not personally visit. It is located at 236 Washington Street. Call (607) 778-2480 for lobby hours.

Engel, Joel. Rod Serling: The Dreams and Nightmares of Life in the Twilight Zone. Penguin, 1992.

Wikipedia page for “A Stop at Willoughby“.