Before dawn on October 13, 1307, 712 years ago to the day, agents of the King of France marched into preceptories, commanderies and granges of the Order of the Temple throughout France and arrested all of the brethren there. Templar monks were hustled off to jail, including their leader, the Grand Master Jacques de Molay. The charge was heresy, the motive most likely sheer greed. With a pope in his pocket, the King of France was able to persuade or force other kings to arrest the Templars in their own countries over the coming months. Five years later, that pope, Clement V, suppressed the Templar Order and distributed most of its brethren and property to its brother order and rival, the Hospital of St. John (AKA the Hospitallers).

Two years after that, the Trial ground to an inconclusive halt when Jacques de Molay was burned for recanting his confession of heresy at the last minute (and embarrassing the King of France). The King and the Pope followed de Molay the same year. And ever since, the Templars have been absolutely famous for pretty much everything but what they were.

So, who were the Templars? Around the year 1119, in Jerusalem, a group of Christian veterans of the First Crusade decided to form what’s known as a “tertiary order” (the traditional number is nine, but there were probably more than that). That is to say, they were a group of laymen who pledged their obedience to the Patriarch of Jerusalem and swore to “live in the world” but according to monastic vows of poverty, chastity and obedience.

The Templar mission was simple and, over the next two centuries, it never changed: to patrol the pilgrim routes of Palestine and protect the shrines, relics and pilgrims there. No distinctions were made about the religion of those shrines,

relics or pilgrims, either. The Templars took on other roles and were dragged into many a stupid endeavor over the years, but that one, simple mission always remained the same.

This group quickly grew in popularity, quickly enough to make the Church a little nervous. Fortunately, the Templars (named after their base on the Temple Mount in Jerusalem) had acquired an enthusiastic groupie in the form of living saint Bernard of Clairvaux. They became the first military religious order in 1129: monks who fought as soldiers.

As you can imagine, this idea divided Christians a bit. On the one hand, there were people (namely, a lot of knights and other soldier types) who happily looked forward to the opportunity to serve God in a way that employed their skills (namely, killing bad guys and defending innocents) better than joining a monastery and praying all day long. Others, however (many of them monks or priests of the praying type) thought that the Templar mission of killing non-Christians (which wasn’t actually the Templar mission, anyway) was totally inappropriate for men of God, especially those imitating the life of Christ and his apostles. Never mind that men of God had been cheerfully riding off to war for centuries.

For a while, the Templars’ supporters prevailed. Western Europeans desperately needed level-headed, impartial soldiers who would ride in when things got ugly to kick a little ass and take a few names on behalf of God, the underdog, or a decent donation to the Church. The Order raked in a lot of land and rents over the next century and a half on the promise to fulfill that need.

Defending the Holy Land turned out to be a very expensive and the ultimate thankless task, not helped by the Templars’ being dragged into other ventures, like 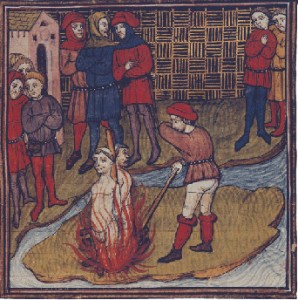 the Reconquest of Spain from the Muslims. The Templars frequently found themselves stretched thin, indeed. Unfortunately, this didn’t stop others (mostly kings and lords) thinking they were rich and could be ripped off. Suspicions also rose that the Templars, in their attempts to stay on reasonable terms with their Muslim neighbours, got a little too cozy with Islam.

Still, it was shocking to most Christians in the West when the Templars in France were arrested 16 years after the last Christian-controlled city in Palestine fell to Muslim Mamluks in 1291. Muslims and Jews in the West also really felt the Order’s absence – the Templars had been known to mediate between them and the crazier Christians. After the Templars went, nobody was exactly willing to step up to the plate for any religious minorities in that part of the world.

Maybe it’s not so surprising that when the English and French had a romanticized revival of interest in the Middle Ages in the 19th century, the Templars and their mixed reputation would also come roaring back. 18th-century secret societies like the Freemasons and Illuminati had already tried to claim Templar ancestry and inspiration, under the (mistaken) notion that the Templars had been secret rebels, themselves, against the Church.

And maybe it’s not so surprising that when you’ve got a bad situation in horror or dark fantasy (or even a western) and you need a Man with No Name, Indiana Jones or a pair of Brothers Winchester, they’re going to come from that old medieval tradition. Who doesn’t wish that when the zombies or the vampires are gathering round, somebody will come riding in to kick some zombie ass and take down some vampire names and save the underdog one more time?

If you enjoyed this article, please consider making a small donation to Innsmouth Free Press.