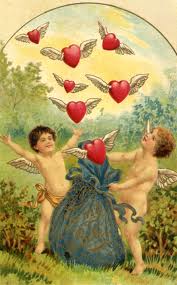 The coming spring – along with the charm, mystery, and promise of Saint Valentine’s Day – makes me think of Humanity’s utter insignificance. After all, Saint Valentine was the name of perhaps a dozen or more different martyred saints, including one man who was beheaded after the literal sticks and stones broke his bones, but could not kill him. The patron saint of love, marriage, engaged couples, and beekeepers has both old-Roman and Prohibition-era gangster executions associated with his name. Thus it seems only fitting that Valentine’s Day has so many dark and cynical facets carved into its observance. One of my favourite traditions for the holiday is a reverence for the legendary writers of the Naturalist movement, who both skewered popular notions of romance and unwittingly served as forebears for some of our favourite scary stories.

Literary Naturalism was a counterculture reaction to the unrealistic moralism and idealism of the Gilded Age’s Romanticism. The name ‘Naturalism’ refers to the movement’s propensity for depicting humans as natural creatures driven by base instinct, influenced by both heredity and society, and no more special or unique than an owl, sloth, or Venus Flytrap. A memorable poem from an early Naturalist, Stephan Crane (of The Red Badge of Courage fame), ably embodies this philosophy:

A man said to the universe:

“However,” replied the universe,

“The fact has not created in me

a sense of obligation.”

This poetic expression of cosmic insignificance is eerily prescient of the works of H.P. Lovecraft three decades later, among other science fiction authors influenced by the rise of modern astronomy. Similar to how developments in science and technology, and their dangerous promises of forbidden knowledge, instilled Lovecraft’s horror with its scientific pessimism, unsettling trends in culture, family, economics, and health left many writers, circa 1900, deeply dissatisfied with the popular stories of the day, where the perfect hero always saves the day and gets the girl. The photojournalistic work of Jacob Riis exposed the true face of poverty and disease to the public and was credited as a significant influence in Naturalism.

The novels and short stories born from this movement, besides leaving the so-called “sensible audiences” aghast with their stark depictions of reality, created a vein of fiction so bleak that some works verged on outright horror without a single killer or monster needed. Theodore Dreiser’s breakout work, Sister Carrie, depicts the exploits of the titular young woman, who moves to Chicago in search of wealth and comfort. After she uses a series of relationships as stepping stones towards this end, her surprising acting talent transforms her into an overnight sensation; meanwhile, a married man she had a relationship with, George Hurstwood, witnesses his own life collapse around him after he is abandoned by Carrie, before committing suicide in a flophouse room he paid for with money begged from passing crowds. (Have I wished you all a happy Valentine’s Day, yet?) Besides spitting in the face of heroic love stories, Drieser’s story left contemporary critics (including his own publisher) livid that he seemingly rewarded the “wicked” Carrie. These detractors obviously did not care to acknowledge that society does not dole out reward and punishment based upon the moral code they fervently espoused. As there are many celebrities who seem to enjoy fame and fortune without truly deserving it, consider that Dreiser’s Sister Carrie is also studied as an early demonstration of the 20th century’s “Cult of Celebrity”, as the successful actress Carrie begins receiving generosity, respect and marriage proposals from complete strangers, who simply know her face and name.

Other notable Naturalist writers included F. Scott Fitzgerald, who both wrote and lived romances that could curdle milk with their dysfunction, and Ernest Hemingway, who seemingly decided to skip romantic satire and flat-out insult women, on the whole. Personally, I would like to again mention one of Stephen Crane’s contributions to Naturalism – the novella, Maggie: A Girl of the Streets – simply because it is not nearly as mainstream as The Great Gatsby or A Farewell to Arms. However, I would consider all three stories at least partially horror in genre, for their frightening insights into humanity and reality. Crane, unlike Dreiser, had the sense to disguise his scathing criticism of romanticism and moralism with a tacked-on, ironic-in-how-forced-it-is ending to satisfy contemporary critics who may have buried Crane (as they nearly did Dreiser). In one of the crowning moments in Maggie, after the title anti-heroine’s notions of romantic love have been utterly dashed in a sleazy vaudeville theatre, the destitute young woman encounters a well-off man helping the unfortunate, but he brusquely avoids her because he does not want to be seen with them. If such hypocrisy, certainly as alive and well in society today as it was over a century ago, is not horrifying, then no zombie or alien monstrosity ever could be frightening.

H.P. Lovecraft’s works function under the reality that, beyond the curtain of the unknown, there are unfathomable entities that can barely be bothered to view Humanity as mere playthings. The non-speculative fiction authors of the Naturalist school also presented horror in the workings of the cosmos, but they ramped up the existentialist fear by both forcing cognisance on their readers (something the Lovecraftian style avoided) and forcing the audience to confront that, rather than monsters, what makes life so wretched for humans is nothing but nature, chance and our flawed humanity, itself. This is the fine line that divides Naturalist from Lovecraftian fiction: While we are simply dust in space, we don’t even deserve nameless terrors to enliven the whole mess.