H.P. Lovecraft was pretty thorough in his survey The Supernatural Horror in Literature, but he did not possess a crystal ball. He was limited to the works he had access to – which were surprisingly many. But there was no way he could have predicted which forgotten authors would re-emerge in the light of the second half of the century. Authors like the neglected master, J. Sheridan Le Fanu. Lovecraft mentions no Le Fanu works, seems oblivious to the greatest horror writer since Poe. That was how far Le Fanu had fallen by 1927. It would take M.R. James’ collection of Le Fanu’s horror tales, Madam Crowl’s Ghost and Other Tales (1923), to rekindle interest in the Irish master. H.P.L. missed this volume, or never had time to revise his essay if he later found out about it.

Joseph Sheridan Le Fanu is a lynchpin writer, the very first to make a career of writing the 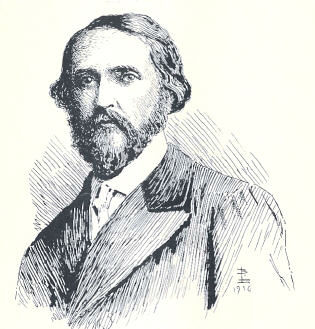 Weird. Those before and after were hobbyists, taking out the ghosts for Christmas numbers, but usually working in other fields. (Dickens, Stevenson, Kipling, Conan Doyle, Wilkie Collins, all contributed excellent examples that Lovecraft applauds, but none is a horror specialist.) Le Fanu, by comparison, wrote every kind of Weird tale, from Irish bogey stories like “The Child That Went With the Fairies” to extremely subtle psychological pieces such as “Green Tea.” Also, since Le Fanu is so innovative, his work isn’t the refined singular example of one kind of Weird tale but an entire spectrum, exploring the Gothic in terms of horror, mystery and that odd blend between which would morph into the “ghostbreaker” sub-genre that M.R. James did not approve of.

By the 1880s, the separation of these types of tales would widen, with Sherlock Holmes solidifying what Poe’s Dupin had begun, clearly establishing that “No Ghosts Need Apply!” At the other end, Dickens’ stable of Christmas spinners – including Amelia B. Edwards, Rhoda Broughton (Le Fanu’s niece) and Elizabeth Gaskell – were establishing the parameters of the English Ghost Story, a genre of tale that M.R. James would bring to the highest level in the next century. In between, writers like E. and H. Heron created the occult detectives such as Flaxman Low, who, in each story, might or might not arrive at a supernatural conclusion. But Le Fanu wrote before this divisive environment existed and his work dwells in a Gothic world of shadows and mystery where anything is possible.

To get back to H.P. Lovecraft, it seems odd to ask the following question, but here it is: “What influence did Le Fanu have on Lovecraft and his Mythos?” How can an unknown author influence someone who has not read them? The question remains fair, for Lovecraft read so many of those who followed Le Fanu, were influenced by him, that, by proxy, Lovecraft himself was influenced. Authors who were strongly influenced by Le Fanu, besides M.R. James, who has already been named, include: Bram Stoker (and through him, Gerald Biss), Walter de la Mare, E.F. Benson, and that entire ghost story crowd, as well as Arthur Machen, Algernon Blackwood, William Hope Hodgson, and everyone who wrote of occult detectives. The point is: Lovecraft read all of these, mentioning them in his essay.

What strikes me as most interesting is that Poe was HPL’s great favorite, but Poe was the guy who beat the supernatural Gothic into shape, creating the more modern “psychological” horror school. It is Le Fanu who undoes this to some degree, finding a new way (unlike that of the old Gothic novels) to use the supernatural. Lovecraft worshipped Poe, but his own style of “cosmic horror” requires the use of monsters, monsters that were inspired by M.R. James, Robert W. Chambers, Arthur Machen, H.G. Wells, and others. Despite Lovecraft’s idolizing Poe, it is actually the Le Fanu school that built the Mythos pantheon (or those closely in tune with it). HPL is a monster writer, even if his hero was not. (Name one famous Poe monster to match Dracula, Frankenstein’s Adam, or Mr. Hyde. I’ll wait. I’ve got time.)

The really great writers cast big shadows. I can imagine some new writer today (being completely into the works of Stephen King, Ramsey Campbell, Brian Lumley, etc. but ignorant of HPL) writing a quasi-Mythos tale without even being aware of it. Lovecraft’s influence is that big. Le Fanu was that big, too, perhaps even bigger, since he has had that many more decades to spread his influence. Nobody writes in a vacuum, not even those who write in time and space.

The Trail of Lovecraft continues with “Recycling the Mythos” ….