[dropcap]I[/dropcap] saw something that bothered me the other day. A professional writer whom I admire said something to the effect that Clark Ashton Smith was a bad writer, but he had a great imagination. If writing is defined by the post-Hemingway mainstream, then yes, Clark Ashton Smith was wordy, obtuse and fruit-cake rich. But if you get past the over-poetic language (in some but not all stories), Smith has more going on than most Pulp writers and any mainstream writer when it comes to creating an aura of cosmic horror and weird beauty. In this sense, he is a good writer. H. P. Lovecraft selected him alone of new writers for his essay, “The Supernatural Horror in Literature,” saying, “Of younger Americans, none strikes the note of cosmic horror so well as the California poet, artist and fictionist Clark Ashton Smith, whose bizarre writing, drawings, paintings, and stories are the delight of a sensitive few.” Writers who have acknowledged a debt to Smith include Harlan Ellison and Jack Vance, both accomplished stylists.

In “New Cthulhu Chic,” Amy H. Sturgis uses a Nabokov expression – shamanstvo, the ‘enchanter quality’ (Apex Science Fiction and Horror Digest, December 2005) – to describe the power that H. P. Lovecraft had. I would agree with her that Tolkien also had this quality. I think Robert E. Howard and Edgar Rice Burroughs did, too. These four writers are widely read and collected decades after their deaths, while many celebrated authors have fallen into obscurity. (Do you remember Lloyd C. Douglas and Green Light? What? The best selling novel of 1935, the same year CAS quit writing?) Clark Ashton Smith seems to me to be the next great thing. It is time his shamanstvo was appreciated. (I want to see lots of people writing ornate dark fantasy in the Smith mode.)

Are any of the above mentioned “good writers”? I think not. Lovecraft chose an out-dated prose 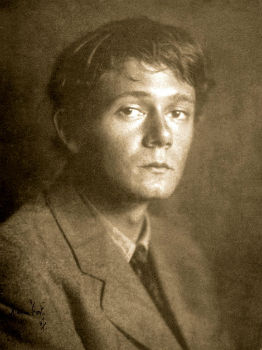 style after Poe. Tolkien can write some stellar stuff (Read Farmer Giles of Ham!) but he also pens long, dull bits in The Lord of the Rings. Burroughs is perhaps the worst stylist, but succeeds despite this. Robert E. Howard, I think, is vastly underrated as a word-smith, for he had a magic that none can duplicate (and many have tried). Storytellers all. Stylish craftsmen? Perhaps not. Of them all, Smith is the one most concerned with style as an end in itself.

It is easy to misjudge a work of art if you use the wrong criteria. (Clark Ashton Smith was an artist, too, so let’s use an art analogue.) An oil painter might criticize a watercolorist for not using repeated brush strokes. The watercolorist shakes his head and shows how this oil painting method would not work on absorbent watercolor paper. We can do this with writing, as well. Remember that economy of language can create certain effects (particularly a journalistic feel), but can it give us beautiful, lush images that linger in the mind like a good painting? Writers use characters and description and dialogue and many other tools to create stories. The purpose to which these are used or needed varies to the purpose the writer sets. Would Hemingway-sparse dialogue increase the terror of Lovecraft’s horrific spell? I think not. For example:

“They look like white elephants,” she said.
“I’ve never seen one,” the man drank his beer.
“No, you wouldn’t have.”
“What’s that?”
“I have no idea. It looks like a giant octopoid head with wings and a bear-like body!”
“I am losing my mind – but I still hate you for being pregnant ….” etc.

If it is terseness you desire, then I can recommend no one more highly than Lester Dent writing Doc Savage novels as ‘Kenneth Robeson.’ Great stylist? Not at all. You want to learn how to keep a plot moving? None better. Again, it speaks to purpose. What do you want to accomplish with your story?

To be fair, we need to try the reverse, Clark Ashton Smith-styled mainstream:

Now, after making certain highly incomprehensible calculations, he maneuvered the machine of velocity so that its other end would fall upon the particular span he desired upon the surface of ebon pavement. Then, assuring himself that his perambulations and navigations were not faulty, he expanded the aperture of the vehicle and trod upon the dust of these hidden places, and he did not lose balance or slacken pace. An emblem posted pon the sward nearby declared, “Do not park on the grass.”

Despite being the next great thing, perhaps something as simple as parking the car does not suit such an opulent style?

I kid, of course. But as a Mythos writer, you will have to choose a style for the story you want to write. You may want an old-fashioned Victorian diction or pace if your story requires a slower building up of images. Thomas Ligotti has used this deliberate non-journalistic flavor with great success. Wilum Pugmire has chosen a lyrical, symbol-richness for his Mythos work, which deals largely with emotional events. Myself, in my Book Collector stories, I have chosen a Noir feel, which requires a fast moving plot, Pulp style logic, and, at times, gruesome situations to create any frisson of horror. Whatever style you choose, one I hope you will try to avoid is mock-Lovecraft, because after the 30s, 40s, 50s, 60s, 70s, 80s, 90s, 2000s, and now the 2010s and onward of pastiches, it’s time to give it a rest. Try a little Clark Ashton Smith, instead. I hear he’s the next great thing ….

The Trail of Lovecraft ends with “With Trembling Pen In Hand …”