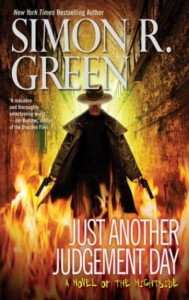 Private dick John Taylor and his platonic girlfriend, scary Suzie Shooter, are engaged in the usual day on the Nightside (“that secret centre of London where the clocks always read three A.M.”) – killing some and saving others. After a deadly encounter with a version of Frankenstein, they get a visit from the unofficial ruler of the Nightside, Walker, with a strange request and an invite to the Adventurers Club (where neither Taylor nor Suzie is normally welcome), to meet with the new Authorities (the official rulers of the Nightside), who don’t get along especially well with Taylor. It seems that the Walking Man, a direct agent of God’s wrath in the form of an Old West gunslinger, is coming to the Nightside to wipe it out.

A lot of the action in Just Another Judgement Day is predicated on the novel being a late one in the series (#9) and a clear sequel to one from two entries before, Sharper than a Serpent’s Tooth. In that book, Taylor and a bunch of other people narrowly averted an even bigger apocalypse introduced by the original creator of the Nightside, Lilith the Mother of Demons and Monsters. Lilith also just happened to be John Taylor’s mother. While John held no love for his sinister parent, and is human, he’s also a human with abilities and a son who was originally programmed to follow his mother’s commands. So, you can see how that complicated things for him.

That situation continues to complicate things in Just Another Judgement Day, but the apocalypse this time round is both less spectacular and more puzzling. The Walking Man won’t stop until his vengeance is satisfied (which is unlikely to happen) or he is destroyed (which is impossible without using a thing or two with even worse consequences). So, Taylor chases the Walking Man around the Nightside, following the trail of flipped-over rocks and trying to mitigate the damage, while figuring out how to save his home from an Irresistible Force without having to use an equally destructive Immovable Object. The answer, when it comes, is pretty obvious but also well-set-up.

The book suffers a bit from being very loose and episodic, and engaging in repetitive description, as well as floundering in the wake of a true apocalypse whose plug was pulled in the nick of time. Also, Suzie Shooter conveniently disappears about a third of the way in, having some important growth while she’s gone that we don’t really see. After the build-up about the necessity of that growth, that’s rather disappointing. On the other hand, Taylor is the Hero of the story not Suzie, and if they have to split up to do different things for most of the book, we’re not likely to follow her.

There’s a lot of humour in some unexpected places. Like the chapter titles. My personal favourite is Chapter Three: “Not Really Fitting In at All at the Adventurers Club.” I can sympathise. Also nice (if sometimes overdone) are the riffs on other tropes and themes in horror. I especially liked the Walking Man’s attack on the Street of the Gods, in which he takes on Cthulhu (who, of course, is not called that, but we know who it is). The Walking Man himself is an obvious take on Preacher‘s Saint of Killers, by way of Clint Eastwood’s Unforgiven. And Green puts in little humanising touches here and there for Taylor (At one point, Taylor is horrified to see the Walking Man killing some guard dogs. Even after he finds out why, he’s still horrified, but he hides it to preserve his reputation as a mean, cold bastard).

That’s perhaps my main problem with the book – Taylor believes he’s an antihero, at best, and Green seems to agree with him. However, we always see Taylor striving to do the right thing and save others and all that jazz. So, at worst, he’s a misunderstood, dirty hero of the noir type, who is perceived as a terrifying, nearly invincible figure in the Nightside by this point in the series. But that’s okay, as I’d prefer to read a series about Sam Spade or Philip Marlowe over Harry Lime or Tom Ripley. Antiheroes can be entertaining in the short run, but their amorality can turn into a real drag over the long haul. Maybe Taylor was like that earlier on (though he doesn’t seem to be in the first book, Something from the Nightside), but he isn’t, anymore. I think that’s for the best. I don’t want to read nine-plus books about a protagonist who can’t ever decide what side of the fence to be on.

You can buy Just Another Judgement Day from Amazon.com.