When I started putting this column together in my head, I thought a lot about how to review movies you may have already seen. I figured what might be fun is to try to place these movies in a sliding continuum from Lovecraftian to Very Very Not Lovecraftian, with plenty of room for debate along the way.

This left me with something of a problem, because if you ask ten people what the most Lovecraftian movie is, you may get eleven or twelve answers. I needed the advice of an expert, someone who know more about Lovecraft than the man himself might have. So I asked Ken Hite, and if you don’t know who he is, you need to pick up Tour de Lovecraft or Dubious Shards and get you some good old-fashioned Cthulhu schoolin’.) When I asked him what the best Lovecraftian movie was, he told me Alien in no uncertain terms. He also bemoaned the fact that he didn’t have a better example of a great Lovecraft movie based on Lovecraft’s own material.

I’d heard this before, and sat down with the movie and some popcorn to give it some serious consideration. 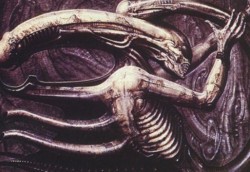 You know what? I think Ken’s right. Alien takes the concepts of maddening, unfathomable cosmic horror from Lovecraft’s page and brings it to life with chilling visual detail. The problem I often have with the translation of Lovecraft to screen is that there is just so much horror in what you can’t see in Lovecraft’s work, how do you do that visually, as required by a visual media. Well, in this case, you get H.R. Giger to design some mind-blowing monstrosities you’re going to terrorize your characters with. The aliens in Alien are so strange and so outside of the natural order you have to wonder where Giger goes when he dreams.

Further more, the creative crew, from Dan O’Bannon to Ridley Scott, really captured the isolation and panic so important to Lovecraftian horror that while you might not be seeing is story unfold, you feel the terror of his characters as they have brushes with the various entities that simply Should Not Be. A seven-person crew being picked off one at a time by an unfathomable horror until only two are left. It’s hard to imagine a space crew being utterly on their own. They must be part a global government or massive company that they can simply call out to for assistance. But corruption in this story, unfathomable evil comes not just from the inhumanity of the aliens, but also from the greedy company that is supposed to support the characters. A spy on the ship, orders to capture the alien even at the cost of the entire crews lives, it’s reminiscent of the mad plans of a secret cult so common to the Lovecraft universe.

So that all said, for now, let’s set the bar at Alien as the best Lovecraftian movie and next time I’ll try to present the worst Lovecraftian movie so we can start to build a scale here at Cthulhu Eats the Movies. Disagree, have some ideas on better or worse movies in the genre? Hit me up in comments and we can talk. I’d love to hear your opinions.