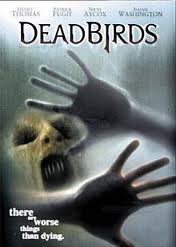 Since, last time, I covered a movie that most would not consider Lovecraftian (that being Phantoms), I figured I would continue the trend of writing about the obscure and unlikely, this time covering a film most never even heard of: Dead Birds. Now, if you have already seen this movie, then bully for you; you’re one of the few. However, whenever I’m talking with horror fans about seldom-seen scary cinema, mentioning this title usually gets the blankest of stares from people. So, because I like this little fright flick for a number of different reasons, I thought I’d give you the heads-up on it. No, no need to thank me; that’s why I’m here.

This movie is a very rare bird (ha), indeed. By that, I mean it is a historical horror movie, so right there, gets it a nod of approval from me. I love when fright films are set in eras other than the modern day. But setting a movie in the past is more difficult and costly than keeping things in the here and now, and most horror movies usually try to do things on the cheap. The fact that Dead Birds is set during the American Civil War was the icing on the cake for me. I mean, can you name the last horror movie set in that time? Okay, maybe you thought of one, but was it any good? Well, this one is, so keep on reading.

Dead Birds follows a band of outlaws who rob a Confederate bank in the Deep South and, in the process, kill a whole mess of people. Yeah, they’re not exactly heroes, so you know that in the grand tradition of EC Comics, some very bad things are going to happen to these pretty-bad people. Anyway, in order to escape the Confederate Army, which desperately wants its gold back, the bank robbers hide out in an abandoned and overgrown plantation for the night. Hey, what could go wrong with that plan?

The robbers are a motley crew, to be sure. There are two brothers, a woman who is naturally someone’s love interest, a burly badass, a racist (in the Confederate South? No way), and a freed slave (in the Confederate South? No way – said without sarcasm). Unfortunately, none of them is all that bright, as, even before they reach the plantation house, they run into a nasty critter that should have told them to keep on a-going. Once they put the thing – which they alternately think is a skinned dog, or a skinned boar, or a skinned bobcat (No one notices that it has an almost-human face) – down, they go on their merry way to the house. Well, hell, I guess they get what they deserve, then.

Once they settle in for the night, the movie becomes a bit of a ghost story with strange sounds in the creaky, old house and the occasional ghostly apparition, to both ratchet up the fear factor and drop the occasional expositional nugget. There’s also a bit of good, old slasher fare to be found here when the gang inevitably break up, wander around by themselves, and then usually die interesting and often-pretty-bloody deaths. Now, before you go and start screaming, “Ghosts? Slashers? That’s not very Lovecraftian!” I’ll come out and say that I agree with you. In fact, I’ll confess something to you: This movie isn’t all that Lovecraftian, at all. But, hey, don’t go away now. Keep reading and I’ll do my best to convince you that, not only does this movie have some fine HPL flavor, but it’s a darn good watch, besides.

Two of the things this movie gets so right are the creepy atmosphere and sense of dread as it takes its time in telling the rather-simple story. Sure, some people may claim that this part of the film moves too slowly. However, I feel sorry for such ADD-addled viewers. This is what good horror should be: creepy terror that has things getting worse and worse for the characters, as the movie takes it time building tension and suspense. In a time when most horror movies go for the cheap *BOO* scares and nothing more, this is a rare and wonderful thing.

Another nice surprise this low -film has going for it is just how not-low-budget it looks. From the realistic sets, props and costumes, to the great-looking cinematography, to the effective special effects – both practical and CGI – this is a very technically-well-made movie. As for the artistic side of things, the acting is far beyond what you would expect to find in a little movie such as this. Not a one of the actors phones it in here and you will no doubt recognise some names, if not faces. From Henry “E.T.” Thomas, to veteran character actor Michael Shannon (who is about to hit the big time playing General Zod in the Superman reboot, Man of Steel), to Isaiah Washington and Mark Boone Jr., who, together, have been in more things than you can count. If all horror movies had a cast this good, the world would be a much better place.

Now we get to the part where I tell you about how this American Civil War, haunted-house, crime drama has links to Old Man Lovecraft, but this is also spoiler territory. I really can’t give you the skinny on one without spoiling some of the mystery, so read ahead at your own peril. And so….

MILD SPOILER WARNING – for the next two paragraphs.

Soon, through dreams, visions and a bit of good, old-fashioned investigation, the outlaws discover the nefarious history behind the deserted plantation. It seems that the master of the house went a bit crazy when his family died of some sickness or the other. This caused him to go out and get himself a Big Book O’ Evil ™ to try to bring his family back from the dead. And if he had to bloodily butcher all his slaves to do it, well, he owned them and could do what he wanted with them, right? Well, he, at least, thought so.

Now, this wasn’t your typical satanic, witchcraft kind of magic book, as there are no five-pointed stars, upsidedown crosses, black robes, guys with goat heads, or other Judaeo-Christian trappings. As one person puts it in the movie, in a very Lovecraftian way, “You have to follow certain rituals to be heard. Most think of them as spirits or ghosts, but they’ve always been here. They exist in a world around our own. They want to change this world.” Also, while there are some typical ghostly apparitions floating about the plantation, most of the time, the spooks are not-quite-human-anymore things. They’re twisted, half-human, half-animal things of meat and horrific faces. As if those that the grief-stricken, murderous father tried to bring back did come back, but they came back wrong and alien. And yes, such horrid things still lurk in the shunned plantation house, just waiting for new people to play with.

Final Verdict: Dead Birds is not an overly Lovecraftian movie. In fact, it only has a hint of HPL wafting through it, like the faint scent of a fine perfume. Still, as a horror movie, it is far better than most and that includes a whole passel of flicks that namedrop the hell out of H.P. Lovecraft and his creations. If you’re a fan of creepy horror, if you’re a fan of historical horror, or if you’re just a fan of well-made horror, give Dead Birds a try.