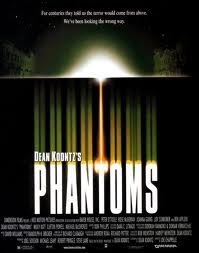 “Affleck was the bomb in Phantoms.” – Jay and Silent Bob Strike Back

Yes, this is a movie based on a novel by Dean Koontz. Yes, I know that Mr. Koontz isn’t known for cosmic, Lovecraftian horror. He’s the guy with the far-too-perfect protagonists, more-scientific-than-supernatural plots, and dogs. Boy, does that man love his dogs. But don’t leave just yet; this isn’t a mistake; and April 1st is still some weeks away. No, I firmly believe that Koontz’s 1983 novel is surprisingly Lovecraftian, and the fact that it never gets thought of as so is the reason I’m talking about the movie it spawned. Yes, this is my chance to set the record straight, so here’s hoping I don’t blow it. Oh, well, on with the show…er, review.

The movie begins with two sisters returning to their tiny, isolated town and quickly learning that everyone it in is missing. Wait; check that: Everyone is missing or dead, as the pair soon find a few bruised, veiny, pulpy bodies of friends and family. Wait, wait; check that again: Everyone is missing or dead and everything else is just downright strange. How strange? Well, heads in a pizza oven; mysterious phone calls; people creeping around on rooftops; and miscellaneous body parts appearing, disappearing, and then reappearing again strange. That’s just for starters. The scared sisters then run into a small group of state troopers, led by the strapping – and wooden – Ben Affleck. The police came to town to find out what was going on and are now trapped with the ladies by an unseen threat that is getting quite a kick out of playing mind games with them.

This part of the film is done surprisingly well. It’s mysterious, creepy and strange, with the weirdness ratcheting up nicely. I shall not ruin the discoveries for you, but I will mention two scenes. The first is a message written on a mirror in lipstick (apparently by a severed hand) mentioning a little-known book by a man known for unusual theories. The other is a cute little doggie. Yes, the first live thing the police and the sisters find in the town is an adorable dog. So, naturally, one of the cops goes up to pet the pretty puppy and…well, let’s just say that soon, there’s one less state trooper in the town.

Now we come to the part where I must advise that you watch this movie, if you haven’t already, before reading any further. Usually, I try my best to avoid spoilers, but if I’m to prove my point that Phantoms is Lovecraftian, then I’m going to have to ruin some of the mystery. So, yeah, here there be SPOILERS!

The book that was mentioned in the writing on the wall is called “The Ancient Enemy”. Its author, Dr. Timothy Flyte, has a very unusual theory on why massive amounts of people have vanished almost overnight throughout history. He believes that there is a great, immortal beast that sleeps deep in the earth for untold centuries at a time. The behemoth occasionally wakes up when its belly starts rumbling and then heads to the surface. It eats towns, armies, even entire civilisations if it’s hungry enough. Hell, he’s even pretty sure it ate up all the dinosaurs. And, wouldn’t you know it, the wacky doctor is right, but he also has no idea of just how god-like this “great old one” is.

First, this Ancient Enemy can form and send drones in all shapes and sizes out of its Blob-y, protoplasmic , shoggoth-like mass. These smaller parts of the whole are the titular phantoms and they can appear as people, cute doggies, and gigantic, prehistoric, face-eating moths. They can also dissolve into black goo and reform somewhere else at will. This allows them to pop up in all sorts of places and escape from locked rooms through drains or slipping between the cracks in a door. The phantoms are psychically linked to the large mother-body that stays hidden away underground. They act as the thing’s eyes, ears, hands, and even its mouth when the Ancient Enemy wants to talk to one of the survivors.

Second, the immortal horror gains the intelligence and memories of anyone it devours. Therefore, it has a near-god-like intellect because, over hundreds of thousands of years, it has eaten a whole bunch of people. However, with all those smarts comes a god-like ego and thus, why it wrote the message on the wall about the book. The Ancient Enemy allows its playthings to call the U.S. government for help and request info from the book’s author. The Feds then grab Dr. Flyte and bring him, along with a biological warfare science unit, to the besieged little town. Why did the undying monster allow this? Because it thinks it’s a god (Okay, it actually thinks it’s Satan) and it wants its own bible written about it. Hmm, or could that be its own Necronomicon? Naturally, the creature’s hubris and belief that it is truly a god prove to be its undoing, because Lord knows that Dean Koontz must have a happy ending to all his stories.

FINAL VERDICT: Phantoms isn’t a great movie. It can drag at times and some of the acting is pretty awful, from wooden and boring (Ben Affleck) to corny and unbelievable (Rose McGowan as the younger sister) to wildly over-the-top and laughably bad (Liev Schreiber as a scenery-chewing, eye-bugging, manic cop). That said, it does have some good things going. As previously mentioned, the first half has some truly creepy moments and a decent amount of mystery. There are winks and nods to other, admittedly better movies in it, most notably, John Carpenter’s The Thing. Not all the actors are painful to watch, as Peter O’Toole is actually quite enjoyable as the slightly mad Dr. Flyte. As for how Lovecraftian it is, I’d say it’s very.

Still don’t believe me? Okay, just read this summation. There is a huge, ancient, undying thing that, most of the time, is locked in a death-dream (hibernating) far out of sight of Humanity. Instead of under the sea like Cthulhu, it dwells miles under the earth. It occasionally stirs from its slumber. When it does, death and madness follow in its wake. So mighty is this monstrosity that it has destroyed (consumed) entire civilisations in the past and could do so again. It has vast, seemingly limitless powers that we puny humans can only comprehend as magical. It is nigh-unstoppable and cannot be killed, except, in this case, by Dean Koontz’s much-beloved science (Seriously, if you don’t believe me, read Koontz’s other books. The man’s like a dark doppelganger of Bill Nye the Science Guy). There are even allusions to cults (It wants to be feared and worshiped) and nods to big books o’ evil with the Ancient Enemy’s desire to have its own bible about it. Add to that the very atheistic and scientific view of legends, hidden history, the nature of this god-like being, and that the heroes defeat the evil through research and logic as opposed to prayers or brute force, and you have the basis for a story H.P. Lovecraft would have approved of. Phantoms is far from flawless, but it is fun and yes, it’s very Lovecraftian.