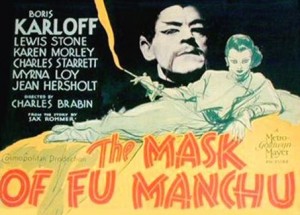 Welcome back to the Vault of Secrets, where, every other week, we’ll be unearthing a classic (or not-so-classic) vintage horror film for your delectation. Tonight’s installment is The Mask of Fu Manchu, directed by Charles Brabin, and starring Boris Karloff and Myrna Loy, as Asians! The version I watched is the second of six movies we’ll be covering from the great Hollywood Legends of Horror Collection, and is certainly the most problematic of the bunch.

Only one of many films based on Sax Rohmer’s Fu Manchu novels, The Mask of Fu Manchu is a window into the so-called “Yellow Peril” genre that was unfortunately popular at the time and, as such, is racist as all hell. It posits the peoples of Asia and the Middle East as vast, superstitious hordes bent on conquering and enslaving the “white race”.

Getting past the racism of The Mask of Fu Manchu isn’t easy, as it permeates just about every aspect of the film. Be it protagonist Nayland Smith despairing, “Will we ever understand these Eastern races?” or Fu Manchu himself exhorting his minions to “kill the white man and take his women!” (A speech that was, in fact, cut from some home video releases of the movie, due to concerns of racism.) Even the casting poses its problems, with the very white Boris Karloff as Fu Manchu and Myrna Loy as his daughter, although they both actually do great work with the characters.

This was one of the first films Karloff did after appearing in his most famous role, that of the monster in Universal’s Frankenstein. From the first time we see him, drinking a bubbling brew in a room filled with crackling electricity, Fu Manchu is a study in cartoonish supervillainy, but Karloff plays him with a certain amount of dignity and makes him far more magnetic than any of the other characters in the film. Next to Fu Manchu, the protagonists (who include a reappearance by our old friend Jean Hersholt, whom we last saw as Baron Otto in Mark of the Vampire) are rather dull by comparison.

At this point in her career, Loy was in the midst of being frequently typecast as “exotic” characters, though she would later go on to great success in other things, including starring opposite William Powell in several of the popular Thin Man films. Typecast or not, though, she brings presence to Fu Manchu’s equally evil daughter that makes her work as more than just a sultry stereotype.

As I said, getting past the racism is a Herculean task, but if you can manage it, there’s certainly a lot to like in The Mask of Fu Manchu, especially for the dedicated fan of movie serials (which this really resembles more than the typical horror movie of the age). Mad science and elaborate torture devices abound, from a “torture bell” to death rays and mind control drugs. While its unfortunate themes make it work more as a curiosity than anything else, at least it’s a fairly diverting curiosity.

That’s it for this installment of the Vault of Secrets! Be sure to join us next time, when we continue our tour of the Hollywood Legends of Horror, with Doctor X in “two-strip” Technicolor!