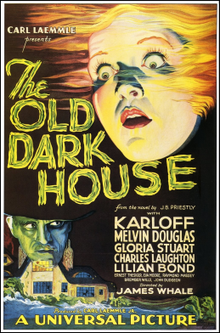 Welcome back to the Vault of Secrets, where we’ll be unearthing another classic (or not-so-classic) vintage horror film for your delectation. I am hard-put to ever list a single favorite movie, in any category, no matter how narrowly-defined. But if you sat me down to start trying to make a list, James Whale’s The Old Dark House would always be near the top of it. While it’s not as famous as Whale’s other Universal pictures of the same era, it’s easily my favorite from among a truly magnificent crop.

Falling right in the midst of Whale’s formidable streak of classic Universal monster films (the year after Frankenstein, and just before The Invisible Man and Bride of Frankenstein), The Old Dark House has the feel of those films, while also still being very much its own creature. An odd mixture of unease and comedy, even in an era when pretty much all horror movies carried extensive comedy-relief elements, it gave birth to an entire sub-genre of movies that bear its name, in which cars break down at ominous manor-houses on rainy nights. The reverberations of The Old Dark House can be felt in unexpected places, perhaps most notably being sent up in The Rocky Horror Picture Show, but also showing up in films as unlikely as, say, Tobe Hooper’s Texas Chainsaw Massacre.

Adapted from the novel Benighted by J.B. Priestley, which is also fantastic, though sadly hard to find, the movie follows the novel pretty closely, diverging principally in the ending, which is (as is traditional) quite a bit happier on film than it is on paper. It was also remade by William Castle in 1963, though that version bears pretty much zero similarity to the 1932 original, once you get past the most basic “rainy night/house full of weirdos” setup.

Without any of the monsters or mad scientists of Frankenstein or The Invisible Man, and with a more limited palette of sets, The Old Dark House has to make up its discrepancy in atmosphere and in stunning performances. Fortunately, it handles both with aplomb. Boris Karloff actually gets the shortest shrift, playing a mute, drunken butler who gets to do little more than provide some of the film’s abundant menace. (Though his character did supposedly inspire Charles Addams’ creation of “Lurch” from The Addams Family.) Faring better are genre stalwarts like Charles Laughton and Gloria Stuart, the ravishing Lilian Bond, and pretty much everyone playing any member of the deranged Femme family. Ernest Thesiger (best known as Dr. Pretorius in The Bride of Frankenstein) is especially good, and steals absolutely every scene he’s in, just as he always does.

Sadly, The Old Dark House didn’t do very well theatrically when it was first released. It was shelved shortly thereafter and was thought to be a lost film for decades before a negative was discovered and restored by Curtis Harrington (director of, along with many better-known movies, the ridiculous TV movie, Devil Dog: The Hound of Hell, which I remember from my misspent youth). It’s a good thing, too, because I really can’t imagine a world in which this fantastic film isn’t available on DVD, and wouldn’t want to if I could.

That’s it for tonight’s program, but join us next time when we head to the North Pole, where some scientists have dug up something a lot more sinister than Santa Clauss.