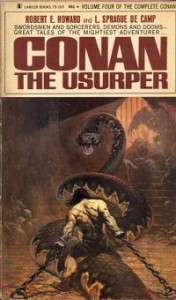 H.P. Lovecraft is often touted as one of the Big Three of Weird Tales, along with Robert E. Howard and Clark Ashton Smith. He was so well-liked by J.C. Henneberger that he was offered the job as editor of the magazine in 1924. But, despite this affection for Lovecraft and his fiction, HPL received no covers in his 21-year association with WT (“Dagon” (October 1923) to “The Survivor” (July 1954)), unless he was ghosting for someone else such as the May 1924 issue which featured “Imprisoned With the Pharaohs” by Harry Houdini. You can make a case for September 1952, which opens with HPL’s poem “Halloween in a Suburb,” with its Virgil Finlay painting of ghostly shapes, but it has little to do with the poem. More typical is January 1942, which features “The Shadow Over Innsmouth” in big letters, but the cover art shows a woman looking at a ring while a sinister Arab lurks behind her. Certainly not HPL’s fish-frogs. (I like to imagine what A.R. Tilbourne or Lee Brown Coye would have produced for that Innsmouth cover.) So, how did this lack of cover assignments affect Lovecraft success?

To answer that, let’s consider the power of art and Frank Frazetta. His covers for Lancer’s Conan paperbacks almost single-handedly sold Sword & Sorcery to a new generation, that of the 1960s. I feel Frank deserves at least half of the credit for the boom that went from about 1967 to 1977 (along with J.R R. Tolkien’s Lord of the Rings.) Frank’s imagery gave Sword & Sorcery a way to process the 1930s prose of Robert E. Howard, as well as the 1950s editing of L. Sprague de Camp. American Fantasy re-invented itself with Frank’s brush. If you don’t believe me, how many Margaret Brundages have you seen on the side of a van? 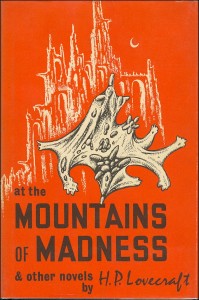 Lovecraft’s success in the 1930s did not have this advantage. Despite a suggestion of epic monsters, his work did not receive any cover interpretation in Weird Tales. Lovecraft had to do it on his words alone. Astounding Stories gave him two covers – “At the Mountains of Madness” (February 1936) and “Shadow Out of Time” (June 1936) – showing shoggoths and the Great Race of Yith in a largely SF style. These were the only images until Arkham House began publishing in the 1940s, where artists such as Richard Taylor and Frank Utpatel – as well as the Pulpsters Virgil Finlay, Lee Brown Coye and Hannes Bok – established new images. It is only in recent decades that artists like Dave Carson, Alan Kozlowski and Tom Sullivan have made careers rendering the Mythos.

The writer who got all the covers at Weird Tales’ was the magazine’s most popular yarn-spinner, Seabury Quinn. I count over forty covers, starting with his second Jules De Grandin story, “The Tenants of Broussac” (December 1925), and continuing until “Kurban” (January 1946). Quinn knew the secret to getting the coveted illustration: Throw in lots of sex, nudity and torture. He got the covers and higher prices from the editors, but what did it do for his reputation after 1954 when all the Pulps died? Quinn is now one of those odd writers that Pulp fans like to collect, but his work has not received much in the way of a revival in mass media. (His Jules DeGrandin stories were finally collected with The Compleat Jules DeGrandin Volumes 1-3 in 2001, but these were specialty items. His non-De Grandin stories continue to show up in anthologies.) He has spawned no sub-genre movements, as Howard did with Sword & Sorcery or HPL with the Mythos. And this isn’t really surprising, since the De Grandin tales fall within a tradition of occult detectives that began in 1871 and continues today in TV shows like Supernatural. 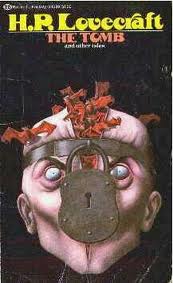 But let’s get back to cover art. While we can see a case “for” (Frank Frazetta) and “against” (H.P. Lovecraft) artwork having an impact, how does it affect the Mythos writer today? Book and magazine covers are the province of editors and art directors. Writers don’t get a say. You may be lucky and get a Michael Whelan painting or you may get something else like John Holmes’ paperbacks of the 1970s. Worse yet, you may get something utterly mediocre like Murray Tinkelman’s pointillist renderings. But fear not, because the likelihood of selling a major Mythos book is not great. (James A. Moore’s Deeper is an exception, not the rule.) More and more authors are turning to another solution: self-publishing through Amazon.com or print-on-demand from CreateSpace or Lulu. Now, all of a sudden, you do have control. You will actually get to decide what your cover looks like! That’s exciting because it allows you to do something that a major publishing won’t be too interested in unless you are already a huge seller, and that is “branding”.

Branding is creating a recognizable look for all your Mythos books, whether they are a short story Kindle or a big, flat novel or collection. You can develop a “look” that automatically tells your readers, “Hey, this is a G.W. Thomas story.” We like to think humans love originality and novelty, but the truth is we are far too busy for that most days. We will expect originality of plot and story in the writing, but the packaging can help a busy buyer to select something “the same but different.” (If this were not true, television would have died out in the 1950s.) There is also a collector’s satisfaction in placing all the books together on a shelf and having them look uniform. Don’t sneer at this. That buyer is not going to leave that collection incomplete when your next volume comes out. It’s all about return customers. 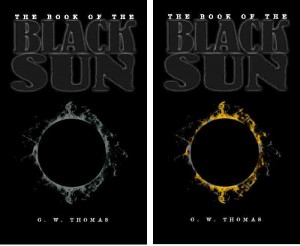 The major tool for branding is, of course, cover art. It needs to be professional-looking. It needs to speak to readers, intrigue them. Typography, color and design are also important. With my own The Book of the Black Sun, series I have chosen to use the same lettering and image over and over, but to change only the color to signal to the reader that this is something new. (These covers were designed by the wonderful M.D. Jackson (http://michaeldeanjackson.blogspot.ca/.) Here are the first two – the original collection and the second forthcoming volume, featuring The Book Collector. A third volume of horror/Science Fiction Mythos called “The Book of the Black Sun: Black Millennium” is under construction and will feature a third color variant. I have a few upcoming novels in this series, too, and they all will feature the same branding.

You don’t have do it the way Lovecraft did it. Play smarter. Most of us won’t get an August Derleth to champion our cause and save us from obscurity. The old adage is: “You can’t judge a book by its cover.” Brand your Mythos epics and prove them wrong.