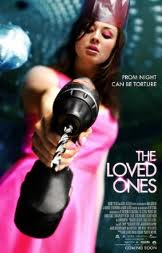 This 2009 Australian, low budget, brutal, sometimes bloody, and very effective horror movie has finally made its way to North America, thanks to Paramount. Was it worth the wait? Did it live up to the critical hype, assuming that you’ve heard anything about it at all?

Yes, yes, it did. But be warned: I can see this movie falling into the category of ‘not for everyone.’ That’s because it quickly becomes very intense, violent, brutal, and dark and stays that way pretty much until the end. Now I don’t hold those attributes against a horror movie. I actually embrace them if the movie has more than just brutality for the sake of brutality. Thankfully, this film also has a twisted story and it is very well-acted, especially by Robin McLeavy as the young psychopathic…but wait, I’m getting ahead of myself. So, let’s do this right and begin at the beginning.

Xavier Samuel plays a high school student named ‘Brent’ who is stalked by the very pretty, but weird, Lola, who is played exceptionally well by Robin McLeavy. It’s prom time and odd Lola asks moody Brent to go to the prom, but Brent already has a girlfriend and so, politely declines. Too bad for him, Lola does not take rejection of any kind well.

Before you know it, Brent is abducted by Lola’s equally demented daddy. The young man wakes up tied to a chair at a table and the whole thing sort of looks right out of The Texas Chainsaw Massacre dinner scene. It’s not quite that wonderfully macabre, but it is a close second. At the intimate dinner party is dear old dad, Lola, who now wants to be called “Princess,” and an older woman devoid of any emotion or personality with a circular scar in the center of her forehead, simply called “Bright Eyes.” Hmm, it seems that Princess is not the only one who has relationship issues.

Brent has been ‘invited’ to this freaky family’s own personal prom night, all done by the doting, and way-too-incestuous, daddy for loopy, and apparently lethal, Lola. So begins a night of hell for Brent and this is where the movie becomes really uncomfortable for some people to watch. It sort of dips into torture porn, as really bad things happen to poor Brent, but things here never really get overly gory. Sure, there’s some blood, but it doesn’t delve into Hostel levels of splatter. Most of the nasty business is done without explicitly showing it. This can actually be worse, as it allows the viewer’s mind to fill in the pictures to the horrible screams and sounds of hammers, knives and power drills all doing their thing.

Perhaps the best thing about this movie, other than Robin McLeavy’s performance (I really can’t say enough good things about that) is how this movie keeps going for it. Just when you think they can’t possibly top what they just did in terms of uneasiness or out and out weirdness, this movie does exactly that. I am loathe to give any surprises away, as these sucker punches do hit hard and are best when you don’t see them coming. I will say that one of my favorite parts is when it becomes all-too-apparent that Brent wasn’t the first love of Lola’s young life.

Sadly, as cool as this movie is, the new DVD release is rather lackluster. First of all, it’s a DVD release from Paramount, which a major movie studio, in 2012, and there is no Blu-ray edition available. Boy, you can really feel the love that they had for this one. Second, there are only three short interviews on here: two with actors Xavier Samuel and Robin McLeavy, and a third with special makeup supervisor Justin Dix. And that’s it; those are all the “special” features to be found here. While not completely bare bones, this DVD is all-but-that and it is a shame. It’s not like Australians don’t speak English, unlike many other forging films, so where are the audio commentary tracks? Man, what a blah release for such a good little movie.

So, should you get this new DVD? Well, yes, as it is the only way to get this very cool, albeit very dark and twisted, movie over here. It should have had a better release with more extras, and considering the dreck that gets the BD treatment, there really should have been a Blu-ray copy of this available. But the movie is quite good and that’s the most important thing. So, consider this a recommendation if you have a taste for the disturbing. It is not an easy watch, but it is, in a truly horrible way, an enjoyable one.