It’s 1873, in the Arizona Territory, and there’s a gold rush going on. Jake Lonergan (Daniel Craig) wakes up in the middle of the 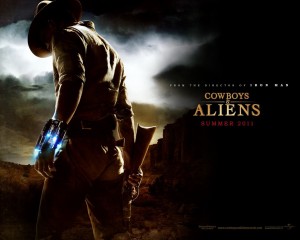 desert, barefoot, hatless and confused – and wearing a weird, steampunkish bracelet on his left wrist. He doesn’t remember a thing, about anything. He does demonstrate a deadly ability to survive when some Indian hunters (complete with fresh Indian scalps on their saddlehorns) surround him and bully him, with the obvious intent to kill him. Lonergan kills them all, instead.

In one fell swoop, he gets water, boots, guns, a horse, a hat, and pretty much all he needs to survive long enough to roll into the next mining town. Once there, he encounters a mysterious woman (Olivia Wilde) who thinks he knows more than he does, hostile townspeople, a suspicious sheriff, and (soon after) a vengeful rancher named “Woodrow Dolarhyde” (Harrison Ford). Seems Jake runs a gang of robbers and heisted some of Dolarhyde’s gold, as well as beating the crap out of Dolarhyde’s spoiled son (Paul Dano) earlier in the day. Dolarhyde, a grim old Indian fighter who commanded troops during the Civil War, doesn’t take kindly to either indiscretion and wants Jake’s head on a plate.

All this quickly becomes immaterial when alien ships attack the small town in fire and thunder, kidnapping a large portion of the townsfolk. The only thing that stops them from burning the town to scorched dirt is Lonergan’s bracelet, which he suddenly discovers can shoot laser beams when he’s under threat. He takes down one of the ships, stopping the raid.

The two enemies reluctantly call a truce and form a posse to rescue their abducted friends and kinfolk. But it’s not until Jake’s gang and a group of mystical Indians join the pack that the humans have a prayer of even finding the aliens, let alone retrieving their loved ones. And with Jake and his mysterious bracelet their only known ace in the hole, that may still not be enough.

From the above, it’s fairly obvious that you’ve seen the western and sci-fi elements of this story a million times before. So, let me reassure you: This is a fun ride of a movie that passed my clock-watching test (With most films, I start looking at my watch about twenty minutes in. Didn’t look once during Cowboys & Aliens). It’s well-acted and well-paced. In addition, for you horror buffs, the direction and set design inject a surprising amount of creepy darkness into the story, especially in the third act. This is not a kid’s movie, which may be why it didn’t do very well at box office. But if you’re an adult, and you’re looking for an entertaining summer blockbuster, you’re going to have a good time.

Also of note are the performances, especially Craig and Ford’s. Everybody could have sleepwalked their way to a quick paycheck in this one, but instead, they all look like they’re having a blast. It’s infectious. Craig and Ford, in particular, channel Eastwood and Wayne, respectively, on their way to their own unique takes on the western. These two can get back in the saddle again any time, as far as I’m concerned. I’ll watch. In addition, Wilde as Ella Swenson does a spirited take on a Woman with No Name, with a mysterious agenda.

Sadly, this film misses greatness due to the writing. As I said, the film is well-paced and main plot points all come together in the end, 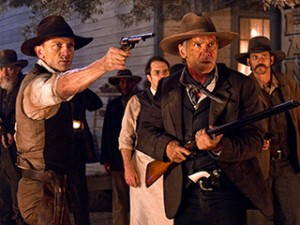 so the writers had the act structure down. But it really shows its graphic novel roots in the cliched characters and situations, and convenient plot turns. Of the eight writers on the script (not counting the original author of the comic and whoever didn’t get a credit for script-polishing), not one thought to dig into these characters and Old West history, and come up with something more original than a mash-up of The Searchers and Independence Day. Jeez, it’s not as if it’s the first film to put the two genres together (Scifi Channel’s High Plains Invaders predates it by two years and I understand there are even earlier ones).

So, you get things like the aliens acting very alien in the first half then suddenly getting human motivations in the third act that Make No Sense. If I’m nocturnal and I’ve got a bracelet that shoots laser blasts, I’m not going to risk myself by getting into fighting up close and personal in the middle of the day, even if I am superstrong, superfast, have hideously long claws, and look scary as hell. It’s too bad, because there are some interesting (and spoilery) parallels between the aliens and the cowboys, especially Lonergan and his gold, that the cowboys do not appreciate, but they’re sabotaged by the shallow writing.

It doesn’t help that you can easily predict who will live and die (often along ethnic lines). The most annoying part is a promising storyline between Dolarhyde and his Indian foreman, Nat Colorado (Adam Beach), who views him as a foster father, that ends pretty much the way it would have half a century ago. My God, folks. It’s 2011 not 1955. The ethnic characters can get happy endings, sometimes, too.

That said, this is still an entertaining flick. With a title like “Cowboys & Aliens“, the film obviously wasn’t aiming much above the popcorn line. Even so, it does its job with verve and efficiency and a minimum of incoherence (For comparison, look at something like Wild, Wild West (1999) or Jonah Hex (2010)…yeah). In this case, “It could have been so much worse” is definitely a compliment. If you’re a fan of Craig or Ford, or you think the title sounds like fun, this one’s up your alley.

Cowboys & Aliens is currently out in theatres.