This score represents one heartfelt, profoundly moving excursion into the realm of sword and sorcery film music. This score is fondly 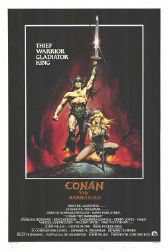 remembered by many fans. Fans that have left well-thought-out reviews on IMDB and numerous comments of gushing praise for favored cues on YouTube as they’ve trudged through cyberspace. I was very pleased to see that composer Basil Poledouris got a chance to conduct a live performance of Conan‘s score with the Andalusian Philharmonic Orchestra at the Umbeda Music festival in July of 2006. Poledouris died, unfortunately, only a few months after this concert, so this concert is a one-of-a-kind sight to see if you’re a Conan fan, a Poledouris fan, or a listener wanting to hear the beauty that film music can achieve.

“The Anvil of Crom”: This opening cue has some of the brutal Iron Age sound of the 2001 Planet of the Apes soundtrack. Conan’s overture is more melodic, though. The live Andalusian concert version of this piece is more powerful to me than the soundtrack version because the percussion sounds rawer. I recommend watching the live version here.

“Riddle of Steel/Riders of Doom”: This cue elicits the mood of a riddle with its spiraling strings. When a cue can sound circular in its musical rounds, it can be much like descending down into a cavern. This cue creates that mood.

“The Gift of Fury”: It’s not common to think of fury as a gift. Anger is supposed to indicate weakness and sometimes vulnerability. This track has a vulnerable sound to it. It sounds hymnal. Pretty and ambient, the cue isn’t anything like its name.

“Wheel of Pain”: This is an ornate piece.

“Atlantean Sword”: Slower than most of the previous cues, it’s bittersweet. Conan’s Hyborian Age is supposed to take place after the sinking of Atlantis, so this cue has a job of evoking the feel of a mythical place that has been lost to the ages.

“Theology/Civilization”: This cue makes use of gentle percussion. Not something I was expecting to hear, but I’m glad it’s here. The woodwinds and brass are also played rather gently. This music embraces the idea of theology giving solace to the more barbarous aspects of Conan’s world.

“Wifeing/Love theme”: The strings are so mournful in this piece. For a love theme, to me, it seemed rather depressing. I didn’t consider it romantic-sounding like Jerry Goldsmith’s family theme in the first Omen film.

“The Leaving/The Search”: This piece is a continuation of the slower, somber sound of the previous cue. It does pick up in emotive power about two minutes into it.

“Mountain of Power Procession”: A return to the harsh Iron Age sound of the first cue, but the instrumentation is very orderly and formal. It could accompany a Tudor-themed film just as easily as a Hyborian-themed one.

“The Tree of Woe”: Those wind-chime effects at 1:44 are just plain creepy. Otherwise, the piece isn’t all that morose and reminds me a bit of Enya’s “Bard Dance” from her soundtrack The Celts. They’re similar in mood, not melody.

“Recovery”: This cue is a good showcase for the gentle side of brass music. The brass is counterbalanced with some choral vocals.

“Funeral Pyre”: An appropriately pensive musical accentuation of a very sad part of the film. It’s music like this that washes the emotion of a film onto the viewer like a tidal wave.

“Battle of the Mounds”: The percussion at 1:25 is the highlight for me.

“Death of Rexor”: This harsh music returns to what I consider the “Tudor” type sound of “Mountain of Power.”

“Orphans of Doom/The Awakening”: This is an operatically-wrenching cue. I think operatic film scores toughen a listener’s heart and build all the right mind muscles.

Conan the Barbarian‘s soundtrack is available at Amazon.com.