So, some of you are probably saying, Hey, I’d read sword and sorcery set in Africa, I really would. I loved Solomon Kane and King 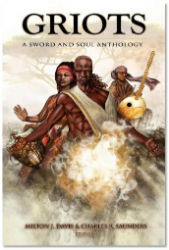 Solomon’s Mines, you know? But there’s nothing out there and who are Charles Saunders and Milton Davis, anyway? Aren’t they some of those depressing, angry PC guys? I want me some fun adventure stuff.

Well, you, you’re in luck, because Griots is a collection of rousing sword and sorcery set – most of it – in Africa. And it’s got a cool cover, too. Yeah, there are essays in there, but they exist mainly to explain who the editors are and why they’re setting an entire anthology of S&S in the “Dark” Continent. The rest is pure adventure. When you’re done with it, you can check out the editors’ other sword and sorcery tales at MVmedia, LLC.

On the one hand, I’d argue there’s a risk to distancing oneself from Howard under the perception that he is responsible for the extreme trend toward the medieval and European in sword and sorcery (I think T.H. White and Tolkien should be taking a lot of that blame). Howard’s most famous characters (Conan, Kull) tend to be set in the Upper Paleolithic/Mesolithic or Iron Age (the Pictish king Bran Mak Morn) or Reformation Era (Solomon Kane) and may originate in West Asia (The Cimmerians were driven out of the Caucasus into what is now Anatolia almost three thousand years ago) or even operate in Africa (Kane). Medieval they’re not.

I also think there’s a risk to writing and reading sword and sorcery stories set in Africa in isolation from the rest of other sword and sorcery (and that said risk shows in this anthology). Africa is a huge and varied continent that should be considered one of the main ports of call for S&S, not an exotic destination used by only a few.

On the other hand, Saunders’ main point that Howard’s racism, though not unusual for his day, both is uncomfortable to read and has also gone largely unquestioned in the genre he founded, is an excellent one. In fact, I’d take it one step farther and say that a lot of things in Howard’s work that should have been left behind as society moved on after his death were instead ingrained in the genre by later, lesser writers. It’s long past time we had the same rigorous discussion about race and exoticism in later imitators of Howard that we’ve had about the devolution of tough female characters like Red Sonya of Rogatino into s&m Barbie dolls like Red Sonja.

Davis gets us started down that road in his article, “A Gathering at the Meeting Tree.” In discussing how he found Saunders’ work and came to write his own series, Meji, Davis asks the obvious and most-unasked question about the sword and sorcery genre – Where are all the stories set in Africa? It’s such an obvious setting, full of violence and adventure, colorfully imagined societies, a long and storied history, even unusual wildlife. There is simply no reason not to set stories fully in that world instead of always making them the inaccurately realized background for some Random White Guy wandering around Yet Another Exotic Setting killing savage and treacherous Other characters.

Davis puts his money where his mouth is in the very first story, “Mrembo Aliyenaswa (Captured Beauty).” Set in a decidedly pre-European Mombasa, the story follows Changa, a young merchant/mercenary, as he tries to rescue the beauty of the title. She is unfortunately a bit on the passive side, nor does the story offer much in the way of innovation aside from the details of African society here and there, so I can’t say this is my favorite of the stories. Still, it’s a rousing Arabian Nights-style adventure that starts off firmly within the boundaries of the anthology.

The heroine of Valjeanne Jeffers’ “Awakening” is not nearly so passive. This story begins with another familiar trope, that of the rebellious tomboy princess who sneaks out for an adventure. But Nandi is an engaging heroine and there’s an interesting shamanic twist partway through that evokes ancient African religions.

Maurice Broaddus’ “Lost Son” is set in ancient Ghana (The Egyptian Pharaoh is also mentioned at one point), when it was a kingdom of gold. A griot – professional storyteller – relates the historical tale of Ghana’s past glories. The story-within-a-story frame is a bit distancing, but it does do a good job of evoking traditional African works like The Epic of Son-Jara.

In “In the Wake of Mist” by Kirk A. Johnson, an East African chieftain’s son, Sangara, encounters a Grendel-like figure deep in a cave while trying to aid his father in battle. Will he make it out alive? Or is there more to his trials than first appears? This one had echoes of sources as varied as The Thousand and One Nights, The Odyssey and Arthurian Grail sagas.

P. Djeli Clark’s “Skin Magic” begins with thieves and cats. It’s hard at first to say who Makami is or why he’s being stalked through a small town by mercenaries. It’s not until they catch him and become too curious about a certain tattoo on his chest that they – and we – find out. The answer is more than a little bit Mythos. And that’s only the beginning.

“The Demon in the Wall” by Stafford L. Battle begins with an abandoned caravan. The mystery deepens when two members of the caravan return to find their companions gone, the animals and goods left untouched and unharmed. It will take a battle of wills between two sorceresses to set things right.

Minister Faust takes on the ancient Egyptian myth of Osiris – from the viewpoint of his fratricidal brother Seth – in “The Belly of the Crocodile.” Fault doesn’t mention those names in this profane and colorful rendition, but the last page makes it very clear what myth we’re meant to read into it.

In “Changeling,” Carole McDonnell tells the story of the ugly duckling princess, Iyoke. Iyoke’s nature is as beautiful and kind as her body is fat and ugly. But she has two sisters of a different nature. Disaster of a King Lear style awaits.

“The General’s Daughter” by Anthony Nana Kwamu lays out a distinct historical setting on the first page – medieval Abyssinia – though there’s also a strong biblical feeling throughout, particularly of Ezekiel. A mighty general loses his daughter and a wizard offers to get her back from the realm of death – but what will be the price?

In “Sekadi’s Koan,” Geoffrey Thorne introduces us to a swordswoman in training. Young Sekadi is bested and nearly killed on the first page during a monastic sparring session. She wants revenge. But she has to learn a few things on the way that may change her mind.

The title pretty much sums up the plot in “The Queen, the Demon, and the Mercenary” by Ronald T. Jones, but that doesn’t stop it from being a rousing adventure along Howardian lines.

Rebecca McFarland Kyle’s “Icewitch” is set in the far north, among a Norse-like people. Dark-skinned Ashlan is the product of rape, yet still his mother’s favorite. When his beloved younger brother is kidnapped by the Icewitch of the title, he sets out to rescue him.

Melvin Carter’s “The Leopard Walks Alone” is set in 12th century Spain. Into this fraught situation strides the African warrior, Sumunguru. No one can withstand his blade. But that doesn’t stop his becoming a pawn between a sorceress and her brother.

Saunders wraps up the anthology with “The Three-Faced One.” The setting is the fictional continent of Nyumbani, but appears to be based on the Rift Valley in East Africa. A nameless warrior must navigate a land riddled with volcanoes, teeming with game, and full of treacherous men. We slip into classic spaghetti western territory when he comes across a tribe that desperately needs his help…and he reluctantly provides it. After a while, we learn the stranger’s name. It will be familiar to anyone who has read Saunders’ novels.

This anthology, like many anthologies that are on the cutting edge of a new subgenre, felt a bit uneven to me. Some of these stories felt as if they were standard D&D sword and sorcery tales with some characters whose skin just happened to be dark, while the number of strong female characters, not to mention characters with no noble pedigree, was rather small. That said, I’m not minding a bit that the anthology’s Facebook page is advertising a sequel focusing on women.

I felt this most notably in “Changeling,” which started off well and had a mythic quality to it. But, ultimately, it felt more derivative of what’s already out there than saying something new. These characters could as easily have been white as black, and the story would have played out the same way. Yay for that, I suppose, but it still felt as though the culture being depicted was white and European, with European values, even though the characters were mostly nonwhite. For example, Iyoke is disliked, in part, because she is fat, but African societies (unlike modern Western societies) generally regard being fat as highly attractive because it indicates good health and great wealth. So, why the hate?

There’s a similarly stale feel to “Mrembo Aliyenaswa (Captured Beauty),” which doesn’t take advantage of its setting to do more than use it as wallpaper for a predictable plot. And I was surprised at the number of stories that weren’t really set in Africa, or any fantasy world like Africa.

Other stories transcend these issues. “Icewitch” starts off feeling a lot like Howard’s “The Frost-Giant’s Daughter” and Norse sagas, while making me wonder what it was doing in an anthology about African sword and sorcery. But there’s a lot more to the story’s hero than his being an outcast for his skin and origins, or his rather masochistic fraternal devotion to his favored white brother. He evolves far beyond the sum of his parts.

I also don’t think it’s a bad thing that the excuse for some of these tales is simply balls-out adventure. “The Three Faced One” may have more on its mind (Saunders, like Howard, goes for more layers than the surface) , but “The Leopard Walks Alone” and “The Demon in the Wall” are unabashed pulp fun. “Skin Magic” gets decidedly Lovecraftian while taking great advantage of its African setting. But I think my favorite is “The Belly of the Crocodile.” It puts us in Seth’s shoes, shows us his fratricidal hatred, makes us sympathize with him a little bit – and then end up hating him all the more. That’s impressive.

You can buy Griots from Amazon or directly from the publisher.