Should a Mythos author write Lovecraftian pastiches? Is the Mythos anything, really, but a colossal pastiche of Lovecraft? Is the

Mythos’ value lessened by its collective nature? These are big questions and very important ones for anyone who wants to write Mythos.

The word ‘pastiche’ comes from the Italian pasticcio – “piecrust,” or, more literally, “composed of paste.” It has two meanings in literature: a jumbled collection of something or something made in imitation of another. For instance, Horace Walpole used the term in 1752 to describe a hodgepodge of songs. I think this is appropriate because Walpole created a pastiche of a German castle in his home Strawberry Hill, in which turrets and such were made of paper and paste. He also got the Gothic ball rolling with the Castle of Otranto (1864), a novel that was fiercely pastiched for decades, inspiring our modern horror field.

The pastiche has been a feature of the Mythos from early on. The very first Mythos pastiche is a little hard to pinpoint because of the nature of the Lovecraft Circle’s activities, with authors sharing books, monsters and background details. A Robert E. Howard story like “The Thing On the Roof” (Weird Tales, February 1932) strikes me as almost a pastiche of Lovecraft, but not quite. You could make a case for Robert Bloch’s “The Secret in the Tomb” (Weird Tales, May 1935), his first imitative story in Lovecraft’s shadow, but Bloch was young and still figuring out the business of writing. Lovecraft himself began by pastiching Lord Dunsany and Poe, after all.

My vote for the first true pastiche goes to the post-humorous collaborations between Derleth and Lovecraft. Stories like “The Sandwin Compact” (Weird Tales, November 1940) consciously try to imitate Lovecraft’s style, his sentence structure, trying to pass as unfinished works by HPL when they are 99.9% Derleth. These tales have been reviled by many and they are not my favorite Mythos pieces, but they did serve to keep Lovecraft’s flame burning in the 1940s and 1950s.

Fritz Leiber Jr. (1910-1992) is an acknowledged master of fantasy and horror, and was a correspondent of HPL’s in his final year. Later, he was one of the first critics to champion Lovecraft’s work. Despite writing horror classics like “The Hound” and “Smoke Ghost,” literally dragging the Gothic tale out of the castles and into the mean streets, he never wrote any Mythos stories in his Pulp days. These early stories were eventually collected in the Arkham House volume, Night’s Dark Agents (1947).

Leiber was aware of the game Lovecraft and his friends played in their stories, but he never chose to participate. According to an interview with Darrell Schweitzer in Amazing Stories from September 1976 (an interview that occurred during the very first Necronomicon in HPL’s honor in Providence, RI), he said, “You know, for many years after Lovecraft’s death, I never would write a Cthulhu Mythos story. I had a feeling that this is just a sort of dead end, blind alley of writing, and I wanted to have no part in it. I finally went so far as to write ‘The Black Gondolier’ in which I used, I think, Lovecraft’s method of story construction, but of course I made no reference to the Cthulhu Mythos or any of the names and place names and entity names in Lovecraft’s writing.”

What changed Leiber’s mind was a negative review he had written of Brian Lumley’s The Burrowers Beneath (1974): “I began to think, well, I’m a pretty weak character if I criticize something I haven’t done myself. So I got tempted….” That temptation led to Leiber writing “The Terror from the Depths” for Edward P. Berglund’s The Disciples of Cthulhu (DAW, 1976). In it, he tells the story of a California sensitive and poet named ‘Georg Reuter Fischer,’ who corresponds with Albert Wilmarth (a character from Lovecraft’s “The Whisperer in Darkness”) at the Miskatonic University. Eventually, Wilmarth shows up and convinces Fischer that all the weird visions and ideas he has been having are real. Upon the notification of Lovecraft’s death, the two men attempt a sleep-inducing drug that ends in Wilmarth fleeing into the night on the verge of insanity and Fischer grabbing a sledgehammer. He plans to knock in his basement floor and see the tunnels beneath his house. The next day, he is found dead, his face chewed off.

My impressions of the story are mixed. On the negative side: The story is very slow to start. It does get going after Wilmarth shows up, but the ending happens off-stage and is remote. Leiber masterfully imitates Lovecraft, perhaps better than anyone else has ever done, but the cumulative effect seems less effective than Leiber’s usual style.

On the plus side (and there is a lot of plus side, since Leiber is such a brilliant writer), he has fun with all the Lovecraftian in-jokes. The character’s name contains his own middle name and the last name of Leiber’s life-long friend Otto Fischer, who created Fafhrd and Grey Mouser with him. There is a brief inclusion of Leiber himself when Wilmarth fails to see one of Lovecraft’s new correspondents in the Midwest because of a flood. Leiber also manages to mention or tie in just about every character from the original Lovecraft stories, along with Weird Tales and Lovecraft himself. In so doing, ironically, he creates the idea of the “Miskatonic Experiment,” a group of investigators working out of Arkham. The irony here is that the book by Lumley that he reviewed so harshly uses this same idea. Almost in apology, Leiber offers up a possible beginning for Lumley’s crew. Another nice touch includes Leiber’s choice of California for the story’s setting. Having settled in the West, Leiber wrote a number of works that feature California in some way.

The final decision: If you have to read a Lovecraft pastiche, this is the one. Fritz Leiber delivers all the expected features, managing a 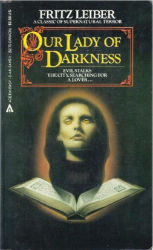 small chill, and the whole package comes off like a love letter to the old days of Weird Tales, Lovecraft and the late 1930s. “The Terror from the Depths” is scarier than all of Derleth’s efforts combined. The other benefit of this story is that Leiber does the job so well there isn’t any reason for anyone else to attempt it. I don’t really enjoy other people writing in HPL’s laborious style. ( I had the same reaction to Basil Copper’s The Great White Space (1975) and “The Knocker at the Portico” (Dark Things, 1971). The self-conscious artifice of it pulls me out of the story, making it hard to slog on. This was the reaction I had to fight as I read Leiber’s tale, despite his way with words. Only when I was able to work past the imitation did I begin to enjoy the tale.

Pastiches are part of literature, not just the Mythos. Solar Pons and Sherlock Holmes, Otis Adelbert Kline and Edgar Rice Burroughs, Terry Brooks and J.R.R. Tolkien, Lin Carter and Robert E. Howard. The great writers all have imitators, but I prefer the originals. I am glad that Fritz Leiber just wrote the one pastiche. (He also did one for Tarzan and the Valley of Gold, but, hey, that was work-for-hire.) I much prefer his Our Lady of Darkness (1977), which is Lovecraftian in nature but not execution. Perhaps the experience of writing “The Terror from the Depths” helped him with that book, which features Clark Ashton Smith in its background. I like to think so.

And so, we get to the rub, my fellow Mythosians. What do you do as a Mythos writer? Do you write imitations for a while then evolve away like Ramsey Campbell or Robert Bloch? Do you mine it heavily like Brian Lumley, or just try it once or twice like Fritz Leiber, Manly Wade Wellman (“The Terrible Parchment”), or Colin Wilson (The Philosopher’s Stone)? Or, as a third alternative, and obviously the one I am proposing, you can use the Mythos as a springboard and find your own crazy niche within it, as Wilum Pugmire has done, or Thomas Ligotti, or as I hope I have done with my Book Collector stories. Some people may criticize you for not being “canon” or taking things in a direction that they dislike, but the alternative is being a photocopier. You can choose to deliver what has been done before, or you can find some new way to explore that frightening cosmic terror HPL created. Who knows? In a few years, you may even be the one they are pastiching.