Sword and Planet. What is it? Well, originally, it was just science fiction. Or adventure. Or Weird fiction. But with swords. And barbarians, alien cultures, and maybe a touch of what we’d now call steampunk. 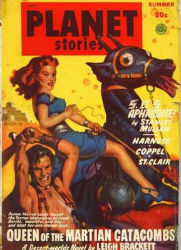 Planet. Poul Anderson’s swashbuckling Flandry, the James Bond of a stellar empire on the edge of decline, can sometimes be found in this subgenre. Lovecraft didn’t write it, but, just as there are Lovecraft-period Mythos Sword and Sorcery stories (Robert Howard’s “Queen of the Black Coast” (1934) being the ur-tale here), you’ve also got some Sword-and-Planet Mythos.

C.L. Moore’s “Jirel Meets Magic” (1935) has the doughty title character, the Countess Jirel of Joiry, leaving late-medievalesque France through a portal in a fallen castle in pursuit of a treacherous sorcerer. It is remarkably progressive in its two strong female antagonists, using the secondary male antagonist as a pawn between them. It’s also nice to see female anger treated as a strength in the heroine and not a weakness. None of that submissive Little Women crap for Jirel, nuh-uh. Now that’s a woman who will use your intestines for yarn should you make the error of suggesting she go back to her knitting.

“Jirel Meets Magic” does mostly Sword and Planet (disguised as medievalesque alternate-world fantasy along the lines of Andre Norton’s “Witchworld” series) and only delves briefly into Mythos near the end. A later Jirel story, “The Dark Land” (1936), goes straight-up Mythos and has Jirel get involved with a Prince Charming type who turns out to be a bit more like Nyarlathotep. I didn’t like that one as much, though, because Jirel is uncharacteristically passive in it.

It would be easy to say that Sword and Planet is any space setting with fantasy (or what we’d now characterize as fantasy because its science is outdated), but that’s not true. There is a distinct difference between the Mars of Edgar Rice Burroughs’ “A Princess of Mars” (1917) or Leigh Brackett’s Stark series and that of Ray Bradbury’s The Martian Chronicles (1950) that is based in the basics of their respective genres. Sword and Planet is set in a sort of historical version of Space Opera. People may have rayguns, but they prefer swords. There are sorceries, or at least religious mysticism. The heroes and heroines are violent adventurers interacting with civilization (one usually based on the Roman Empire, Egypt, or Bronze Age Mesopotamia). The genre being referenced is Sword and Sorcery, or at least something like Historical Fantasy. And there are many different intelligent races, rather than a binary conflict between would-be conquerors and soon-to-be-conquered.

In The Martian Chronicles, the setting is modern and the basic genre referenced is the Western not Historical Fantasy. The Martians could be the Calusa of Florida – fierce, highly cultured, secretive, and doomed. Robert Silverberg’s ancient Martian civilization in “A Rose for Ecclesiastes” (1963) evokes the Far East by way of Egypt, but it’s a similar thing to Bradbury. The fantastical canals of Mars can be used to evoke different genres.

Sword and Planet has its good points. The protagonists have room to breathe into more than two dimensions and be quite close to anti-heroes at times (Howard’s original Conan is an unabashed thief, pirate and mercenary – and smart about it, too). Jirel of Joiry has no compunction about killing her way across the new purple land she finds in “Jirel Meets Magic,” just because she first meets the sorceress Jarisme while Jarisme is torturing one of her subjects – and because Jarisme is protecting a sorcerer whom Jirel has sworn to kill. So, Jirel’s main reason for taking on an opponent twice her size is (as is usual for her) simply that said opponent pissed her off. 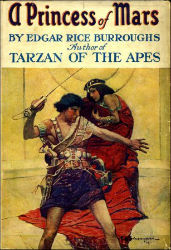 Mary Sue likes to indulge in a lot of hurt/comfort.

This isn’t necessarily a bad thing. C.J. Cherryh’s Gates series is loaded with damage for its male narrator and it’s still great. Andre Norton practically made a career of popular Mary-Sue-laced Sword and Planet aimed at the moody, misunderstood teenager. Even Heinlein romped through the subgenre in his novel Glory Road.

But the constant sexually charged torture endured by the heroine, Alys, in Jo Clayton’s Diadem series gets really uncomfortable, especially when it’s reinforced by almost every female character Alys meets unfairly accusing her of being a red-haired hussy who steals their rather dim-witted and brutal menfolk. Similarly, while Marion Zimmer Bradley delved into feminism later in her Darkover series, making it initially a Scottish-medievalesque, misogynistic world meant that she was always somewhat limited in what her heroines could realistically accomplish.

That’s not even getting into the race stuff, which can be pretty uncomfortable. Yes, I am thinking of John Carter’s florid Civil War backstory, the happy robot slaves of Star Wars, and the Yellow Peril paranoia embodied in Flash Gordon‘s Ming the Merciless, among other historical embarrassments. Let’s not go there.

But Sword and Planet revels in its warts. It’s not about the hard science, never has been. It’s about pushing the exoticism of its worldbuilding, and even characters, to the limits of space – like Norton’s ancient multilayered cities that are products of a hundred centuries of building, a setting that readily lends itself to Mythos. When you write Sword and Planet, you shouldn’t hold back for fear that it’s not scientifically realistic. This is the realm of the technosorcerer, the vacuum-immune barbarian, and the ringed Saturn or dying red giant in your planet’s sky. Go for it.