“and men loved darkness
rather than light”
(John: III, 19)

In the ancient Irish Celtic tradition, Beltane and Samhain are celebrated, two important holidays that mark the change from the solar season to the shadow season. Beltane is on the 1st of May and shows the beginning of the hot summer, while Samhain is on the 1st of November when the Celtic New Year is celebrated with the implacable beginning of the cold winter, when harvests stop and the cattle is taken back to its shed. Celtic people believed that in the intermediate period between the end of summer and the beginning of winter was a passage phase, during which all the barriers with darkness are destroyed. It was a dimension beyond that was able, in this brief moment, to make the spirits of the dead interfere with the living, that made the ghostly vision of the dead possible.

According to the cyclic idea of time ancient Celtic people had, Samhain night is lived as a sort of magical out-of-time door between the material and the spiritual universe. In fact, the classical idea of time disappeared to make room for a non-temporal and Dionysian dimension, which gave play to the unconscious, penetrating reality of the hereafter, with the inevitable consequence of an interior feeling of beyond, “which drives us to look for the truth in the shade, descending into darkness and sounding the deep ego.” (Giuseppe R. Festa)

An ancient legend relates that in this special interval, the souls of the dead go to look for bodies to possess in the New Year. In order to scare the undesired and intrusive evil spirits, grotesque masks made up of animal skins were dressed with a macabre ritual. This interval is just on the night of October the 31st, close to Samhain. Such a name may mean the “end of summer” because sam means summer and hain means sunset, or it may have originated from the name “Samonios,” showing the month representing an interval between October and November.

On that night, Dionysius gets a foothold. In fact, it is celebrated with songs and dances dedicated to the gods in charge of protecting people during the freezing winter. In Scotland, young people wander about the borders of the farms, holding torches to avert the negative influences of heavenly evil forces and to keep fairies away. An important Druidic ritual consisted of putting out the Sacred Fire and then, at sunrise, lighting the New Year Fire, which represents the source of a new seasonal cycle – with the highest quality firewood, according to Celtic culture. By means of torches lighted by the new fire, families stir their hearths up again.

With the advent of Christianity, these pagan holidays of a Dionysian type – as they were connected to night dances, hearths, masks, and fertility rituals – were inevitably unpopular and firmly suppressed. Also, the shaman god Cernunnos’ horns, and mystic and sexual appearance, in Celtic mythology recalled the Devil (as happened to the Greek god Pan, too).

Consequently, Pope Gregory III moved All Saints’ Day from the 13th of May to the 1st of November. But, as this initiative did not manage to uproot paganism, the Church instituted All Souls’ Day on the 2nd of November. This is a holiday dedicated to the memory of the dead and prayers, so as to communicate with the world of the dead, as happens during pagan holidays.

Christianity did not eliminate Samhain, but moved it to the Christian world. As Paolo Gulisano and Brid O’Neil write in The Pumpkins’ Night, the “candles lit on the graves of friends and relatives illuminate the graveyards. The lanterns hanging at the windows rekindle the houses and the fires warm up the cold bones.” In fact, during All Saints’ Night, “the Irish graveyards are disseminated with grave lights, as if to continue the Celtic tradition of Samhain when the dead mingle with the living.”

More than “continuing” the celebration, it is exactly about adapting this anniversary to Catholic mores. “As it cannot uproot the day, whatever it is, Christianity in general made an effort to channel it and provide it with a purpose in accordance with [Christianity’s] basic tenets.” We should not forget that in this process of repressive Christian absorption, pagan tendency aimed at finding its own balance with nature and its relationship with the divine was lost or, better, was abolished.

We can state, then, that:

A direct evidence of the Christian influence comes from the development of the holiday’s name, exactly as it occurred with the old term, “All Hallows’ Eve,” where Hallow means Saint or Sacred, and Eve occurrs the day before All Saints’, which is exactly on the 31st of October. 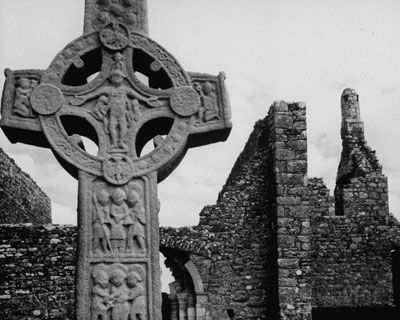 Following a severe famine during the second half of the 19th century, many of the Irish emigrated to the United States of America, where they exported their Halloween traditions. This time, in remembrance of Jack O’ Lantern, the popular orange pumpkins were used, as the originally used turnips were rare and small in the new land. The pumpkin, emptied and carved in such a way as to represent a Mephistophelian face and lighted inside by a candle, became the symbol par excellence of the day or the night of the witches.

The legend of Jack O’ Lantern tells of a mean and alcoholic ill-famed blacksmith who manages to cheat the Devil but at his own expense. Probably during Halloween night, Jack, dead drunk, meets the Devil in a pub. Before giving his soul to the Devil, the blacksmith asks, as a last wish, for another and final drink. The Devil accepts and changes himself into a coin to pay for the drink, but the shrewd blacksmith grabs the coin and shoves it into his wallet, where a cross-shaped catch paralyzes the Devil transformed into a coin.

Jack agrees to free the Devil under one condition: He should let him live for at least ten years. The Devil accepts. After this period, the Devil reappears to have Jack’s soul back, but Jack traps the Devil again and the Devil agrees to leave him alone. When Jack dies, he is not accepted either into Paradise (because of his bad behavior) or into Hell, where the Devil refuses his admission. Luckily, the Devil gives Jack a piece of coal to help him find his way in the dark of Limbo. Jack puts the piece of coal into a turnip and it becomes a lantern, which helps him walk as a lost soul until Doomsday. Halloween’s pumpkin thus recalls the occult presence of Jack o’ Lantern wandering on the 31st of October as a foul spirit in the freezing darkness of hell.

Also, the pagan tradition connected to the saying, “Trick or Treat,” has acquired Christian connotations. As the spirits may go back to the places where they once lived on Samhain Day, the front door is left ajar to let the souls in, food is prepared, and the room is kept warm by the fire. Thus, the dead are made welcome and unpleasant surprises by vengeful spirits are avoided.

In the Christian era, things have been similar. In fact, during the Middle Ages on All Souls’ Day, poor Christians visited houses and asked for a sweet in exchange for their prayers to the dead, who had to ascend to Paradise from Purgatory. A sweet that in Britain has the name of “soul cake” makes me think of some “sweetener of the soul,” achieved through prayers. On Halloween Day, the habit of making a cake to avoid annoying the spirits, who might take revenge, has probably been revived by children, who play tricks on those who refuse to give them some sweets. If, in the past, you could run the risk of becoming the victim of ghosts, now you are the victim of masked children who go house to house and say the popular phrase: “Trick or Treat?”

Eventually, also because of secularism and consumerism, the interweaving of Celtic paganism and Christianity was distorted by a new horror paganism made up of Gothic and ghoulish implications stimulated by the commemoration of the dead to celebrate the darkness. Unintentionally, Christianity has created a rich syncretism in favor of a renovated paganism. Disguised as Halloween, this has been resurrected through the combination of new symbols in an original and innovative synthesis of pagan and Christian elements. Devils and witches have been substituted for evil spirits and fairies, within a quizzical holiday of a gloomy and funereal type. In some sense, the more the Celtic tradition has been inhibited by Christianity, the more Halloween has given way to the primeval Dionysian impulse, including drunkenness, dance, mask and darkness. “Dionysius and Hades are the same thing.” (Eraclito)

Samhain, therefore, has regained some of the ground originally lost. However, it has lost its own natural and genuine Celtic identity, free from diabolic content. Halloween, instead, has changed and has been enriched with a carnival folklore. The neo-pagan holiday has absorbed the ominous gothic myths of Christian civilization with its castles, deserted churches, spirits of the dead living again and wearing period clothes, possessed cats, vampires, graveyards, ancient houses, monasteries, werewolves, catacombs, devils from Hell, and gingery witches wandering on a broom in the dark Halloween night, traditionally lighted by a full moon. 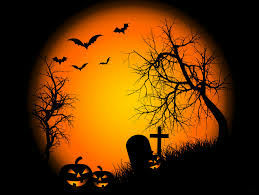