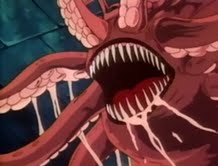 Hello friends. Today, I thought I’d take a break from the big screen, and instead focus on the infamous (blind) idiot (god) box and those eerie episodes that dare to bring the forbidden knowledge of the Cthulhu Mythos to the masses. As if that were not nefarious enough, such shows seem to go out of their way to entice future generations through the use of darkly demented doodles. I’m talking about the work of H.P. Lovecraft popping up, not only on your television, but in abominably adorable animated form. Yes, boys and girls, let’s take a look at one of those Cthulhu cartoons for the kiddies.

The Real Ghostbusters – “The Collect Call of Cathulhu” – 1987

After the movie mega hit in 1984, there was not one but two cartoons called “Ghostbusters.” This is the good, non-ape-wearing-a-hat-one. You know: the one with “Real” in the title and the actual characters from the Ghostbusters movie. Although, why Dr. Egon Spengler spots a bleached blond hairdo here is anyone’s guess. For those interested in seeing an entertaining and informative video on why there were two Ghostbusters cartoons on at the same time, check out this video.

I loved this show as a kid. It was well-drawn for an 80s TV cartoon, often very funny, and, while not at all scary, it did have some very cool monsters of the week. And boy-howdy, none were more cool than the dread lord of R’lyeh itself: Cthulhu. Of course, at the time I first saw this, I was too young to know who or what a ‘Cthulhu’ was, but I remember still liking the episode a bunch. It wasn’t until years later, when I was well-versed in Lovecraftiana, that I learned how surprisingly faithful to the source material this cartoon was.

In the episode called “The Collect Call of Cathulhu,” a cult worshiping the titular Great Old One steals a copy of the Necronomicon, which was on loan to the New York Public Library from a little town called “Arkham.” The professors who were stupid enough to put the book on display (Ted Kline and Clark Ashton) hire the Ghostbusters to get the dread tome back before the cult can use it one a special night to summon Mighty Cthulhu from beneath the waves. Standing against our plucky heroes is a gaggle of roughly human-sized Spawn of Cthulhu (who look just like their big daddy), a very cool-looking interpretation of a shoggoth, the octopus-masked human cult, and yes, even Great Cthulhu his own bad self!

Along the way, the outmatched Ghostbusters, as their vaunted proton packs do little good against the horrors of the Mythos, get some help from occult professor Alice Derleth and a collector of Weird Tales Magazine called “Mr. Howard,” consult the Book of Dyzan and the Pnakotic Manuscript, and then must race off to Cony Island to stop Cthulhu. Now the ending of this episode is admittedly far more The Beast from 20,000 Fathoms than anything H.P. Lovecraft ever wrote, but it is still fun and kind of appropriate (although some fanboys may still gripe), as nothing the Ghostbusters throw at Cthulhu, not even calling upon the help of Nodens, seems to stop the Great Old One. Hell, there’s even a Scooby-Doo-like unmasking of the cult leader at the end.

Oh, and speaking of Scooby-Doo…but no, that will have to wait for another day. 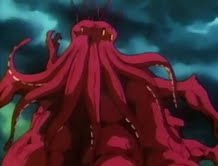 Final Verdict: “The Collect Call of Cathulhu” is amazingly Lovecraftian. Not only does it namedrop aplenty, and have nods and winks that only the truest Cthulhuheads will get, but it treats the source material well and doesn’t just use it as comic fodder. Sure, there is plenty of funny in this cartoon, but it’s not mean-spirited and it’s the same kind of jokes we lovers of Lovecraft would make. A favorite line of mine was: “How hard is it to find a guy as big as Godzilla wearing an octopus hat?” Or, when discussing the Necronomicon: “I bet the copyright page alone has a PKE variance of 9.9.” If you’re a Lovecraft fan – and I am assuming that you are, since you’re reading this – then do yourself a favor and spend 22 minutes basking in the warm glow of this 80s cartoon. I’d bet you a signed copy of Unaussprechlichen Kulten that you’ll get a kick out of it.

Oh, but you don’t have all the episodes of The Real Ghostbusters on DVD? Well, fear not. A little tentacled birdy told me that the entire episode of “The Collect Call of Cathulhu” just might be on YouTube right now, should you want to see it. If you do, go today before the fearsome high priests of copyright enforcement banish it back to the dark unknown.