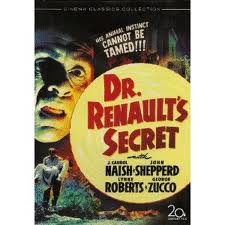 Welcome back to the Vault of Secrets, where, every other week, we’ll be unearthing a classic (or not-so-classic) vintage horror film for your delectation. Tonight’s installment is a bit of mad science called “Dr. Renault’s Secret“. The version I watched is from the Fox Horror Classics Collection, Volume 2.

Considering that it’s a movie featuring mad scientists, ape men and murder, Dr. Renault’s Secret is actually surprisingly quiet and restrained, even for one of these old pictures. The titular secret is an ape that’s been surgically and behaviourally modified into a man, played to perfection by J. Carrol Naish, who was no stranger to horror pictures and whom we have previously seen as the hunchback, Daniel, in House of Frankenstein. Naish is quite literally the star of the picture. Not only does he get top billing, but his performance is really the best part of the film. George Zucco, another horror mainstay whom we also previously saw, however briefly, as the doomed Professor Lampini in House of Frankenstein, has his name in the title and gets to chew a bit of scenery as Dr. Renault, but the show really belongs to Naish.

In spite of a few nice stock bits – including a knife-wielding arm coming from a secret panel and a climactic encounter on a water mill – there’s not actually terribly much on-screen carnage. And what there is of it is perpetrated more often by the criminal Rogell (played by career movie thug Mike Mazurki) than by Naish’s Noel, though the ape man does get to run at least a little bit amok and then redeem himself before the closing credits, which, as in so many of these movies, roll literally the moment the “monster” is dead.

Dr. Renault’s Secret may be more charm than actual suspense, but it’s a pleasant and breezy watch, with a couple of good performances. It’s maybe not a great classic, but it’s certainly worth a look, especially if you’re largely unfamiliar with Naish, or are just looking for a good movie about a not-so-mad ape man.

That’s it for tonight’s installment, but join us next time when we hit up a couple of Hammer classics, pairing Peter Cushing and Christopher Lee, that don’t have the names ‘Dracula’ or ‘Frankenstein’ in the titles.