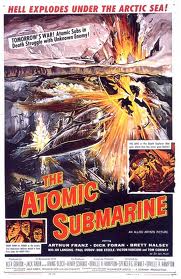 Welcome back to The Vault of Secrets. You may notice that we’ve done some remodeling around here and we’ll be taking a slightly different approach to the program from here on. Instead of two films a month, we’ll only be doing one, but we’ll be devoting a bit more space to each film.

Given how much time I’ve spent watching and reading about old sci-fi and horror movies over the years, it’s surprising that I’d never even heard of tonight’s movie before Criterion released it as part of their Monsters and Madmen set, alongside Corridors of Blood, The Haunted Strangler and The First Man in Space (with a jaw-dropping cover by comic phenomenon Darwyn Cooke). It’s especially surprising, given the film’s incredibly bizarre premise, which seems like the sort of thing people would talk about more.

Basically, the story goes that, in the then-near future of 1968 (!), there’s a major lane of commercial and passenger traffic conducted by submarine beneath the Arctic Circle. So far, so awesome, right? Problem is, strange things keep happening to said submarines, and the biggest, baddest submarine of them all (The Tiger Shark) is called in to find out what and put a stop to it. Where the real next-level craziness starts in is with that “what”. You see, it turns out that the submarines are being destroyed by a flying saucer. An underwater flying saucer. That’s right: It’s Atomic Submarine vs. Flying Saucer, underneath the North Pole. (It’s not quite Zeppelin vs. Pterodactyls, but this has the advantage of actually existing.)

The Atomic Submarine is exactly as ridiculous as that all sounds, though (unsurprisingly), not actually as awesome. It’s one of the last films by director Spencer G. Bennet, veteran of a lot of pulp adventure movies with titles like ‘Captain Video, Master of the Stratosphere’ and ‘Phantom of the Jungle’. He’s a good choice for the material, which is basically just a serial adventure in feature length, though the story goes that producer Alex Gordon’s first choice was Edward L. Cahn, whose filmography is equally extensive and equally dubious, but boasts a lot more cheesy monster fare like The Four Skulls of Jonathan Drake, Zombies of Mora Tau, and It! The Terror from Beyond Space. It’s about as good as that pedigree would make you think, sitting somewhere just above Mystery Science Theatre 3000 level (if that). Of especial silliness is the requisite overly-dramatic narrator, who not only hammers home the film’s themes (such as they are) and reads you all the things that the Captain writes in his log (which you also see written on the screen), but gets to deliver lines like: “The Tiger Shark began relentlessly stalking her space enemy.”

The over-the-topness doesn’t end with the narrator, though. Besides the 50s equivalent of the usual cast of characters onboard the ship, and their miniature soap opera plotlines, there are a lot of shots of a tiny model of a submarine moving around and eventually exchanging non-blows with a tiny model of a flying saucer. And then, once the protagonists finally get inside the flying saucer, there’s a really terrible space alien that’s basically just a big eye mounted on top of a mass of mossy coral – or fungal-looking stuff – and then some tentacles that don’t do anything but jerk back and forth a lot. The alien is the usual self-important, telepathy-having would-be-genocidal invader, who gets lines even sillier than the narrator does, such as, when explaining how his telepathy works: “We exchange wave-thoughts.”

I actually think that the alien was a partial inspiration for Kang & Kodos from The Simpsons. Not only does he look a little bit like them, but he acts a lot like them and his voice even sounds similar to theirs.

In the end, the humans manage to destroy the alien and his ship with the world’s most boring missile launch sequence, but we’re left with a “Keep watching the skies,” maybe-they’ll-be-back ending. What’s really strange, though, even for a movie from the 50s, is that the theme of the picture, to the extent that it has one, seems to be that war (and also, atomic power) is just awesome forever.

One of the chief non-sub-versus-alien conflicts in the movie involves a feud between a resident scientist with strong pro-peace, anti-nuke views, and one of the commanding officers on the ship. By the end of the movie, the peace-mongering scientist has learned his lesson, and even gets to give a speech about the importance of standing armies and nuclear weapons. You don’t get to see that in a movie every day.

That’s it for tonight’s program, but don’t forget to join us next month, when we’ll be setting sail for another cheesy nautical monster movie, this one of a somewhat later vintage.