[dropcap]I[/dropcap]n 1895, H.G. Wells began his classic first masterpiece The Time Machine with a short lecture on the fourth dimension: Time. Clumsy as this was literarily, it was necessary to ‘preload’ the story for his audience. Every time travel story since hasn’t had to bother. Wells was a scientist. He felt it necessary to scaffold his tale with Science. He could have written a fairy tale in which his hero goes to the future. Or a Dickensian ghost story could have revealed what was to come. Or it could have been (wait for it)…a dream. But the end result would have been less convincing, as the early SF and fantasy writers of the previous century are to us today. If logic and reason are the underpinning of your way of thinking, they are much more convincing than any fancy, no matter how well-constructed.

In the 1920s and 30s, science fiction finally caught up with Wells. The Pulps were full of stories with “Dimension” in the title. Murray Leinster, the Dean of Science Fiction, for instance, wrote two: “The Fifth Dimensional Catapult” (Astounding, January 1931) and its sequel, “The Fifth Dimensional Tube” (Astounding, January 1933), both typical entries for the period. A scientist creates a machine that allows him to cross the dimensions, only to be attacked by weird creatures known as the Ragged Men. It shouldn’t be surprising that this kind of tale found its way into the Lovecraftian fold, largely through Frank Belknap Long, who would become predominately a science fiction writer in the 1940s and 50s.

Long wrote three Mythos tales that explored the idea of other dimensions with more and more complexity. In the 1960s, he would come back to it again in the novel, Journey Into Darkness (Belmont Books, April 1967). But let us concentrate on the Mythos tales, in particular. The first was “The Space-Eaters” (Weird Tales, July 1928). In a Wellsian style, Long has friend “Howard” (a thinly veiled version of HPL) discussing the difficulty of writing a truly terrifying story, not merely hinting at cosmic horror. (It is easy to imagine this part of the story is based on actual conversations in their 15-year-long friendship.)

In a rather clumsy fashion, this conversation is interrupted by the arrival of a neighbor, Henry Wells (what a giveaway!), who has been attacked 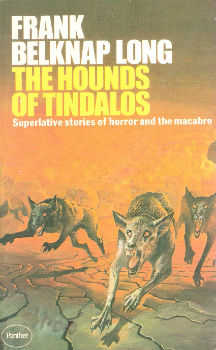 while in Mulligan’s Wood. The nature of the attack is exactly that which Howard had been describing minutes before – a weird arm-shaped form boring a hole in the man’s head. Wells cries they are in his head, eating away at his brain, burning like cold fire. He flees into the night. His terrible screams force Frank and Howard after him, encountering the unseen terror and holding it back with ancient ‘cross’ hand movements and matches. The last is a most un-Wellsian choice. But the monsters aren’t done with the duo, and the story ends with Howard dead and Frank seeing a small portion of what the monsters really look like. This tale, though similar in plot to other Mythos stories like “Haunter of the Dark” and “Shambler From the Stars,” has much discussion of what ‘Howard’ calls “…the 4th, 5th or 100th dimension….” These sections are small, but will grow in time.

Long’s second attempt is shorter but oddly longer. “The Hounds of Tindalos” (Weird Tales, March 1929) features another eccentric named ‘Chalmers.’ Using high-level math, drugs and some religious mantras, he plans to travel beyond reality. This time, the explanations fill paragraphs as the author explores the idea of passing beyond our realm of existence.

Chalmers returns injured, for he has encountered creatures that dwell in the fifth dimension, the Hounds of Tindalos. To escape them, he plans to plaster all the corners of the room so that no angles remain, for they travel through angles. Not unexpectedly, Frank returns to find the traveller has failed, his head removed and placed on his body, covered in blue pus. Less clumsy than “The Space-Eaters,” and better timed, “The Hounds of Tindalos” is long on esoterica but short on action. Despite this, it is better remembered than the earlier tale.

Finally, in 1931, Frank Belknap Long pens his Mythos masterpiece, the two-part novella, The Horror From the Hills (Weird Tales, January and February/March 1931). This tale begins with curator Algernon Harris receiving the statue of Chaugnar Faugn, a weird Asian relic. Clark Ulman, the man who retrieved the statue, appears crazed and deformed, begging to destroy the statue. He hints that the statue has been feeding off of him. Chaugnar Faugn is described:

Words could not adequately convey the repulsiveness of the thing. It was endowed with a trunk and great, uneven ears, and two enormous tusks protruded from the corners of its mouth. But it was not an elephant. Indeed, its resemblance to an actual elephant was, at best, sporadic and superficial, despite certain unmistakable points of similarity. The ears were webbed and tentacled, the trunk terminated in a huge flaring disk at least a foot in diameter, and the tusks, which interwined and interocked at the base of the statue, were as translucent as rock crystal. The pedestal upon which it squatted was of black onyx: the statue itself, with the exception of the tusks, had apparently been chiseled from a single block of stone, and was so hideously mottled and eroded and discolored that it looked, in spots, as though it had been dipped in sanies. The thing sat bolt upright. Its forelimbs were bent stiffly at the elbow, and its hands – it had human hands – rested palms upward on its lap. Its shoulders were broad and square and its breasts and enormous stomach sloped outward, cushioning the trunk. It was as quiescent as a Buddha, as enigmatical as a sphinx, and as malignantly poised as a gorgon or cockatrice. Algernon could not identify the stone out of which it had been hewn, and its greenish sheen disturbed and puzzled him….

Ulman dies. A night watchman dies. Harris knows something is wrong, for he knows the statue has changed the position of its trunk. He seeks out the help of a mystic named ‘Little,’ who waxes for whole chapters on the fifth dimension. Long buries a story within the story as Little recounts a dream he had about Romans attempting to put down a cult in the Pyrenees. (The actual story his dream is based on is H. P. Lovecraft’s “The Very Old Folk,” written on Thursday, November 3, 1927, but never published in any magazine, so Long must have read the manuscript.) The dream supplies information about Chaugnar Faugn and his brothers.

While all this chin-wagging is going on, Chaugnar Faugn gives up pretending to be a statue and goes on a rampage in New Jersey (shades of the 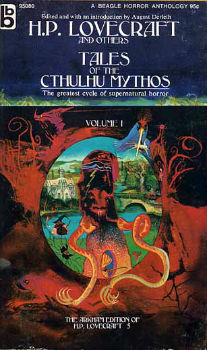 1950s B Movies!) Fortunately, Little isn’t just a tarot card reader but a scientist of an occult nature. He has created a machine that projects time, effectively acting as a disintegrator. Using this, they chase Chaugnar Faugn all over the coast, until they trap him in a bog and de-time him back to his original form, banishing him from Earth.

The plot sounds familiar to us in the 21st Century, but what Long does between the action bits is build a complex pseudo-scientific structure, using current physics, to convince the reader of the un-convincible. He has learned it from Wells and perhaps isn’t quite as good at it – but sufficiently. And this is one of the beautiful things about the Mythos. It can be science fiction. Just as it can be pure horror. (“The Outsider”) Or fantasy (“The Cats of Ulthar”) The Wellsian elements are as strong as the Dunsanian or the Poesque. Lovecraft was fond of all three and wove their fibers into the fabric of the Mythos.

Many Mythos writers, along with Frank Belknap Long, were also SF writers. Clark Ashton Smith appeared in Astounding, Stirring Science Stories and Wonder Stories. Lovecraft sold Hugo Gernsback “The Color Out of Space” (Amazing Stories, September 1927) and “The Shadow Out of Time” appeared in Astounding, June 1936. Others include Henry Kuttner, Fritz Leiber, Robert Bloch, and E. Hoffman Price. And it isn’t just Mythos writers. John W. Campbell, the SF editor who created “The Golden Age” of SF, gave us “Who Goes There?”, the basis for the Lovecraftian film, The Thing (now three versions). Science fiction can be horror.

So, for a Mythos writer, using some science fiction background can be useful. I wouldn’t recommend the Science of 1927, though (unless your story is set in 1927). Keeping up to date on current theories such as Quantum Mechanics, Chaos Theory or String Theory will offer new opportunities to create horror. Anything that shakes our quiet world can offer up new chills, can bring us closer to addressing “Howard’s” problem from “The Space-Eaters”:

I wanted to make my readers feel and see that thing from another universe, from beyond space. I could easily enough hint at it or suggest it – any fool can do that – but I wanted actually to describe it. To describe a color that is not a color! a form that is formless! … Unfortunately I am not a mathematician. I am only a poor fool of a creative artist, and the thing from outer space utterly eludes me.