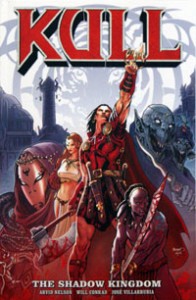 Robert E. Howard wrote some Cthulhu Mythos stories, though most are admittedly minor ones. His Serpent Men were coopted into the cycle by H. P. Lovecraft in “The Whisperer in Darkness” (Weird Tales, August 1931), thus creating an entire branch of the Mythos dedicated to these loathsome snakemen and their degenerate children. “The Shadow Kingdom”, the story first featuring the Serpent Men, was published in Weird Tales in January 1929, and is important for another reason. It is the first full-blooded sword & sorcery tale, as well. Howard had been trying out his ideas for a horror-oriented, fantasy-style tale with Solomon Kane, previously, but it is only with the creation of King Kull, the ancient Atlantean world of Valusia, and the insidious Serpent Men, that the mix is right.

I’ve pontificated on how the Conan stories belong in the Mythos (at least, tangently) at length in “Conan and the Cthulhu Mythos”) (You can find it here), so I’m not going to cover that ground again. I’m not really that interested in nit-picking, anyway. What interests me more is how HPL’s ideas helped to enrich Howard’s invention. Taking the excitement of historical fiction (such as the stories Howard read in Adventure, or work by Harold Lamb, for instance), adding Howard’s own Dunsanian Fantasy world and, finally, the monsters that could only exist in a reality of the cosmic horror of Lovecraft, we get the final form of sword & sorcery. Nothing was quite like it before Howard and everything would change after him.

“The Shadow Kingdom” tells the story of Kull, a barbarian who has taken the crown of Valusia by force, and his struggles to keep it. There is dark sorcery afoot in the castle of the King, and his only allies, the equally barbaric Picts, must help him to survive a terror that threatens his throne, his soul and the safety of the human race. Kull has his work cut out for him in facing the shadowy Serpent Men, who can assume the likeness of any man. Howard ends the ghostly tale with a splendid fight scene, in which Kull battles a room full of snaky assailants. The final product features bloody combat, ghostly spirits, and cloak-and-dagger maneuvers, all dressed in medieval splendor and romance.

The Howardian tale deviates from the traditional Lovecraftian story, outside of the window-dressing of time period, in one important way. HPL worked in a form based on the ghost story, in which his hapless hero eventually perceived the staggering vastness of cosmic horror. The point is often that we are small, unimportant specks in a terrifying universe. Howard’s fantasy does not embrace this philosophy entirely. Whether it is Kull, Conan, or Turlogh O’Brien, the barbarian warrior, no believer in civilisation, rails against the forces of darkness, fighting with his sword, his body, his brain. Despite Howard’s brooding mood, it is still one of survival against the universe; no crying, simpering victims need apply.

As would be expected, the sword & sorcery tale does not usually achieve the same pitch of fear as does the Lovecraftian terror tale, largely due to this Darwinian attitude of the hero. Still, there are rewards to be had from the sword & sorcery tale. Instead of the pure frisson of horror, there is the colour of the fantastic background. In the hands of C.L. Moore, in her Jirel of Joiry stories, in the best of Jack Vance or Fritz Leiber, this is enchanting, fascinating and evocative. There is also the pulse-pounding action of battle, personal or epic. In this, Howard is closer to J.R.R. Tolkien, who also knew how to evoke a chill (remember the Black Gate, Cirith Ungol and Shelob’s lair). 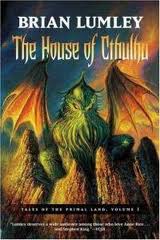 There have been other writers who have used the Lovecraftian style of fantasy. (See my piece on Lovecraft’s own fantasy works) The stories of the ironic Clark Ashton Smith feel like they sit halfway between HPL and REH. “The Testament of Atthammaus” (Weird Tales, October 1932), “The Charnal God” (Weird Tales, March 1934) and “Necromancy in Naat” (Weird Tales, July 1936), to name but three, all have the same combination of weird magic that Howard possesses.More recently, Brian Lumley penned similar tales for Weirdbook, collected in The House of Cthulhu (1984). These are what I think of when people use the term “dark fantasy” instead of “horror”. I’m sure it’s incorrectly used, but they are “dark” and “fantasy”. The term “sword & sorcery” is better known.

I would finish with this last thought. Mythos is not a genre in itself, but an idea that attaches itself to genres. There exists Mythos science fiction, just as there are Mythos westerns and Mythos mysteries. I know. I’ve written all of them. The trick with any Mythos genre story is that it must stay true to both halves of the equation. It must be horror and fantasy to be good sword & sorcery. An example of what this is NOT is best illustrated by the Howard’s Kull story, “Swords of the Purple Kingdom”(written in 1928), in which Kull faces no supernatural foes, but fights a great battle on an ancient stairway. The story was written for Adventure not Weird Tales. The writing is fine, but, without fantasy elements, it lacks the spark that “The Shadow Kingdom” has. (I almost (but not quite) wish L. Sprague de Camp or Lin Carter would have written in a monster or two, as they did with some of the Conan stories.) It is not necessary for sword & sorcery writers to name the deities of Lovecraft’s Mythos. They may want to create their own pantheon of terrors, albeit to evoke the same dark, lurking sense of the universe against the hero. Lovecraft’s cosmic horror added jet fuel to Howard’s fantastic visions. It can do the same for you.