New, non-remake, non-sequel horror movies are as rare as a lingerie model coming from Innsmouth. Good new horror films are all but 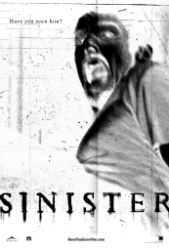 mythical. Yes, I’m looking at you, The Apparition. So, when a horror flick comes out that’s both new and good, then I’m happy to pick up the pompoms and cheer for it. And if that movie also has Lovecraftian overtones, then I’m all but ecstatic for it. So, let me share a little bit of my ecstasy with you as I rave about this Sinister little movie. Ha, see what I did there? Yeah, I knew you would.

In Sinister, actor Ethan Hawke plays a true crime author named ‘Ellison’ who had a big hit some years back and has been trying to recapture that magic ever since. Desperate for inspiration, he moves his family right into a house where the previous owners were hanged all together from a tree in the backyard. Well, they all died together except for a young daughter who went missing. Yep, with that setup, I’m sure nothing bad is gonna happen here.

All too soon, Ellison finds a box of old Super 8 movies in the attic that sound like home movies with titles like “Pool Fun,” “Yard Work,” and “Hanging Out.” Hmm, I wonder what that last one is about? You guessed it – it’s a home movie showing the family during their mass hanging. Worse yet, each movie shows a different family being group-snuffed going back years and years. Naturally, Ellison is disgusted and disturbed by the murder movies, but he’s also intrigued as he sees the subject of his next book growing into a best seller right before his eyes. With visions of fame filling his head, he’s not going to let anything stand in the way of his unraveling this mystery. Certainly not his wife’s disapproval when she finds out that they’re living in a death house, or all the weird noises he hears at night, or the strange visions that move in the corner of his eye, or his son suffering night terrors, or his daughter starting to draw creepy pictures on the walls of things she should know nothing about. Hell, not even the discovery that all the dead families have a connection: Each one lived in a house previously occupied by one of the other dead families. You know, just like Ellison and his family is doing right now. Yep. Nothing. Wrong. Here.

So, right about now, I bet you’re thinking that this sounds like either a ghost story or one about a serial killer with a home movie fetish. Well, it has a little bit of both of those in it, but there are also some Lovecraftian elements to it and that’s why I’m talking about it here and now. But just like the Cthulhu Mythos, some knowledge is better left unknown, so consider this a SPOILER WARNING.

The evil that connects all the dead families together is an ancient deity named ‘Bagul’ that, for some reason, sort of has a silly clown face. Yes, it really does. You don’t see him/it clearly for all that long in this movie, but, when you do, it does look like an evil clown. Sure, that’s scary, but that’s the face of your ageless evil god that eats the souls of children? Bobo on a bad day? Well, as questionable as the Big Bad’s looks are, his methods are nonetheless pretty darn frightening. He’s an old god of death, murder, madness, basically all things icky, and he likes to snack on the souls of kids. Charming. He also has a neat trick: Any image of him is him. He lives on through those images and that includes paintings, statues and, yes, even Super 8 movies. Further, just like some aspects of the Mythos, or the old chestnut about staring into the abyss, the more you look into him, the more he looks into you. So, with our true crime author watching all of Bagul’s horrific home movies, how long before Ellison and his family are starring in their own snuff film?

End of the SPOILER SPACE.

Final Verdict: Sinister is a fun and surprisingly effective fright flick. It’s directed by Scott Derrickson who admittedly has had a spotty genre record before this. The Exorcism of Emily Rose was good, if sometimes dull. Hellraiser: Inferno was just plain bad, but then, so have been all of the last six Hellraiser movies. And The Day the Earth Stood Still with Keanu Reeves is just laughable. However, here, he’s at the top of his game. There are some good shocks and scares in this movie, not to mention effective moments of creepy dread. The acting is well-done for the most part, with Ethan Hawke as the high point and Juliet Rylance as his wife as the low point. I don’t know if that was the actor’s fault – it could be how the wife was written – but she’s as one-note as a character can get. Even the kids do a pretty good job and I usually don’t care for child actors. As for the Lovecraftian elements, I could easily see this ancient evil being at home with other aspects of the expanded Cthulhu Mythos. It sort of has an Y’golonac vibe to it. It’s not as alien as Cthulhu and Company in its dealings with the theme of corruption, and uses media (Y’golonac has his book; this guy has his movies) to reach out to its victims. So, if you’re looking for a new horror movie with something to offer and shades of Lovecraft around the edges, give this Sinister movie a try.