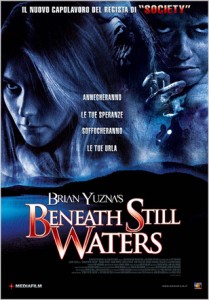 It’s 1965 and the town of Marienbad in Spain is about to be flooded by a new dam. Two little boys decide to explore the town right before it floods. Do they get caught by the rising waters? No, something worse. They discover a Satanic ritual, complete with human sacrifice, an evil book, and ghouls. One of the boys tries to stop it. He’s caught and eaten, while the other boy flees up into the rising waters.

Cut to 40 years later. A young woman has a weird dream/vision of her grandfather, who rises from the dammed lake to warn her about something before dissolving back into the water. Later, she and another young woman go swimming and are scared by the friend’s idiot boyfriend. The friend twists her ankle in something underwater, so Girl #1 helps her back to the shore. Idiot Boyfriend fools around in the water and mocks them until he’s yanked under the surface for real.

Meanwhile, a photojournalist is investigating the history of the dam and discovers a crack in its wall while diving to look at the sunken town. Is the dam about to burst? And what lies beneath the water?

First, there are the stock neo-Lovecraftian characters. The cocky journalist with a tragic past, the local professional female (who is, of course, related to a major backstory character), her rebellious daughter, the prophetic old fart whom nobody listens to until it’s too late, all of them given no depth (if you’ll pardon the pun), none well-acted. Characters are introduced and die immediately afterward, while the main characters stand by, insincerely expressing horror over the deaths of people they (and we) barely know, instead of helping them. The villain shows up from time to time, mainly to remind us that he’s there and that he’s, like, coming. Soon, real soon. Any time, now.

One of my favourite WTH?! moments comes early on when the journalist, gone out diving alone on the lake until well after dark, pops up in the middle of a search party for the missing boyfriend. And all they say is, “Don’t you know we’re looking for a missing boy?” You’d think they’d be asking him if he saw a dead body down there, especially since we just saw him being stalked underwater by a gnarly, disembodied arm.

And then there’s the setting. I love stories of sunken towns. I love underwater horror and anything that involves lots of diving scenes. I like stuff set in Spain. Beneath Still Waters manages to suck all of the fun out of the sunken town premise (not to mention the Lovecraftian goodness of an entire town being taken over by the Devil). The diving scenes are too short, illogical (Our intrepid diving hero does things no experienced diver would do), and never built up enough to generate any scares. In fact, far too much of the action occurs aboveground when all the fun is down below, in the sunken town. As for the setting, this story could be anywhere. There is nothing uniquely Spanish about it (as opposed to, say, Dagon, which Beneath Still Waters director Brian Yuzna co-produced). And whaddaya know? The apparently-superior novel on which the film is based doesn’t appear to be set anywhere near Spain.

If that weren’t sufficiently awful, we even get a pointless Mary Sue in the heroine’s daughter, and her “destiny” is infodumped to no purpose in the middle of the climax, what with people going zombie-nutty and weird shit happening just for the sake of weird shit happening. And don’t get me started on the “surprise twist ending” that was anything but, and made no sense.

Needless to say, Beneath Still Waters is too awful to be worth paying money to see. But don’t fret–SyFy often runs it in the wee hours, so you can flagellate yourself with it for free. Still, if you must buy it to complete your Mythos or Brian Yuzna collection – in widescreen, no less….

You can buy Beneath Still Waters on Amazon.com.