[dropcap]W[/dropcap]hat is surprising about Mary Shelley’s legacy is not that it is so large but that it is so largely ignored. It looms like the shadow of some nameless thing across both science fiction and horror, while everyone pretends that it’s not there. Whenever I hear someone say with great confidence that women writers are new to horror and science fiction, that we aren’t listed in the greatest hits or the history books because our roots in the speculative genre are shallow, I think, Well, what about Mary Shelley, dummy? The father of our entire genre is a mother!

And what a mother. Oh, Lord.

Nor was Shelley alone, even in her time. There were, of course, the Brontës. But she was unique. And surprisingly prolific. Many think that because Frankenstein (1818) was such a foundation of the genre, so scientific and so gothic, that its author was a one-hit wonder and an amateur who huddled alongside her more-famous lover and husband, Percy Shelley. She was anything but. Seven novels; dozens of short stories, poems, articles, and children’s books; travel narratives; several biographical anthologies; and her work on editing and translating Percy’s poetry. That’s just the published stuff. It’s doubtful Percy Shelley would be nearly as important today without the indefatigatible efforts of his wife. But that was hardly all she left behind.

Mary was a professional writer at a time when few women wrote (or were even literate) and it was one of the few careers a respectable woman could take on that didn’t involve baby-making. She resorted to it after Percy died, to support their young son, the only one of their children to survive infancy. Her diaries at the time she wrote Frankenstein clearly show the influence of postpartum depression and the recent loss of a child on the story, even more than the famously cold and wet summer that year. A grieving mother wrote that book.

Oddly enough, the popularity of Frankenstein for a long time diminished her reputation as a forward-thinking writer, since it was the least iconoclastic of her novels. It was assumed for quite a while that she had not followed in the footsteps of her illustrious mother, the feminist philosopher, Mary Wollstonecraft, author of Vindication of the Rights of Woman. Mary’s namesake mother had died of childbed fever ten days after her birth. She might be forgiven for feeling a bit smothered by maternal memory.

But her other novels have strong female characters and themes. Frankenstein is an early fluke, written when she was still a teenage mother and in the throes of a scandalous affair with an older married man (Percy). As she matured, so did her writing. Even so, the raw emotion and vivid imagery of the book made it the only famous work to come out of Percy Shelley’s challenge to write a horror story during the chilly, wet summer of 1816.

Some have criticized the novel as dry, more a book of ideas than of fast-moving plot and deep characterization. While one might allow this, I’d add that this is a common feature of many a famous later Hard SF novel. This subgenre is quite frequently all about the ideas – in Frankenstein‘s case, 18th century galvanism and reanimation of dead tissue, and Renaissance alchemy, as well as a sociological critique of the contemporary sterile, male-only view of science. The only difference between most other Hard SF novels and Frankenstein is that those others were written by men. It seems that a female pioneer in the field just can’t win. Write a science fiction story with emotion and vivid characters in it, and it’s not real hard science. Write the first modern Hard SF novel and everybody scrambles to hopskip right over you to get to swashbuckling Jules Verne.

Mary’s influence on the field isn’t limited to Frankenstein, which was heavily influenced by contemporary Gothic horror. Though most 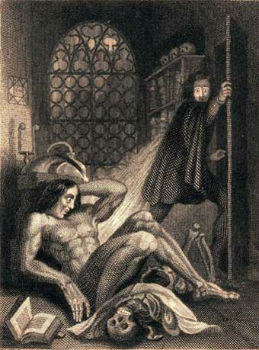 her novels are historical, The Last Man (1826) is the first modern novel about a science fiction apocalypse. In it, everyone is dying of a plague. The story follows the last survivors as they try to get by in the ruins. Many tropes that you will find in later zombie and scientific vampire novels (like I Am Legend) can be found here, right down to the On the Beach-style loneliness and philosophizing.

Similarly, all those fears about science-gone-amuck (the Creature), and cold-blooded scientists who do terrible things in the name of Knowledge (Dr. Frankenstein), come from Frankenstein. Not to mention that Mary cleverly never gives a full description of the Creature. He is a high-minded and sensitive individual who falls prey to murderous and vengeful rage after being repeatedly rejected and abused by society (The subtitle of the book is ‘The Modern Prometheus,’ invoking a sacrificial pre-Christian figure of mythology). However, if you take into consideration Frankenstein’s extreme and hysterical bias toward his creation, there is little in the Creature’s physical description to explain why humans reject him. He could be anything from cringingly ugly to angelically beautiful. As far as we can tell, people just sense something off, something wrong, about him and they respond with extreme prejudice.

The Creature is an early embodiment of our paranoia about playing God, which we project onto our creations, punishing them for our own sins. In the book, we are the true monsters. And in every nuclear or environmental disaster flick, we mouth Mary Shelley, like puppets that don’t know they’re only wood.

It is not a big surprise that Mary Shelley’s books have influenced both science fiction and horror so much. She had big ideas and those tend to catch people’s imaginations even more than big plots. More depressing, it is not really a surprise that she gets handwaved off the classics so much as a woman, either. After all, when you’re drawing up an historical list of famous speculative writers and you’ve got no women on it, it can’t be too comfortable to have the Mother of Science Fiction Horror looking over your shoulder with a disapproving frown.